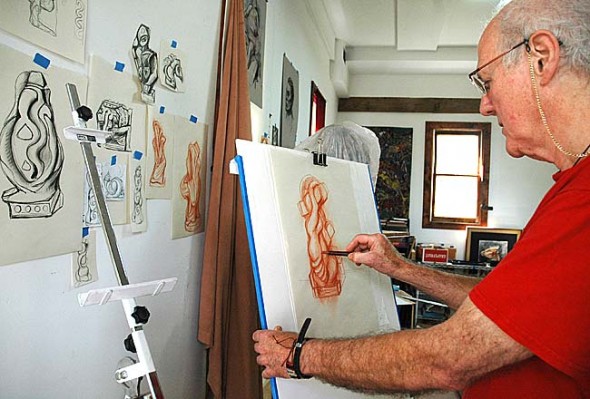 Local sculptor Brian Maughan is one of four artists selected for the Yellow Springs Experience: National Bronze Symposium, Oct. 13–26 on the Antioch campus. Last week at his home studio on N. Walnut Street, Maughan worked on preliminary sketches for one of the four contemporary bronze sculptures he will create during the two-week symposium. Later the 12 completed pieces will be erected as part of a downtown sculpture trail. (Photo by Megan Bachman)

Sculptors go for the bronze in the Yellow Springs Experience

An ancient method of casting bronze sculpture that was revived 90 years ago at Antioch College is returning to the campus and community. During a national bronze symposium on the Antioch campus in October, four artists will create 12 original sculptures to be installed as outdoor public art here next year.

Last week the three symposium artists selected by a national jury were announced. Joining Brian Maughan of Yellow Springs, who was previously invited to participate, are John Weidman of Brookline, N.H., D’Jean Jawrunner of Tucumcari, N.M. and Susan Byrnes of Cincinnati. About 40 artists submitted proposals.

The four sculptors will create contemporary bronze pieces about 16 inches in height which will be erected on pedestals throughout the community as part of the Bronze Sculpture Trail to be completed in June 2014. Sculptures are slated for the campus of Mills Lawn Elementary School and the wall along Dayton Street near the Spirited Goat Coffee House. The final two locations will be on downtown retail property, with three businesses being considered — Yellow Springs Chiropractic, The Winds Wine Cellar and the Yellow Springs Federal Credit Union. Earlier this year, Village Council agreed to maintain the public art for 10 years, at an estimated cost to the project of $1,000.

While designs have yet to be finalized, Byrnes’ sculptures for Mills Lawn are creative takes on a nest of baby birds and Maughan’s forms express the village’s proclivity for arts, yoga, dance, music and horseback riding, he said. Maughan chose to create an abstract piece that spoke to the community he has lived in since 2006.

Maughan is a sculptor of 30 years who recently completed sculpture installations of radio announcer Bob Uecker and baseball commissioner Bud Selig at Miller Park in Milwaukee, Wis. His early career was in abstract bronze. Weidman attended Antioch College and also studied anatomy and dissection at Harvard Medical School to understand the human form. D’Jean Jawrunner has exhibited internationally and nationally next to Edgar Degas, Kiki Smith, and Andy Warhol. Byrnes is an artist, freelance audio producer and independent curator who produces conceptually-based art in a variety of media and has exhibited widely throughout the Midwest.

Local sculptor Jon Barlow Hudson, who has participated in more than 30 symposia around the world, has floated the idea of a sculpture symposium here for many years but the idea gained momentum in 2011 when an anonymous local donor put up $25,000 in seed funding, an amount later matched by the Morgan Family Foundation. This week organizers received two grants from the Ohio Arts Council totaling $16,228. The Yellow Springs Community Foundation previously kicked in $3,000. The same anonymous donor will cover the remainder of the costs for both the symposium and sculpture trail. The total budget for both is estimated at $150,000.

Bronze was chosen as the symposium’s medium in part to connect with a rich local history of bronze casting. The lost-wax casting process used to create bronzes for thousands of years was refined and commercialized in the 1920s at the Antioch Art Foundry, which later became Morris Bean & Company when Antioch student Morris Bean found an industrial application for an aluminum casting process.

Under Italian-born sculptor Amos Mazzolini, the Antioch Foundry grew to some prominence in the ’20s and ’30s, as it was said to be the only lost-wax foundry between New York and the west coast, and sculptures were commissioned from around the country. A flagpole base at the National Archives in Washington D.C., eagles adorning the Museum of Natural History in New York City and a massive 2,500-pound silver bust of Franklin Roosevelt Commissioned by the U.S. Department of Interior for Lake Roosevelt near Spokane, Wash. are a few of the works cast out of the foundry by Mazzolini. Closer to home is a bust of Arthur Morgan in Antioch’s South Hall and a set of 18-foot eagles perched on the Springfield Post Office.

By choosing bronze, the symposium also challenges its artists to take a contemporary approach to a traditional medium, according to symposium project manager Joanne Caputo.

“The unique call here was to create something that was totally abstract and totally opposite of that traditional bend — to create a new look at bronze,” Caputo said.

According to Hudson, bronze symposia are quite rare compared to those featuring works of stone, steel or wood, because preparing bronze sculptures for casting can be labor-intensive. Using the lost-wax method, the piece is typically first sculpted in clay, then inner and outer plaster molds are created from the original model, followed by a wax model and then a final fire-proof mold. The wax is eventually “lost” – or evacuated – during a heating of the ceramic shell before the metal pour.

Bronze has many advantages compared to other materials, according to the symposium’s foundry chief, Bernie Carreno. It is a beautiful and malleable natural material on which artists can create colorful patinas, tarnishes achieved by adding chemicals or letting nature take its course, he said. The green patina of the Statue of Liberty was caused by the natural oxidation of the bronze over time.

“What’s great about the bronze process it is lends itself to organic shapes nicely because of the way it patinas,” said Carreno, an Austin, Texas-based sculptor. “Because it is so warm in color it tends to bring a certain amount of organic feel to the piece.”

Education is a primary goal of both the symposium and sculpture trail, according to Caputo. During almost every day of the symposium sculptors will be working in public view at one of the Antioch Art Foundry’s former sites, near the amphitheater off of Corry Street on the Antioch campus. There are also evening public demonstrations and presentations by the sculptors and an exhibit and talk by Hudson featuring his maquettes for large-scale public sculptures.

Another educational opportunity is a planned collaboration with Yellow Springs Schools, supported by part of the Ohio Arts Council grant. Sculptors will spend three mornings working with students at Mills Lawn and Yellow Springs High School. At YSHS art teacher Elisabeth Simon has additionally developed a project-based learning unit on public art, during which students will create their own relief molds that will be cast in aluminum and erected as part of a student sculpture trail on the school’s campus.

School board member Angela Wright, who is also the great-grandniece of Mazzolini, is thrilled with the collaboration because it brings the community into the school and exposes students to the values of the community. It also furthers their education, she said.

“We want the arts to be an integral part of the core subjects our students learn,” Wright said. “If you can capture a student’s imagination with art, they can also learn to do writing and math. It becomes a fun adventure in education.”

The dramatic culmination of the two-week symposium, a sunset pouring of the molten metal, should be both educational and entertaining — Maughan calls it “a celebration at a safe distance.” One work from each artist will be cast that night, with the others completed over the ensuing months.

The first project approved by the newly-created Yellow Springs Public Art Commission, the sculpture trail is part of an Arts Council push for both more public art and more public support of art, Caputo said. The Arts Council is leading a campaign to raise awareness of the economic and cultural benefits that art brings to the community.

“Here there’s so much art that it’s taken for granted,” Caputo said. “Arts and culture strengthen the community. It makes you bond with the community and want to come to it, live in it and work in it.”

A sculpture trail of new modern artwork will add another dimension to an already eclectic mix of local public art, Caputo added.

Hudson said that public art sculptures are more than just pleasing to the eye, they give meaning to a community by “putting into material form ideas and symbols that reflect the culture.” From the earliest rings of stones in the British Isles to the building of totem poles and temples, sculptures like his “Tree of Knowledge,” which symbolizes the village’s rich heritage of educators, students, writers and tree-lovers, can make a location “a more special place.”

“It creates an environment that is more humanistic, that is more interesting to live in visually, intellectually and aesthetically,” Hudson said. “You’re marking this place as special.”