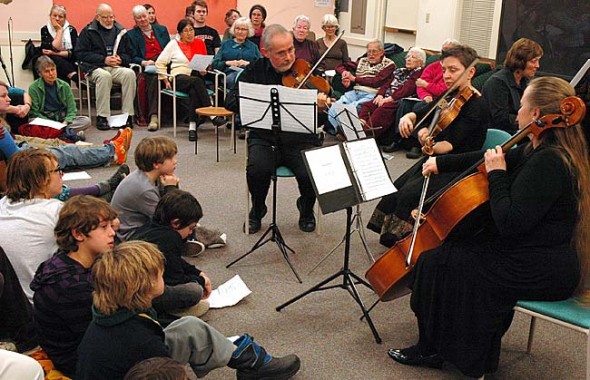 From left, Matthias Enderle, violin, and Wendy Champney-Enderle, viola, of the Zurich, Switzerland-based Carmina Quartet, will perform at the annual Friends Music Camp winter benefit concert at 3 p.m. Sunday, Dec. 29, at the Yellow Springs Senior Center. Here they perform at the 2011 concert. The Enderle family will perform this year with their daugher, Ciara, an up-and-coming cellist. Other Friends Music Camp alumni and instructors to perform at the concert include Martha Hyde, Martin Bakari, Minnita Daniel-Cox and local teen New Orleans-style brass band, Sassabrass. (Photo by Matt Minde)

Friends concert for a special camp

More than a decade ago, an 11-year-old Martin Bakari first attended Friends Music Camp as a trumpet player. This year, at age 26, the Yellow Springs native and accomplished singer graduated from Julliard and went on tour with jazz musician Wynton Marsalis as a vocalist.

But between rehearsals and auditions, Bakari also returned to teach this summer at the small Quaker music camp that he says helped him to become a well-rounded and thoughtful person and artist. That Bakari would leave New York City for the small town of Barnesville, Ohio, as his career takes off speaks volumes about the impact that the camp continues to have on him today.

“There are a lot of camps where you can learn to sing better, but Friends Music Camp is unique because the people who work there are as committed to teaching kids to play music as we are to teaching them to be thoughtful, confident, well-rounded, kind and spiritual people,” Bakari said this week.

Bakari is one of several Friends Music Camp alumni and instructors who will perform at its Winter Benefit Concert at 3 p.m. Sunday, Dec. 29, at the Yellow Springs Senior Center. A $15 suggested donation will support need-based scholarships and tuition reductions at the annual youth summer camp for ages 10 to 18, which cost a four-week camper $2,040 last year.

Others performing at the benefit are professional woodwind musician and composer Martha Hyde; professional violinists Wendy Enderle-Champney and her husband Matthias Enderle of the Zurich, Switzerland-based Carmina Quartet, who are performing with their 21-year-old cellist daughter, Chiara; vocalist Minnita Daniel-Cox; and local teen brass band Sassabrass.

The annual four-week Quaker-influenced music camp in rural southeastern Ohio, co-founded in 1980 by Peg Champney of Yellow Springs, continues to loom large in the lives of many of its local alumni. Just this summer, the camp spawned Sassabrass, a nine-piece New Orleans-style brass band made up of mostly Yellow Springs High School students after Connor Gravely-Novello, Josh Seitz and Maddie Allen, of Fairborn, were inspired by a class on New Orleans street music at the camp. In 2009 it also seeded local teen bluegrass-folk band Wheels.

Camp co-director Champney, who modeled the camp after her life-changing Quaker youth experiences painting slums in Philadelphia and the goal-oriented music camps her daughter attended, said the camp doesn’t teach a religion but “expands the life and souls” of its campers through Quaker values, which in turn makes them better musicians.

“We don’t teach Quakerism, we teach peaceful conflict resolution and caring for each other,” Champney said. “I think [Friends Music Camp] helps them become better people and if you are a better person, you are better at what you do.”

The camp-wide practice of a morning and evening silent group meditation called “collection” is another vital aspect of Friends Music Camp and a fond memory for alumni. Bakari said it is hard to find a moment of peace in bustling New York City, which collection allowed him to do on a daily basis.

“One of the things that really leaves an impact on everyone is collection,” Bakari said. “The idea is that our community is collecting together in one space and sharing in one another ‘s energy and collecting our own thoughts.”

To Martha Hyde, who has taught on-and-off at the camp since 1983 and continuously since 2002, the highly creative and non-competitive spirit sets Friends Music Camp apart from other music camps and keeps her coming back. Hyde, who grew up in Yellow Springs and is now a Brooklyn-based composer, multi-instrumentalist and music educator, says Friends Music Camp provides her a “living laboratory” for her original arrangements in a supportive environment while it helps youth learn valued life lessons.

“They are learning how to be in a group of their peers and build a flourishing community that is supportive and cares about its people,” Hyde said. According to Hyde, while the camp has changed somewhat over the years, from 25 campers to around 80 with a far greater variety of instruments, it has also retained its essential character. Not only are all levels of musicians accommodated at the camp, there is a lot of peer-to-peer and intergenerational mentoring.

“It’s a can-do spirit and we meet everyone right where they are at whatever level they are at,” Hyde said.

Over the course of two or four weeks, campers take classes like music theory (taught by Bakari this year), and life challenges (taught by Champney), participate in small and large ensembles and learn how to create their own music, among other activities and classes. Hyde started a jazz improvisation class at the camp that has also morphed into a more formal jazz band.

Champney, who has plans to step down as co-director soon, hopes that Friends Music Camp continues to change the lives of children as it has for more than 30 years.

“I hope they can find a way to keep it going because I think it is something special,” Champney said. “We hear from campers, ‘It changed my life. I learned more there in four weeks than I did in an entire school year.’ It’s the lifelong friends and the community experience that stays with them. The music is high up there too.”

Visit http://www.friendsmusiccamp.org/ for more information on the camp, which runs July 6–Aug. 3 next year.