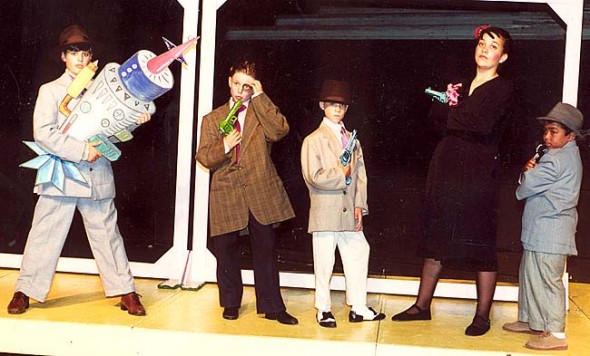 Yellow Springs Kids Playhouse is celebrating its 20th anniversary in 2014 with special events and performances. From left, Andrew Beal, Sam Jacobs, David Boyer, Sahara Lawson-Lance and Martin Bakari perform in “Dick Tracy: the Musical” in 1995. YSKP also hopes to reconnect with 1,200 alumni during the year to complete a survey on how the local youth theater experience influenced them. Alumni should contact YSKP at admin@yskp.org. (Submitted photo)

Ever wonder what happened to Dick Tracey, Homer Price, Frankenstein and James Bond?

So does Yellow Springs Kids Playhouse, the non-profit theater group that over the last 20 years has cast local youth in these and other roles. And as YSKP celebrates its 20th anniversary season in 2014, it hopes to reconnect with some 1,200 alumni from past shows to learn more about the impact of YSKP on their lives.

“It’s part curiosity to find out what they are now doing and part educational to see how the experience influenced them,” explained YSKP Executive Director John Fleming, who also writes and directs shows for the organization he founded nearly 20 years ago.

Famous alumni include actor Michael Malarky, a television star on The CW’s Vampire Diaries, and tenor Martin Bakari, a Juilliard graduate on his way to a promising opera career, but YSKP wants to know about the fate of hundreds of other alumni too.

“YSKP alumni are going on to become successful adults and whether they’re an artist or in an unrelated field I’m interested in how their exposure to the arts affected them,” Fleming said. YSKP hopes to conduct a longitudinal study to use in evaluating its impact on the community.

Fleming has heard from some alumni that taking part in YSKP helped them build such life skills as teamwork, problem-solving, public speaking, calmness under pressure and overcoming mistakes. Since YSKP produces mostly original work, its cast and crew have also learned how to create something from nothing. Productions have brought together kids who might not otherwise interact with — and accept — each other. And while there is always some mischief afoot, the youth learn the payoff of hard work as an intense three-week rehearsal in the summer heat is followed by “two weeks of sublime peforming,” Fleming said.

YSKP alumni, or their parents, are urged to reconnect by sending updated information to YSKP at admin@yskp.org or joining the YSKP Alumni Facebook page.

Alumni in town, along with all villagers, are also invited to a special event on Monday, Dec. 30, during which participants can share bad writing or embarrassing diary entries from their childhood. The event, “Kiddo! — Sh*t you wrote when you were a kid” is from 8 to 10 p.m. at Yellow Springs Brewery, 305 N. Walnut St.

Twenty years after it was founded, YSKP has a lot to celebrate. Every year around 50 children perform for 1,300 audience members; a total of 18 original musicals and nine original dramatic works have been produced. Shows have been a community affair, and Fleming said he is proud to have employed many local artists, musicians, playwrights, set designers, and costume designers throughout the years. Fleming also takes pride in the fact that since YSKP’s inception, not one child who tried out for a YSKP show has been turned away.

Fleming started YSKP in 1995 when he came to town with his wife, Louise Smith, who got a job in the Antioch College theater department, and saw the lack of local theater opportunities for youth beyond school plays. Fleming, a mime and actor, had worked in children’s theater in New York City and, he said, he has always enjoyed the challenges and joys of mentoring youth.

“If you treat kids as intelligent human beings, they do amazing things on stage,” Fleming said.

The first show, a version of Dick Tracey written by friends of Fleming’s who had worked on Sesame Street, was the first to be staged in the newly-renovated Antioch Amphitheatre, Fleming said. It cost just $3,000 with donations coming from Vernay Foundation, YSI Foundation and the Yellow Springs Community Foundation.

Today, productions cost ten times as much. At the same time, the arts funding landscape has changed. Some local charitable funds are no longer available, while state and federal grants are more competitive. So YSKP has had to get creative in recent years, collaborating with other groups and increasing the number of fundraising events. Major support for YSKP still comes from the Ohio Arts Council and the National Endowment for the Arts, but the non-profit can barely sustain its two part-time employees. Above all, it has been the support of the local community — parents, audience members and donors — that has kept YSKP going all these years.

“I think without the support of the Yellow Springs community it wouldn’t have happened,” Fleming said. “People support anything that has to do with kids but I think the community also supports and recognizes theater, which even though it is one of the oldest art forms, it’s not very popular.”

To celebrate its 20th season, YSKP has a packed schedule of fundraisers and performances, starting this weekend with a Winter Recital on Saturday, Dec. 14, as part of the Holiday in the Springs celebration at Glen Helen. In early 2014, YSKP is organizing a stand-up comedy workshop for adults culminating in a live community performance, producing GODZILLA written by Corrie Van Ausdal and performed by local teens and Antioch College students in February and putting on fundraisers like the Mardi Gras Gala in March and the Adult Prom in May, in conjunction with the Yellow Springs Browns Backers.

The annual YSKP summer show for youth this year is “Superhuman Happiness,” an adaptation of Ovid’s Metamorphosis written and directed by Fleming, which will be performed in July. Fleming, who often chooses “big ideas” such as celebrity or technology for his shows, said this year’s play will explore the experience of youth today who have more fluid identities, thanks in part to the Internet.

The theme of change might also speak to the organization itself. Fleming said he hopes to step down from executive director to focus more on writing and directing. But he is confident that the show will go on, and that all the hard work has been worth it.

“That’s why I think YSKP will survive, because it is always being regenerated,” Fleming said. “I think it’s great that kids can grow up here and have so much theater in their lives.”