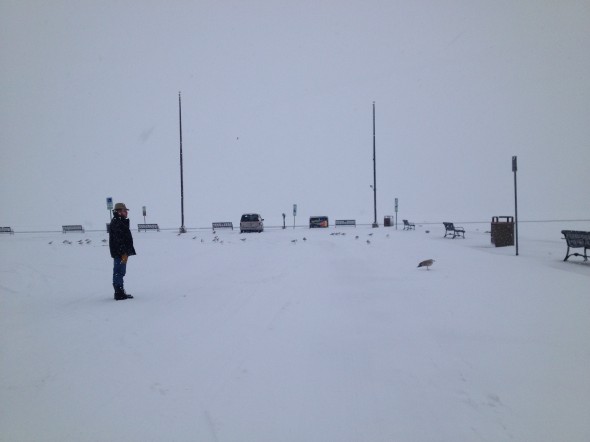 My husband Anthony staring out at the nothingness of Lake Erie in the snow.

I’m from Florida. So people do this thing around this time of year, whenever it gets coldest, and I start reacting to the cold like a normal human being. They all say some variation of the same thing: “Oh, you’re a Florida girl. You’re just not used to the cold, are you?” They think that’s really hilarious.

There’s something about a region’s particular brand of extreme weather — being prepared for it, being able to soldier through it — that breeds pride in those who’ve encountered it year after year after grueling year. Frankly, my first winter here, you could have spotted me as a newbie from a mile away. I was the fool who tried to walk to work over icy sidewalks wearing slick-soled cowboy boots. One of my co-workers, taking pity on me, bought me a pair of cleats to prevent me falling down and making a continued idiot of myself. This is a true story.

But the cold over the past few days has, I think, been extreme enough to level the playing field just a bit. Wind chills of -39 degrees are enough to stop anybody making amused comments about my migration from a semi-tropical climate, though perhaps this is only because people’s mouths are hidden behind scarves or their teeth are chattering involuntarily. We’re all freezing. So I feel like I can say this now, and not be judged too harshly, since I’m probably not the only one: this is, no joke, the coldest I have ever been in my life. Even having lived in south Florida for a while, where the flat vista and the lack of shade trees means immediate, sweltering heat when you emerge from the air conditioning, I have never experienced air temperature so extreme that I am instantly in pain as soon as I walk out the door.

I find it fascinating.

Last month, on a severely uninformed whim, I decided to take my husband Anthony up to Sandusky and ride the ferry over Lake Erie to Kelleys Island. The plan was to visit the island’s glacial grooves, one more stop in our family’s infinitely nerdy quest to visit every site in our Ohio Historical Society Passport. It was a surprise birthday trip for Anthony, so I went ahead and booked a room in nearby Milan. Of course, if I had informed Anthony, a lifelong Ohioan, of my plan, he might have been able to tell me it’s not a good idea to try to take a ferry boat in the dead of winter. Ergo, when we arrived at Lake Erie, this is what it looked like: 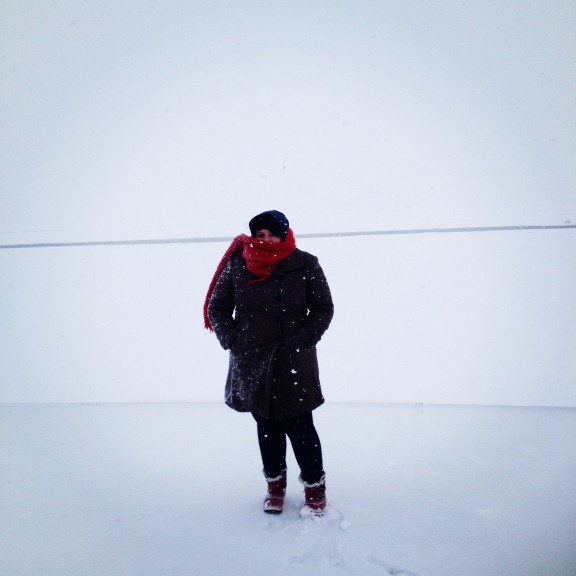 Swallowed up by the nothing.

No, there obviously were no dang ferries. The glacial grooves might have been appropriately glacial, but we were not seeing them that day.

But when life gives you snow, make a snow cone, right? We spent a good while standing out on the docks, staring out at the vast, apparently endless whiteness of the great lake. It was stupidly cold that day and snowing rather hard, and nobody with any sense was out on the roads, so it was also exceedingly quiet. It looked and sounded like the end of the world.

It brought to mind a trip to the beach down near my home. My part of Florida is touted to have the “World’s Most Beautiful Beaches,” because of the fine, white “sugar” sand. Tourists flock there in droves during spring and summer, and the strip is littered with hotels, condos, restaurants and bars. But there’s another beach, so far down the strip and out of the way that tourists don’t tend to make it there. It’s frequented by locals, but not enough for the kind of development that’s typical on the more popular beaches; at least, it was when I lived there. This meant that in some spots, at night, there was little light, and scant noise, and if you stood on the shore and stared out in front of you, all you would see was unending blackness. It felt, again, like the end of the world.

I was, for most of my life, a Florida gal. But the longer I stay here, the closer I get to becoming an Ohio gal, too. There are drawbacks to this kind of dual citizenship (i.e., the condescension of your townie pals), but there are benefits, too: I’ve had the privilege to stand twice at the end of the world, and from the present comfort of my warm living room, I am able to sit here and marvel at how both instances were so disparate, but so much the same.

So bearing this in mind, I will do my best to enjoy this winter, stinging nose and all. And I will accept this week’s abnormally cold temperatures for what I assume they are: karmic justice for everybody who makes fun of me for being from down south. For that matter, I assume comeuppance approaches soon for those who playfully mock the occasional twang in my accent. You know who you are. You’re on notice.