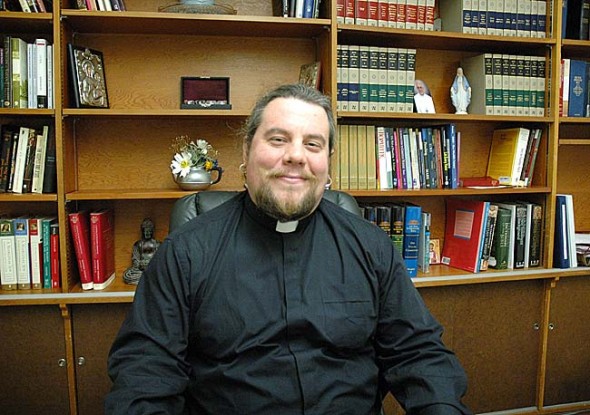 Local Bible scholar and theologian the Rev. Aaron Saari was recently hired as the new part-time pastor of the First Presbyterian Church. Saari, who grew up in the village, hopes to attract new people to the church by emphasizing the church’s inclusivity and social justice commitment. (Photo by Megan Bachman)

Take a closer look at the new pastor at the First Presbyterian Church and you’ll see that the man wearing the clerical collar also wears earrings, long hair, tattoos and combat boots and preaches about “radical love” and progressive Christianity. In his sermons he quotes U2 followed by St. Augustine, Leonard Cohen followed by Plato.

Not your typical minister, the Rev. Aaron Saari now leads the local church already known for its social justice commitment towards even more inclusivity and service. Preaching in his hometown, the theologian and educator also hopes to spark philosophical conversations among local skeptics and appeal to those disillusioned by organized religion.

“There are so many people who have been beaten down by the Bible and the idea of coming to church is so abhorrent to them and I get that,” Saari said this week. “The way we can address that is by flinging our doors open and saying you are welcome and you are affirmed for who you are. It’s an open table of radical love … and it’s based on the idea of love and that God is always expanding, not contracting.”

Saari, a biblical scholar, recognizes that his views may be different from other pastors, but believes that he is following the message of Jesus in the scriptures. He is pro-choice, pro same-sex marriage, will perform same-sex marriages and baptize the children of same-sex unions, and will “do so unapologetically,” he said.

“Jesus went to the very people who were ostracized and said, ‘You are beloved,’ and we, the Church as a whole, have done a terrible job instead focusing on abortion and homosexual marriage — social, culture war wedge issues — while Jesus tells us to talk less and do more,” he said. “Instead, how can we as a community be of service to you, listen to you, pray with you?”

In his first head ministerial position, Saari, 37, was hired as the new part-time pastor late last year and has been preaching there for the last month. He takes over after Rev. Derrick Weston left last summer to work with inner city youth in Pittsburgh. In a sermon on Christmas Eve, Saari discussed how the holy family itself wasn’t a traditional family, while in general he aims to deliver sermons that “inspire, challenge, uplift, and don’t go on too long,” he said. Services are at 10:30 a.m. on Sundays and are open to all.

Saari, who moved to Yellow Springs at age 10, had a circuitous route to Christianity. His father, Jon Saari, who worked at Antioch College and was one of the founding faculty members of Antioch McGregor, was an atheist, while his mother was agnostic (both still live in town). Saari majored in religion as an undergraduate at Kalamazoo College as an act of rebellion and started a theology master’s degree program at Xavier University in order to be a “great atheist thinker — the next Richard Dawkins,” Saari said. When he found out that his brother, Stephen, committed suicide, Saari experienced deep emotional pain followed by gnosis that he described as “an overwhelming sense of presence” and knew that his brother was at peace and that Saari was not alone. He began to believe in God.

Saari went on to publish a book, The Many Deaths of Judas Iscariot, on the historical figure and the issue of suicide, with an alternate interpretation on suicide, viewed by some Christians as a sin that condemns one to hell. He received a masters of arts in both theology and English from Xavier and a masters of divinity from United Theological Seminary in Dayton. Saari has been a visiting professor at Xavier and adjunct instructor at Antioch University Midwest teaching courses in writing, Christianity and non-western religions.

While he is a biblical scholar, Saari said he “takes the Bible too seriously to take it literally,” understanding that it uses mythopoetic language and other literary types. He said he remains a skeptic and doesn’t “pretend to have all the answers” even while he is a professing Christian with a firm dedication to the Gospel of Jesus Christ. And though Saari is a Christian pastor, “that doesn’t mean I can’t sit down with my Buddhist, Muslim, Jewish and atheist brothers and sisters,” he said. In fact, Saari hopes to lead discussion groups at the church on other great spiritual texts like the Koran and the Bhagavad Gita while his office is decorated with Buddhist statues, iconography of the Virgin Mary and a photo of Pope Francis, a particular role model for Saari.

“I want to be part of a Christian movement that says we are not afraid of other religions — we are not afraid of being self reflective and critical,” Saari said of his open approach. Saari also hopes to give talks on progressive Christianity to Antioch students, organize film screenings of “Jesus Christ Superstar” and other movies and start regular philosophical discussions at Yellow Springs Brewery.

In addition to his part-time pastoral duties at the First Presbyterian Church, Saari will continue to teach at Xavier while he begins a new doctoral program in preaching and works on his next book on the Gospel of Mark. Saari, who also participates in community theater, lives in the village with his wife, Miriam Eckenrode.

Saari said that the church’s parishioners have been “friendly and warm” to him, and he is grateful to be leading such a enthusiastic congregation.

“I’m really amazed at how dedicated the people of this church are, not only to the church, but to the community as a whole,” Saari said. “I always knew this building as being the center of town, but I didn’t really know much about the congregation but the history here is deep and is strong, the relationships are really powerful.”

Still, the church has its share of challenges. A dwindling and aging membership, typical of many churches today, needs to be reversed. As a younger person who has an “all are welcome” approach, Saari believes he could attract those who have been put off by organized religion, which has “done too much to divide,” he said.

“I’m not in the business of trying to get x number of people to church on Sunday,” Saari said. “I’m working with the incredible people of the church to get the word out about who we are and how we follow God, and I hope it will resonate with people … As the scripture says, ‘They will know us by their works.’”

The First Presbyterian Church has also recently had difficulty holding a pastor. Before Rev. Weston, who was here for 18 months, Joe Hinds served for less than one year, and for the three years previous the church relied on a fill-in pastor for its Sunday services. Saari hopes to stay for the long haul.

“I would love to spend the whole of my ministerial career here, and not only because I live two blocks away,” he said. “I do feel that God placed me here. I want to serve. I’m not looking at this church as a stepping-stone.”