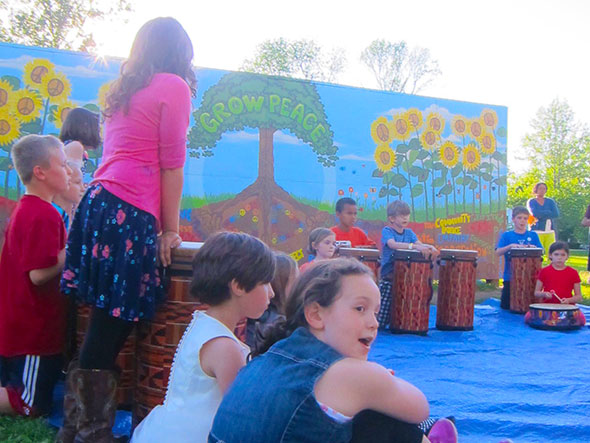 Thursday and Friday, Yellow Springs Schools hosted exhibitions of their year-end projects. The high schoolers had their day on Thursday, the middle schoolers’ projects were featured on both days, and Mills Lawn School hosted exhibits on Friday. The events were a chance for the students to reflect on their achievements, to convey what they had discovered, and to test their comfort and understanding with their results.

Friday morning at 10am, I answered a special invitation given to helpers on the First Graders’ Beautiful Spaces project. I had helped out midpoint in the project…after weeds had been pulled but before the new plants were set in place. I was curious as to how the landscaping turned out. I was also a little apprehensive for the childrens’ sake. Wednesday night had delivered torrential rains to the area. Flash floods spilled into roads, lawns, and basements forcefully redecorating as churning water pressed from high land to low. Evanescent but mighty creeks conducted several village gardens—newly sown on Mother’s Day—to heaven knows where.

Fortunately, the childrens’ handiwork had been spared from the storm’s most damaging effects. Nestled in the lee of the school’s easterly wall, the garden had not taken a direct hit. Only a couple of plants had tipped over in spots where mulch had washed away. By the end of Thursday-morning recess, all was put to right and no evidence of trouble remained when I arrived on Friday. 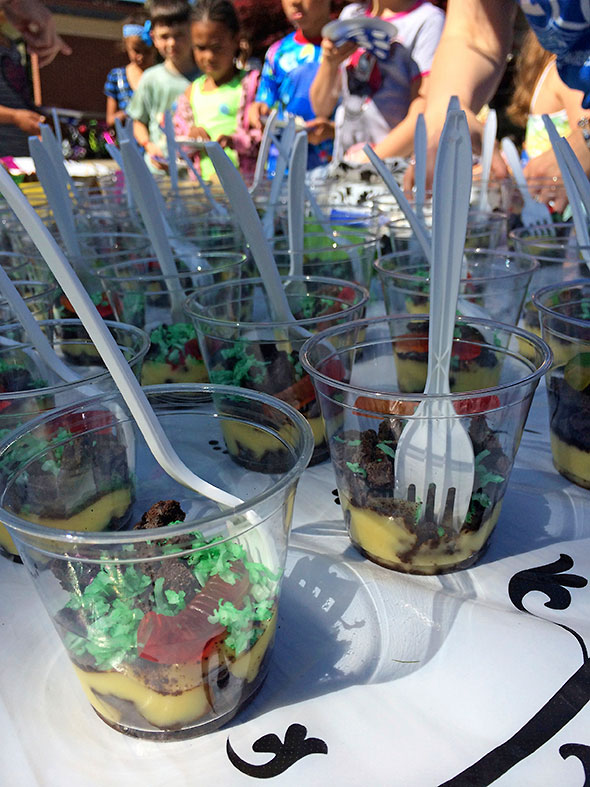 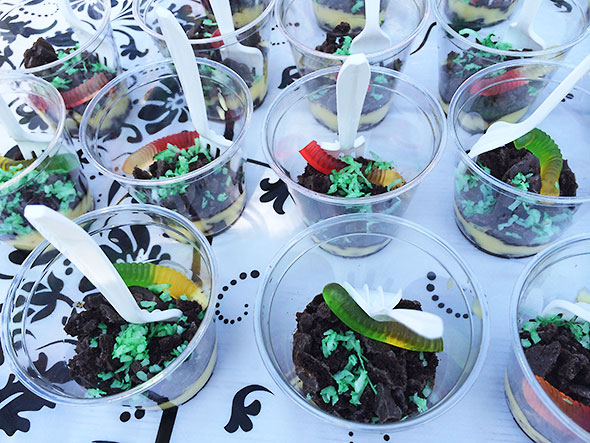 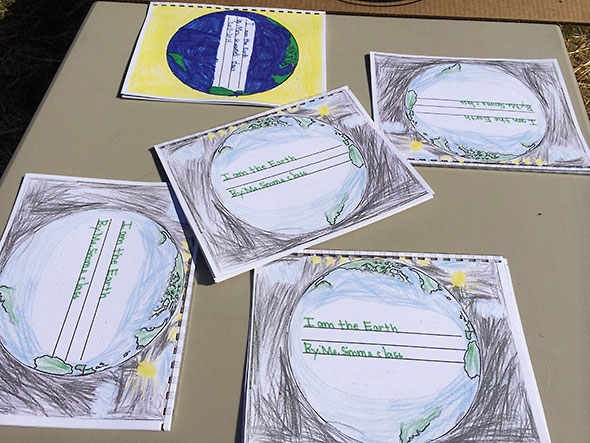 Led by Ms Simms, the children greeted their visitors with the school song…”Mills Lawn is like a red-brick garden”…and then together we ate dirt. A concoction made of cookies and pudding and spun with gummy worms, our mid-morning treat was served in clear cups so we could appreciate its interesting, evocative layer of elements. 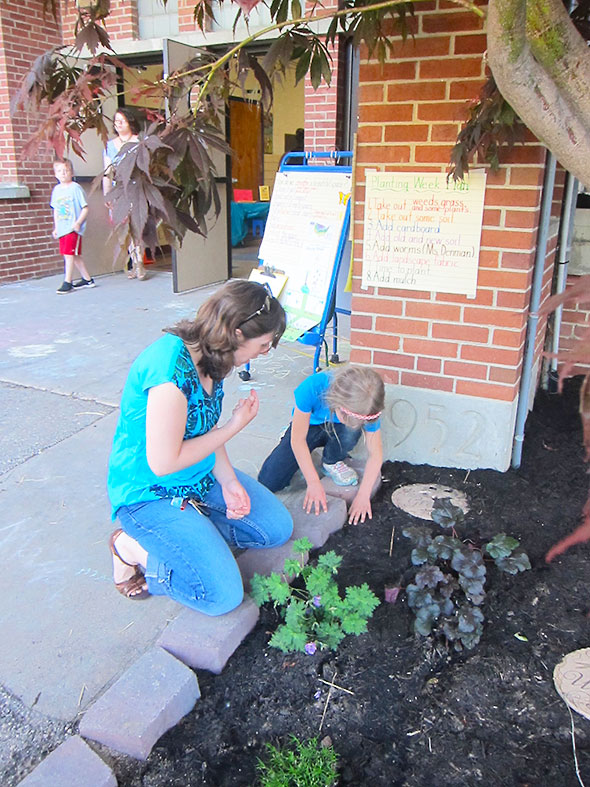 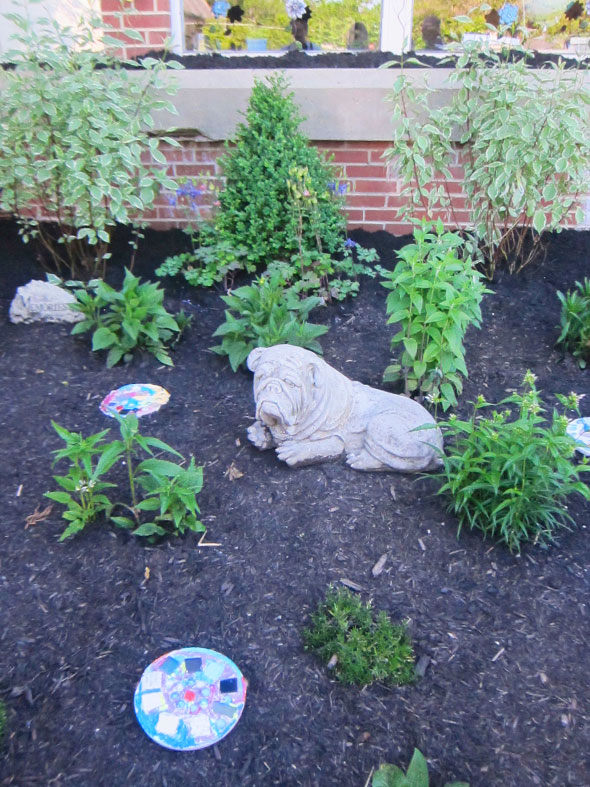 That afternoon and evening, the children received many more visitors and treated each to stories of the front garden’s evolution. The garden and its young attendants were charming and drew a steady stream of sightseers. In the maze of entwining tours, my daughter played the role of docent well. Confidently guiding her guests around the garden, she walked through how—step by step, layer by layer—the flowerbed was rebuilt. Taking advantage of the posted teaching materials and reading the many sentences with ease, my first grader described nagging problems that the design resolved. Weaving her own experience among the special points of interest, she pointed out the stone bulldog sitting boldly in the midst of the flowers and—surprise!—the twinkling glass ornaments peaking out from the dark-red foliage of the Japanese maple. She took her audience into confidence and revealed a few of the garden’s flaws but plainly stood as its unfading advocate.

I stood back myself and watched as my daughter elicited smiles, gasps, and intrigued questions. Clearly, she was in her element. This is not always so. My daughter struggles in school at times. Part day dreamer, part impatient with the demands of proficiency, her attention to task will falter. Here, project based learning serves her well. Offered an authentic opportunity to work with adult tools and to teach others, she stepped up her game and, without an inch of shrinking, aspired to mastery. 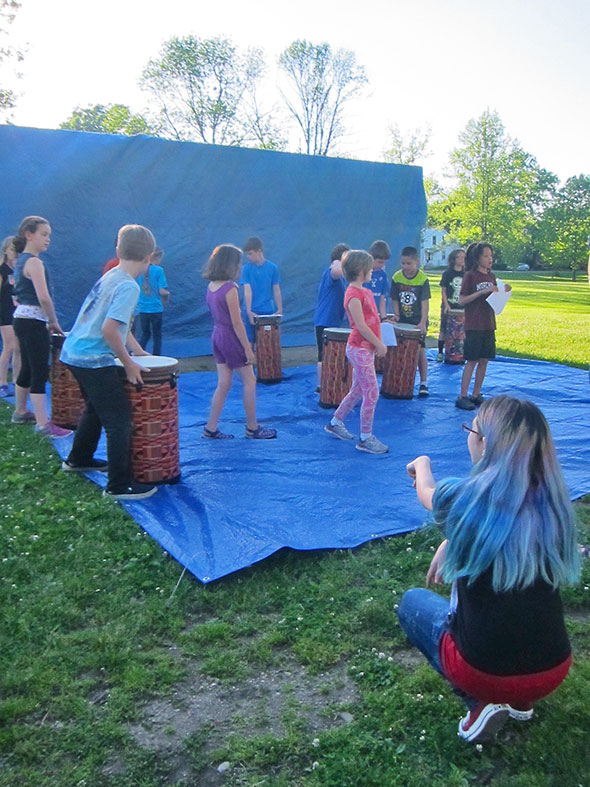 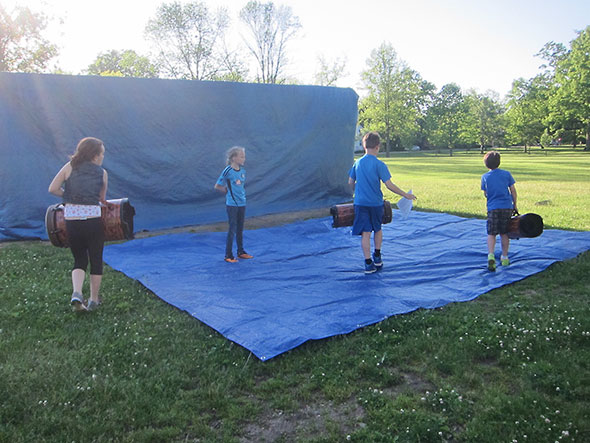 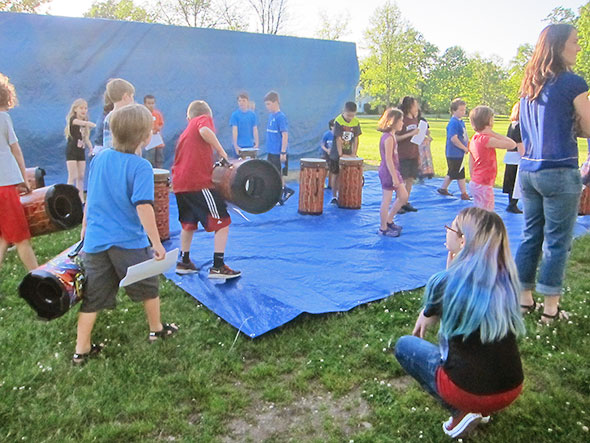 On the west lawn of the school, another drama unfolded Friday night as the hard work of the third and sixth grade students came to a thrilling climax. Since March, the sixth grade class has been developing a peace mural for the east-facing kickball wall. Friday was the mural’s unveiling. As the sun set behind a makeshift stage of bright blue tarp, the third grade class set up a colorful assortment of conga drums before the cloaked mural and waited with anticipation. 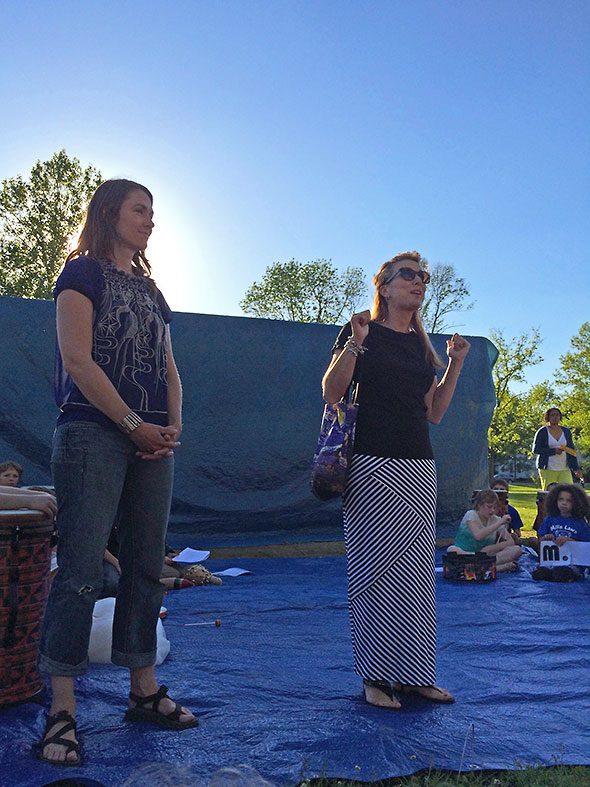 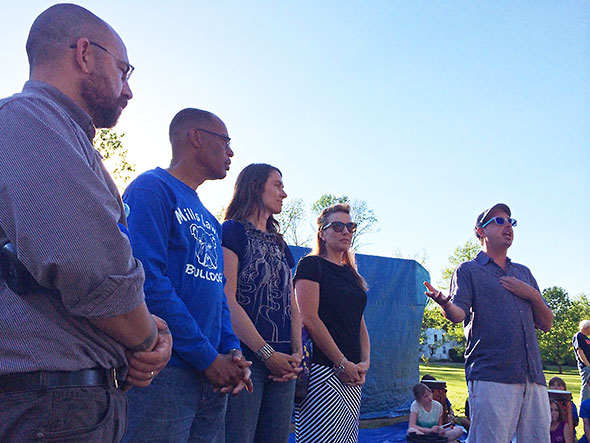 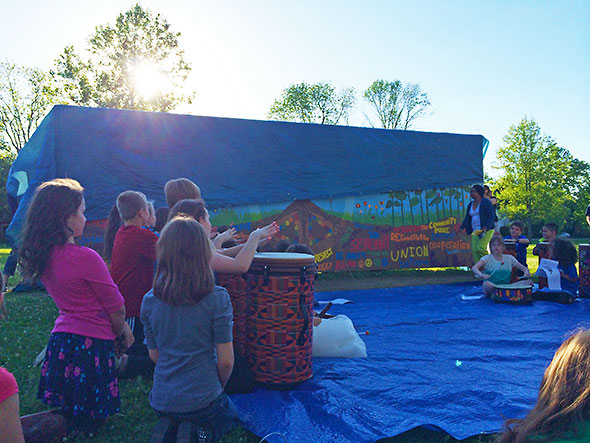 Mills Lawn Principal Matt Housh, Guidance Counselor John Gudgel, and Art Teacher Amy Minehart stood up with Visiting Artist Tricia Tallman. Artist Tallman mentored the sixth graders through the mural’s creation which included brainstorming themes based on colors, images, and themes that conveyed the roots and fruits of peace. When the time came for the reveal, a mighty drum roll sounded as the tarp veil was lifted over the kickball wall. Silhouetted by a rainbow-hued glory from the setting sun, the mural presented a tall, straight tree anchored in rich soil surrounded by a field of flourishing sunflowers. The tree’s canopy reads “Grow Peace”, and the ground from which it vaults is layered in the overarching themes and attributes of a peaceable people: tolerance, resolution, patience, honesty, fearlessness, reconciliation, gratitude, caring, diversity, harmony, and courage. 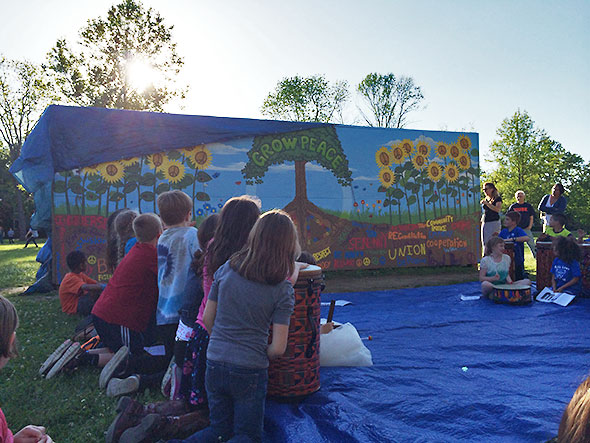 The celebration of the sixth graders’ graphical accomplishment echoed in the thundering beat and thoughtful pronouncements of the D.R.U.M. Code, a peace project developed and presented by the third grade classes and music teacher Jo Frannye Reichert. Reflecting the values needed to create and perform interesting, intricately orchestrated works, the third grade classmates banged out—in words and rhythm—the contributions of self-discipline, mutual respect, and unity to soulful music and to their interlocked lives.

As we enter into what would normally be the last week of school, I’m impressed by how well attended the exhibition night was. The school was packed! The level of engagement of the children and families was high, and the big smiles on their teacher’s faces attested to their satisfaction and even astonishment witnesses to the their students’ sustained enthusiasm in the typically waning days of school. In its fervent embrace of project based learning and Project Peace, the year at Mills Lawn School has built to rising crescendo.

In step with the well-fortified first-grade gardeners on the east lawn, the third and sixth graders have taken up the tools of mature souls. In art and music and the earth’s good soil, they are all picking up a common rhythm, a lyrical theme that can be felt deeply and personally. As our children learn to shape this world with the sweat-tested tools of informed activism, their mastery will build like the thundering drum music that carried that night across the lawn, through the school, and out into the community.