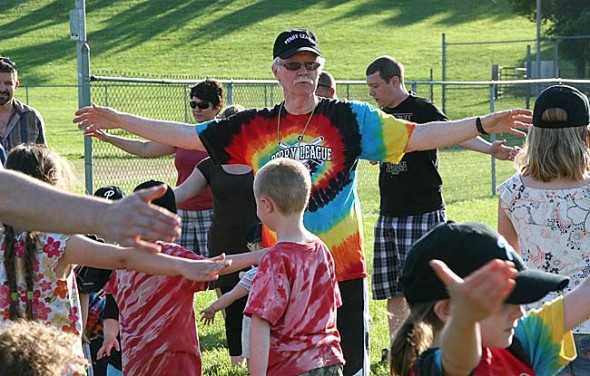 T-ball is full of kindness, surprises

We’re rolling our arms, warming up, but two of our animated, creative and delightful players, Rowan Brown, 5, and Kian Rainey, 5, are doing their own variation of this exercise. They are facing each other and flapping their arms up and down, their fingers in each other’s faces. No! No! No! Someone’s gonna get hurt. They pause at my alarm, but two seconds later they’re twirling, swinging their arms side to side, like yard arms on a whaling ship, smashing each other across their chests and backs. Swinging so hard you can hear the hollow thump-ump of the lungs. No! No!

On the diamond Matthew Drummand, 6, chases every ball hit off the tee, hustling after the balls thrown out by our volunteer dads, Scott Fleming, Nick Trimbach, Matthew Carson. Matthew scoops up at least one ball, but usually it’s two. “Good work,” I say, and he launches into a breathless tale of his non-stop high-energy pursuit of balls.
“Two!” he says. “I always have two. Sometimes three! Even four. Four! Four is all I can do.”

He is acting it out, being a mime with a handful of balls, and he is such a good mime, I can see all those balls clutched to his chest.

Halfway through the evening, Rowan Brown and Kian Rainey are in front of the pitcher’s mound, a small band of T-ball heroes around them: Alex Hamilton, 5, Brayden Trimbach, 5, and Bryce Fleming, 4. As this joyful, spirited gaggle of boys rushes every ball coming their way, I fear it’s a storm brewing, a boy-brawl about to erupt. Rowan and Kian scoop most of the balls, leaving the others high and dry. Surely a formula for heartbreak, tears and trouble. Then they surprise me. These five boys kick up so much dust and dirt they are almost hidden within the misty brown cloud they’ve created. And half hidden in this cloud, Rowan and Kian suddenly give their balls away, giving them to the other, until this instant, empty-handed boys. It is an act of generosity, of kindness. Two wonderful rambunctious wild and wooly five-year-old boys, two sunny funny warriors thinking of others.

Adelia Colon, 2, comes to the plate with her mom, Deborah, and her big sister, a T-ball veteran, Lilly Claire, 5. Adelia “has never hit a ball in her life,” Deborah says. With mom’s help, she hits a small, soft dribbling ball, but in her second time at bat she surprises. She steps right up to the tee and hits the ball on her first swing — and remember, this is a two-year-old as thin as a weed, barely two inches taller than the tee itself. Her loving, excited father, Karl, tells us his grandfather, Adelia’s great-grandfather, played Ponce de Leon (adult baseball, for people 30 or older, in Washington, D.C., and its suburbs). Karl has just taken Adelia’s picture and sent it to his dad, Adelia’s grandfather — who, Karl assures us, is celebrating, “At last!” sending that picture on to his father, Adelia’s great-grandfather, in heaven.

At the end of the evening, I let kids blow my whistle, something many of us love to do. Maddy “Peanut” McGuire blows it first and does a good job (it is surprisingly difficult to hold it properly between your lips and blow the air correctly). Maggie Bullock, 3, blows it, too, and while she does, Adelia Colon steps up to me. “Go ahead, tell him,” her mom says. “Go ahead,” her dad says. “Tell him.”

“I wanted to thank you for playing ball with us,” Adelia says, and then she does: “Thank you,” she says, her sentence crystal clear, each word articulated perfectly. I am deeply touched. An angelic 2-year-old child thanking me.

“It was her idea,” her parents tell me. And I am astounded, stunned, transfixed -— it is so emotionally powerful and penetrating, having such a small creature thanking you. It is like a pileated woodpecker thanking a bird lover for being thrilled by its raucous, distinctive, Woody Woodpecker call.

And that’s our pileated woodpecker Perry League, Yellow Springs’ T-ball program for girls and boys 2–9 years of age. We welcome all our community’s children regardless of race, color, creed, national origin, ability or disability, sexual or spiritual or religious orientation. We’ll be out there at Gaunt Park every Friday night for the next eight weeks (till our final trophy-potluck picnic night, Aug. 8), from 6:30–8 p.m. Won’t you join us? Partake of the love and joy that is we? Please do, please do.