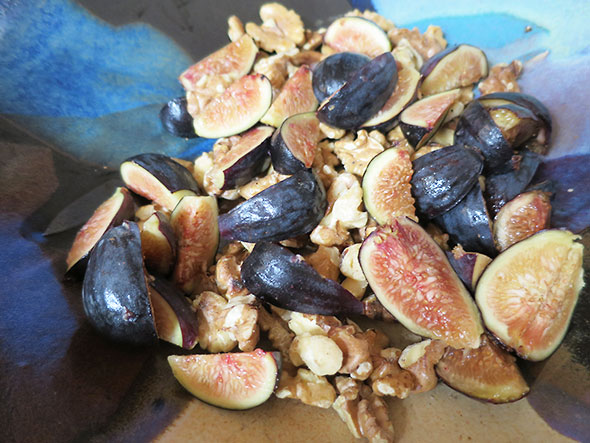 The few Saturday ago, I visited the farmer market booth of Rich Pearson and Tomasz Przepiorkowski. Set up next to the Corner Cone, their booth representing Partridge Pear Farm features heirloom varieties of tomatoes, potatoes, and squash. That day they had a special item: rooted cuttings from one of the farm’s fruit trees. 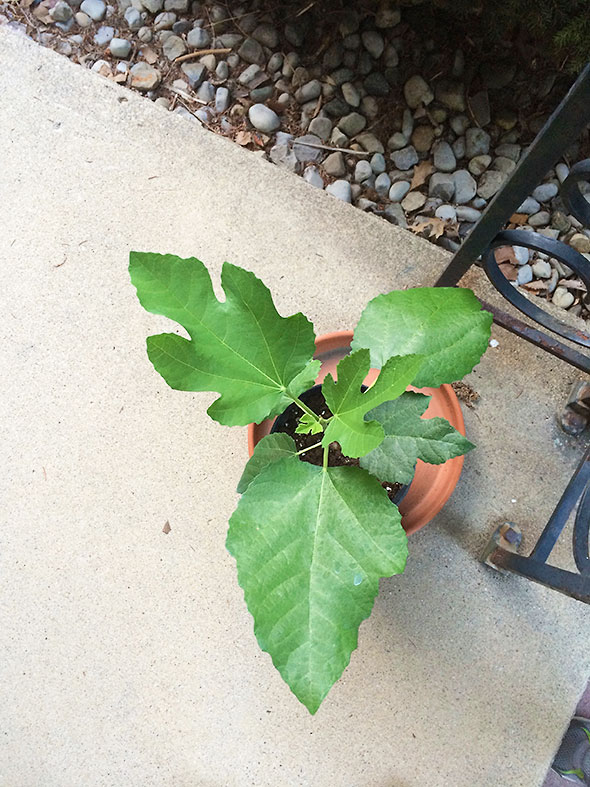 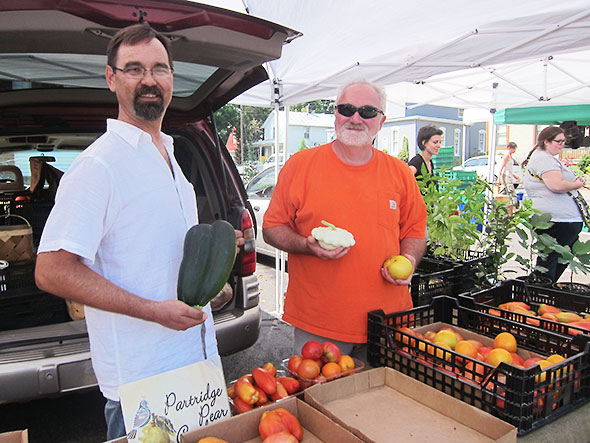 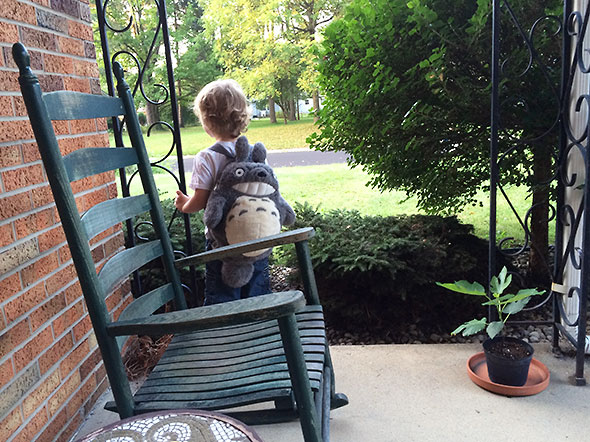 Rich and I were finishing a purchase of a half dozen orange tomatoes when I took notice of one of their little trees—its leaves lobed like a maple’s. I asked after it and Rich replied that it was a fig tree. Immediately, he had my full attention. I’ve wanted a fruit tree for many years and fig tree in particular ever since discovering that several New York City neighborhoods have productive fig trees. If they can grow in New York City, I figure surely figs can grow here. Now, suddenly, my dearly held wish was realized; Rich and Tomaze were supplying a variety that—with proper care—is compatible with our climate. Rich explained how they had taken cuttings from a potted tree on their farm and produced several saplings. He recommended keeping the sapling in a pot outside until the temperature started to drop towards freezing at night. Then, he recommended bringing the tree inside. The sapling will lose its leaves in the fall. It will leaf again in the spring as long as I keep the plant watered as the it winters indoors. After the last spring frost, we can bring the tree outside again to full sun. 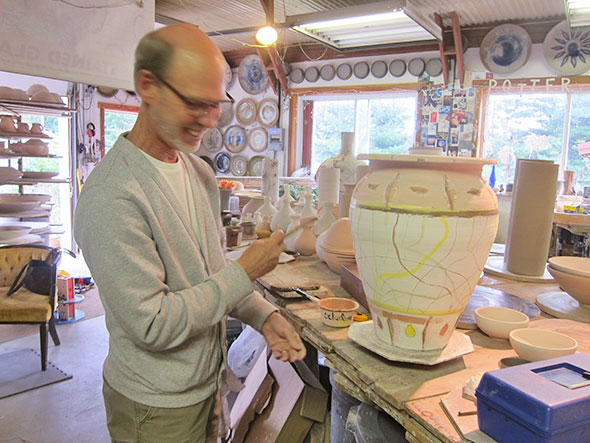 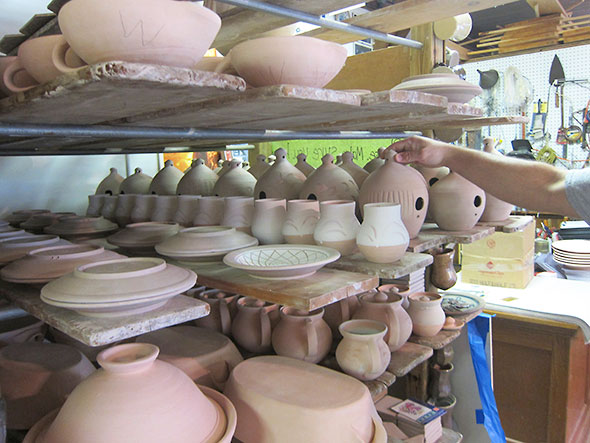 Happy to give fig tree husbandry a go, I bought the plant and brought it home to roost on my front porch. It has been keeping my son and I company as we wait for the bus. After a week, I decided to improve its conditions by providing it a steady companion and a proper pot. At the next Saturday market, I purchased a second sapling from Rich and Tomasz then made my way to Miami Valley Pottery. 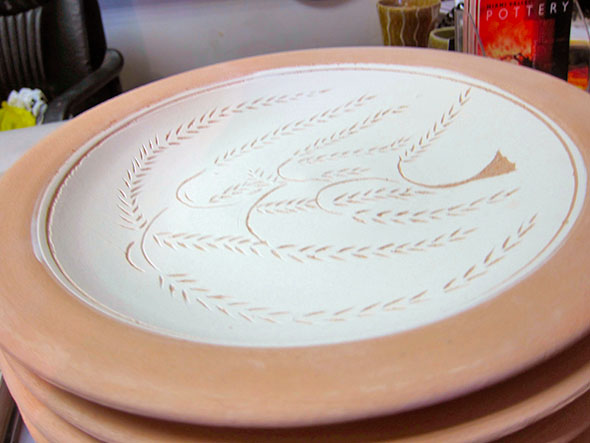 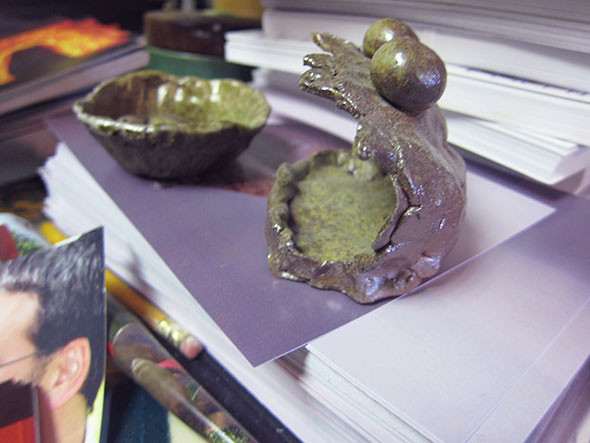 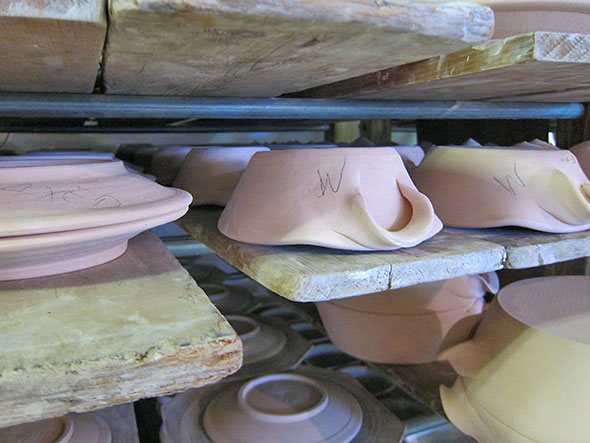 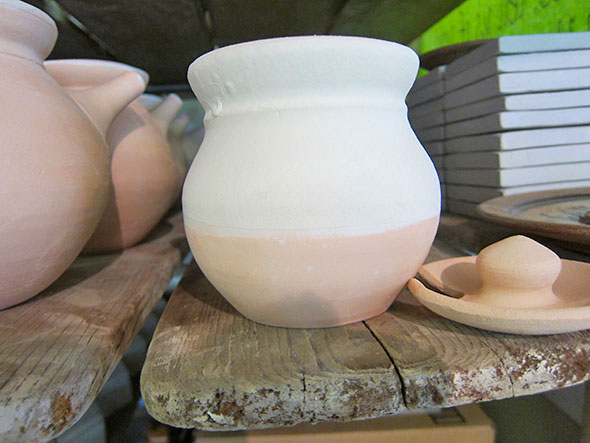 Naysan McIlhargey makes beautiful functional pottery that he fires in a huge wood burning kiln. I’ve brought home pie plates, a bundt cake ceramic mold, and several plant pots from the pottery on 145 East Hyde Road just south of the village. The ceramics have a life wrought from the flying ash and roaring heat of the kiln. Like children, the pieces are initially molded by their parents’ intent, but nature quickly takes over. 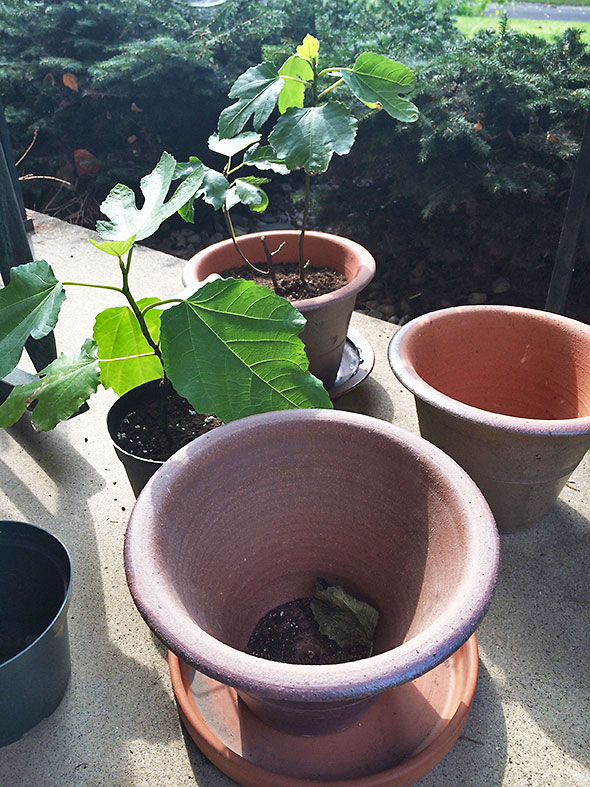 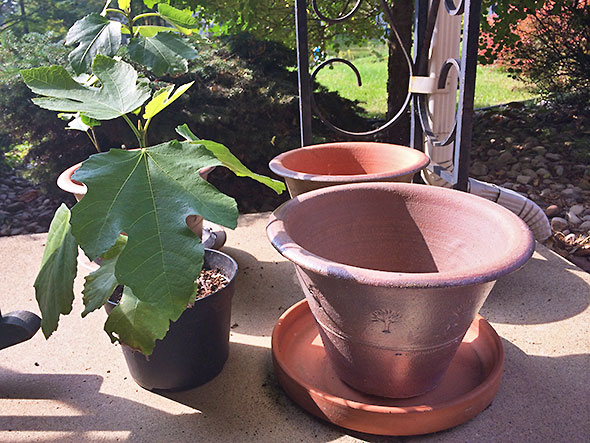 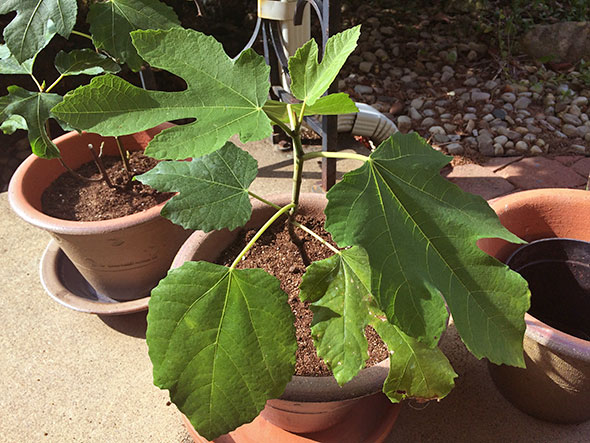 McIlhargey’s pots are about twice as big than the original plastic container giving the fig trees ample space to grow for a season or two. With a bag of potting soil, I added a small layer of fresh dirt then separated the plant from its original contain by pulling lightly on the plant where stem meets soil. The pot was also about twice as wide as the original plant so I added more soil around its sides. Having added new soil about the base and side of the planting, I was careful to avoid adding soil to the top. Trees don’t take kindly to having their trunks buried so I gave the fig tree that consideration. With both plants repotted, I gave pot each a water dish to sit in and a long drink of H2O. If I keep the plants properly watered and free of pests, I hope to see fruit in two years. 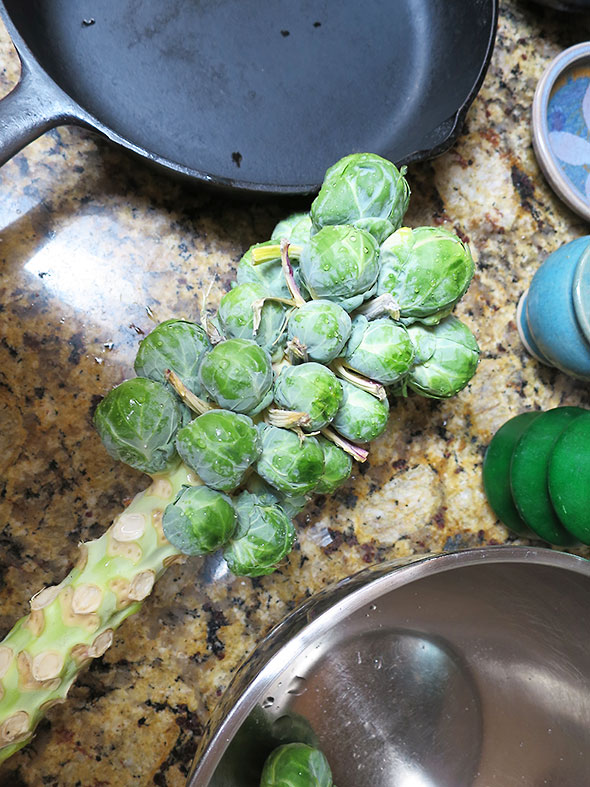 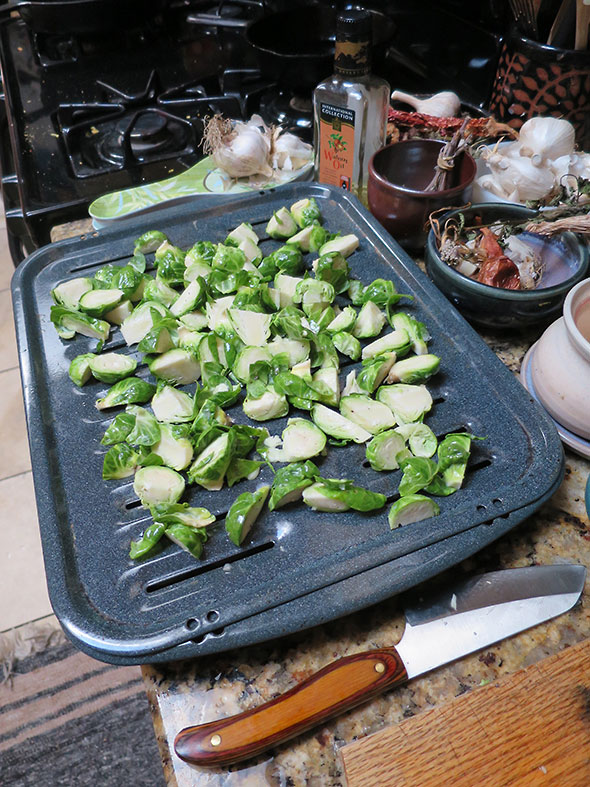 Though I must be patient in producing my own fruit, this week I tried out a recipe for brussels sprouts, mission figs, and walnuts. The walnut I bought from Starflower. I picked up the mission figs and brussels sprouts in Tom’s Market. I selected the brussels sprouts with the minimum packaging: several dozen buds still attached to the 18-inch stalk from which they sprouted. 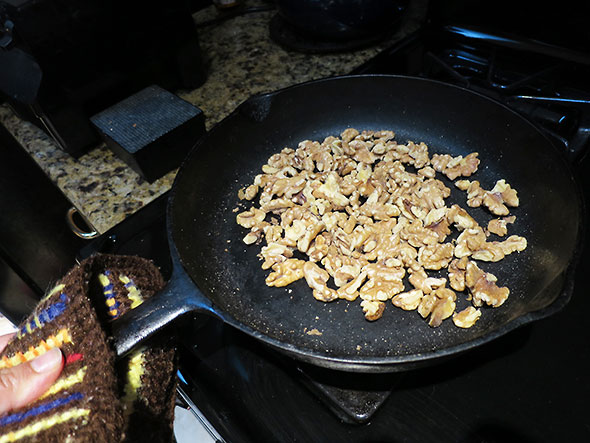 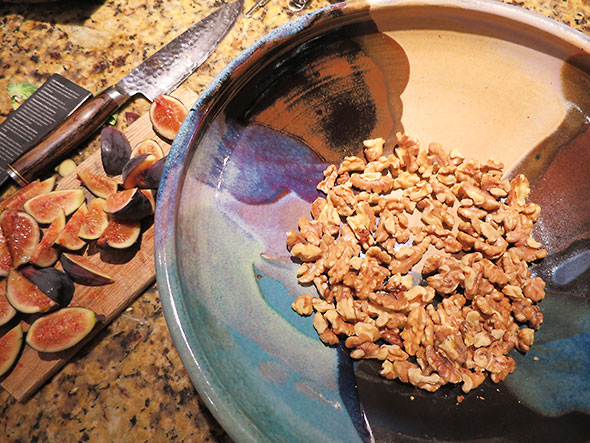 After plucking a third of the buds from their broomstick-sized stalk, I rough cut about 15 brussels sprouts then doused them in walnut oil. I added minced garlic clove and salt and pepper to taste. Spreading out the vegetables on a broiler pan, I placed them close to the broiler flame in the oven for 10-15 minutes. While the sprouts caramelized in the oven, I toasted a cup of walnuts on the stove top in a large skillet and quartered 5 to 6 firm mission figs on a cutting board. I poured the toasted walnuts into a large bowl, added the sliced figs, and finally pulled the lightly charred brussels sprouts from the oven and tossed them with the other two ingredients. 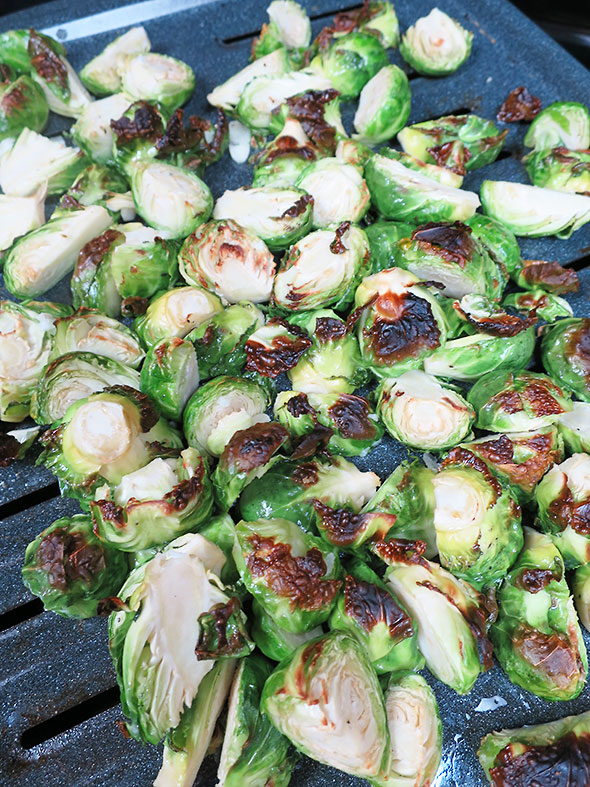 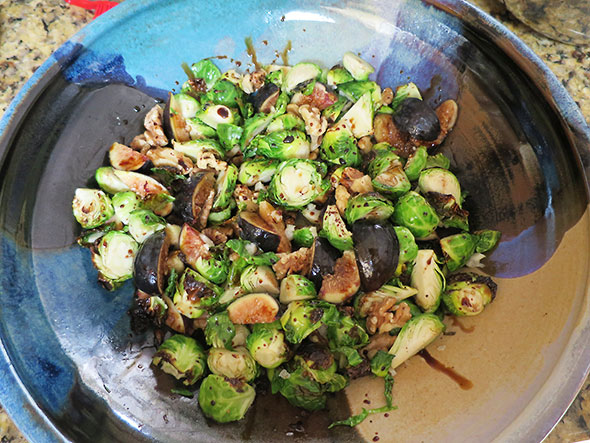 I dressed the medley of vegetable, fruit, and nut with a generous drizzle of balsamic vinegar. The single stalk of brussels sprouts provided more than enough vegetable for three versions of this dish. The final version I added a handful of white anchovies from the Winds’s Wine Cellar to the top of the salad—one part garnish, one part salty condiment—and had the warm salad medley for breakfast. 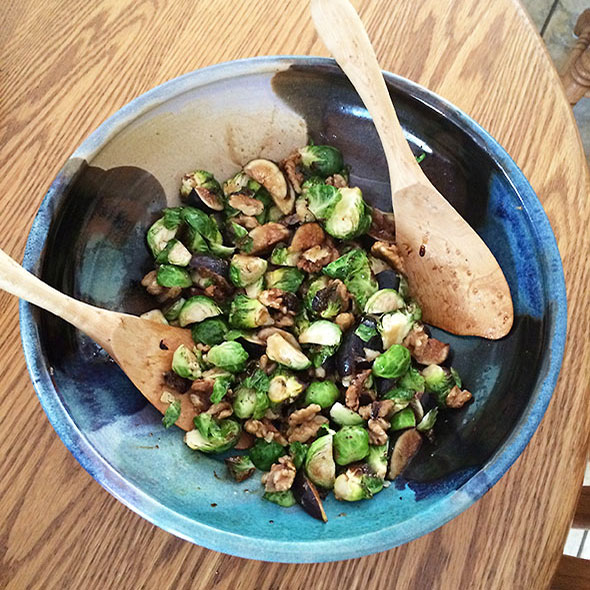 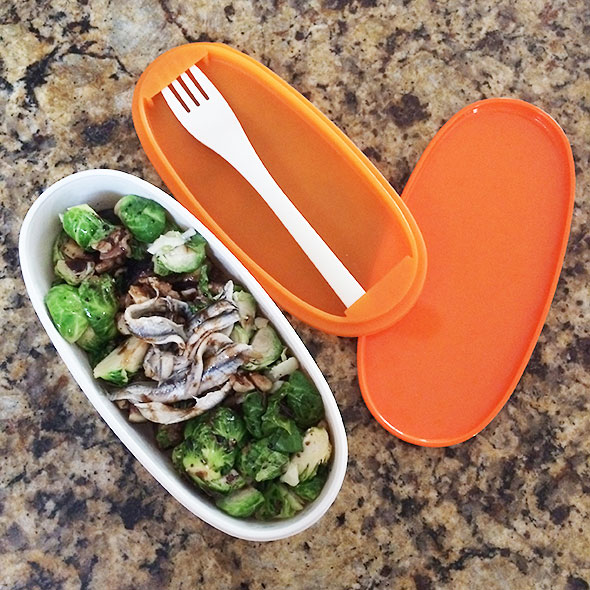 The figs make this dish giving it color, a wonderful floral aroma and fruity taste, and a chewy texture that compliments the crispiness of the cabbage-like sprouts. Fig have always seemed wildly exotic…a rich purple skin cloaking a cream colored center jeweled with cinnamon-red seeds. How lovely to discover that this plant grows well in our climate even within arms length on our front porch.