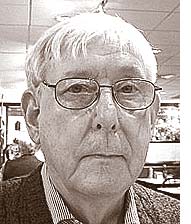 Born Sept. 24, 1934, in Gentryville, Ind., to the late Dorothy Eberhardt Davidson and Harvey Harrison Davidson, Donald graduated from Farmland High School and earned a Bachelor of Arts degree from Antioch College. Drafted into the Army, he served in Germany, a country he grew to love. He worked as an editor in the publishing trade for Viking Press, Dodd Mead, Grosset and Dunlap and other firms. A fierce liberal, he canvassed door-to-door for political causes in the 1980s for such groups such as CISPES and USOCA, to heighten awareness of U.S. activities in Central America. During the 1980s, he taught technical writing and English as a second language. He was a tremendous advocate for Antioch College, providing support to reestablish the institution.

Donald was fascinated with history, opera and the etymology of languages. From time to time he communicated with columnists regarding language usage, never passing up an opportunity to explain where they were incorrectly using a phrase or terminology. While profoundly deaf in later life, he spoke and understood a number of languages. In 2012, his fascination with the history of the Ohio River motivated him to charter a pontoon boat to explore for several days with three others, including his son Kevin.

Reading widely and deeply throughout his life, Donald examined topics until well versed in them. Quick to be modest (“I know a little bit about a lot of topics”), he was amazingly well-informed and enjoyed sharing his knowledge with others. Donald’s great love was his family and its genealogy. He was in the midst of writing a personal memoir and family history when cancer cruelly took his life.