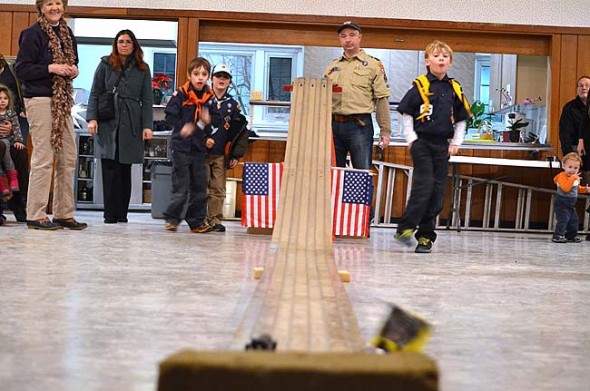 Throwing a Yellow Springs twist on proceedings, the organizers arranged two races. First was a no-holds-barred, no rules, build-what-you-want-as-long-as-it-rolls competition and second was a law-abiding made-to-official-Boy Scouts of America-specifications race.

Approximately 25 children competed for a glittering array of plastic trophies. Cars with named like Banana Thunder, the Flying Hot Dog and Pink Sparkles 4 took the track. Master of ceremonies Jon Horvath ran the competition at the Presbyterian Church. In the end, Javin Obringer’s steel plate assisted car won the cheat-as-much-as-you-like-bracket and Loren George was victorious in the law-abiding BSA-approved race.

” I want to thank everybody that helped make the evening a success,” said Cubmaster Chris Wyatt, who manned the racetrack, after the event. “We had a blast.”