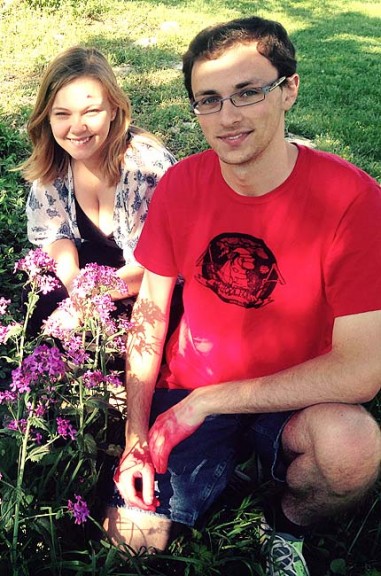 Mollye Malone and Dylan Boczar believe there are a lot of bright students in their Yellow Springs High School graduating class — some more deserving of the honorary titles valedictorian and salutatorian the two garnered this week, both said in an interview on Friday. That didn’t stop Malone from driving to her one high school goal of achieving the top spot in her class. And it didn’t stop Boczar from being naturally curious enough to seek out difficult courses and do well in them.

Still, when Malone learned of her achievement earlier this month, among her first emotions was regret.

“I thought, wow, why did I pursue this so hard?” she said. “I wish I was salutatorian — Dylan deserves this so much more.”

“No, she deserved it because she wanted it with all her being,” he said. “She works really hard and puts forth the effort to do the task.”

Malone didn’t start out believing in her academic capacity.

“I never felt like the smartest kid in the class because I knew kids like Dylan were way ahead of the curve,” she said of growing up in Yellow Springs. “But my dad always encouraged me, and my work ethic was just different.”

Malone also had what she called “big ideas,” and at some point in elementary school developed the temerity to try and make them happen. In sixth grade, for example, she thought it “would be cool to go back and be a kindergartener for a day again.” Her teachers supported her, and she and a group of peers were able to help the then-kindergarten students for a day.

“See? Mollye takes the initiative. Mollye’s cool like that.”

Boscar, on the other hand, grew up believing he was exactly the smartest kid in the class. Having moved several times from Connecticut to Virginia and then Wilmington, Ohio by the time he hit kindergarten, he moved through material so quickly he  had to be “held back” from taking on second grade as a 6-year-old.

“It was a conservative, fundamentalist school, and I was bored,” he said. “I got in trouble too — for things like trying to help other kids and stealing rocks.”

But Boczar found his place when his family moved to Yellow Springs and enrolled him in the Antioch School, where he was challenged to move at his own pace. And when he moved on to McKinney Middle School, he met other students who, to his surprise, matched his abilities.

“I always had a high opinion of my own math skills, and then I met a couple of friends here [at YSHS] and they blew me out of the water,” he said. “And I thought, these people are light years ahead of me in math and they’re actually interested in it.”

He eventually found an interest in psychology, has taken a handful of college courses in the field and plans to major in it at Oberlin College next year.

Malone is one of those math lovers, who plans to major in engineering at the University of Kentucky next year. While she never thought she was the best mathemetician, in high school she became fascinated with the book “The Way Things Work” and realized she tends to “think in a structural way.”

“I realized I was interested in math, physics and science,” she said, adding that her brother, an engineering major, was influential in pushing her to pursue science and “the cool jobs engineers get.”

Malone also credits the schools for pushing her as a leader in academic projects such as the high school restroom renovation.

“It’s so easy to make a change — you just go, here’s a big idea, let’s do it! Everyone who does a senior project does it,” she said.

Boczar attributes much of his interest in the humanities to McKinney language arts teacher Aurelia Blake, who pushed him to write and be generative when he would have preferred to simply read a novel.

“I can’t credit Aurelia Blake enough for pursuing me down the hall and encouraging me to live up to my potential,” he said.

And they both are hugely thankful to have grown up in Yellow Springs, where everyone is considered “special” and peers are supportive and loving toward each other — including the Class of 2015, whose 57 members are very close, Boczar and Malone agreed.

“Kids who go to bigger schools can’t shine,” Malone said. “The benefits of a small school are ridiculous — I’m close with all my teachers, and I’m so thankful to be here.”

“I still think it can all be attributed to our good looks.”