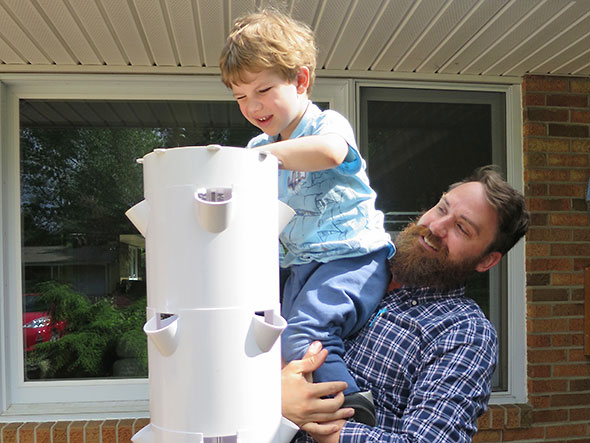 At a recent meeting of the Yellow Springs Resiliency Network, several village residents came together to talk about conservation. Of the items before us—renewable energy, local food production, economic resilience, low carbon transportation, zero waste and curtailing consumption, and efficient buildings—there appeared to me to be one conspicuous omission. Clean, Sustainable Water.

We are fortunate in the Miami Valley. We get an average of three to four inches of rain in the spring and summer months. All around us, green lush new growth vaults well-watered from fertile earth with hardly a thought to irrigation. While my Colorado-based sisters line their gardens with drip lines, I crowd my plants into the Ohio soil and, beyond thinning the plants as they mature, largely leave them to fend for themselves. The State of California illustrates, however, how much fortunes can change. From that state’s troubles, we see that we cannot take ready access for granted. From our own experiences close to home, we can’t take water quality for granted either. 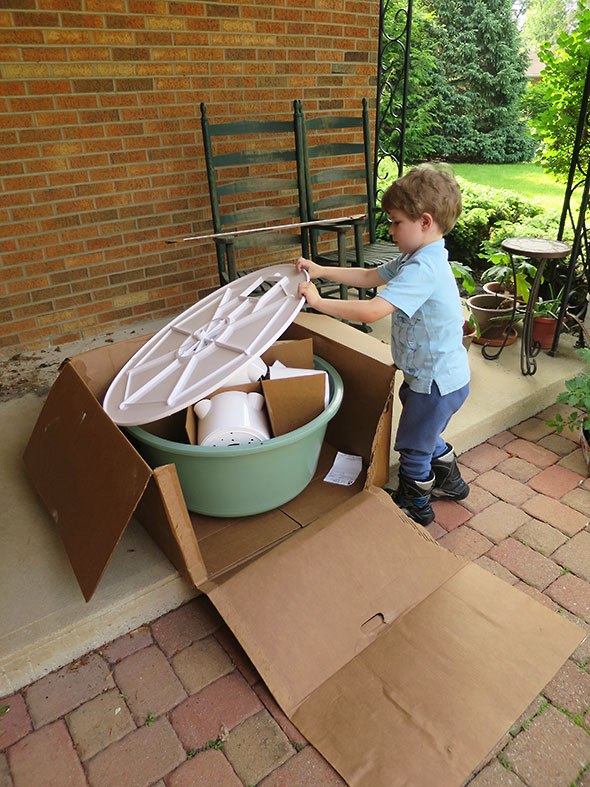 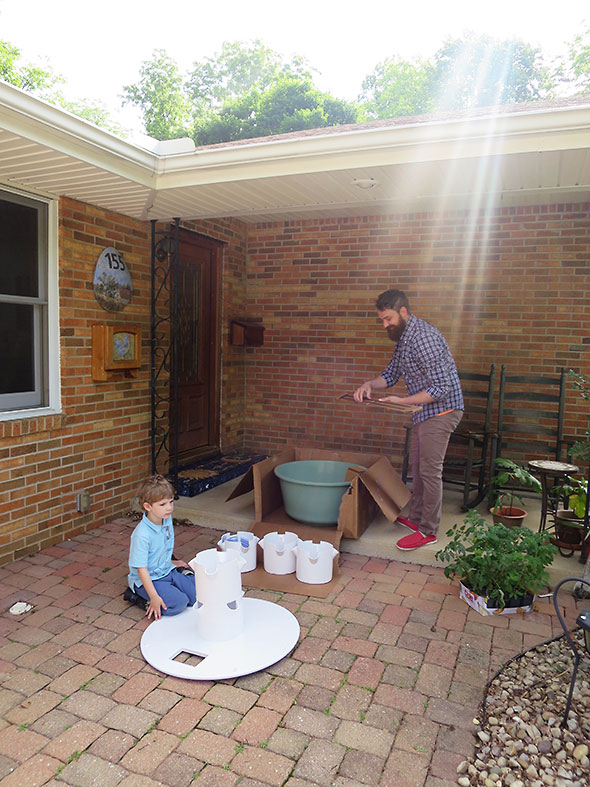 On my own property, I know I need to water if I’m going to get a decent cucumber or eggplant. Vegetables have a preference for rainwater over tap, so I have visions involving rigging up rain barrels to the downspouts and drip lines to the vegetable gardens. Spurred by these visions, I’ve ventured into a few stores that specialize in hydroponics while visiting other cities—Ithaca NY, Gunnison CO, and Athens OH—and wished for such a store close to home. 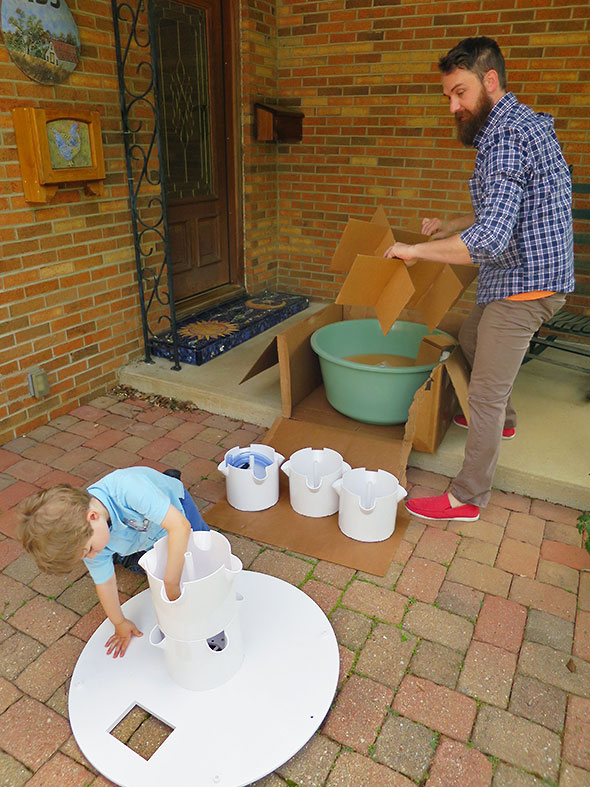 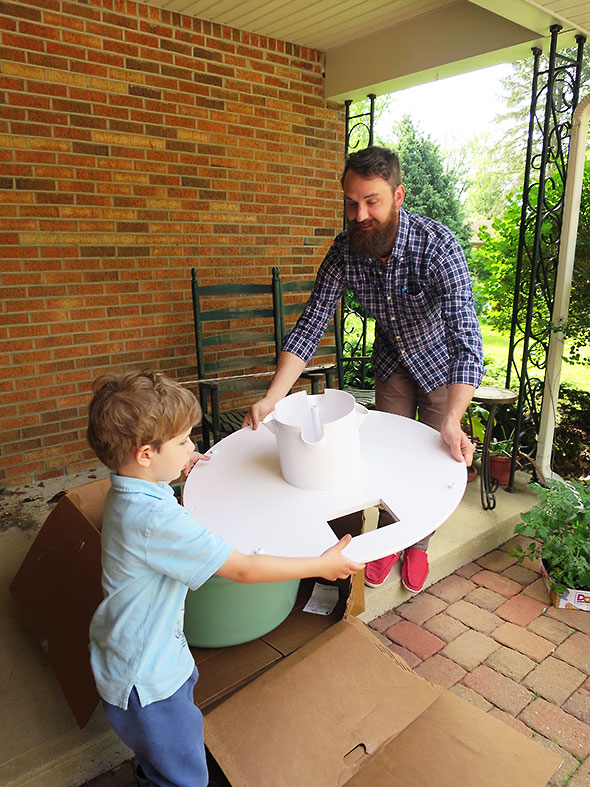 As a busy mom and neglectful gardener, I yearned for a prefab solution that would take a morning to set up and push go. This winter, such a solution presented itself here in town. While organizing the winter farmers market, the Baker family introduced me to Bradley Campbell. Campbell sells hydroponic tower gardens. His product is not typical farmer market fare–he didn’t offer the produce but instead the means to produce—but, considering the steady interest in greens for market, I offered him a vendor spot for the season. I had seen tower gardens before; I had once discovered an impressive array of monoliths—lit by grow lights and covered in edibles—in a terminal of the Chicago Airport. After deliberating on where I would put my own monolith, I made the investment in April: an extended tower complete with tomato cage. 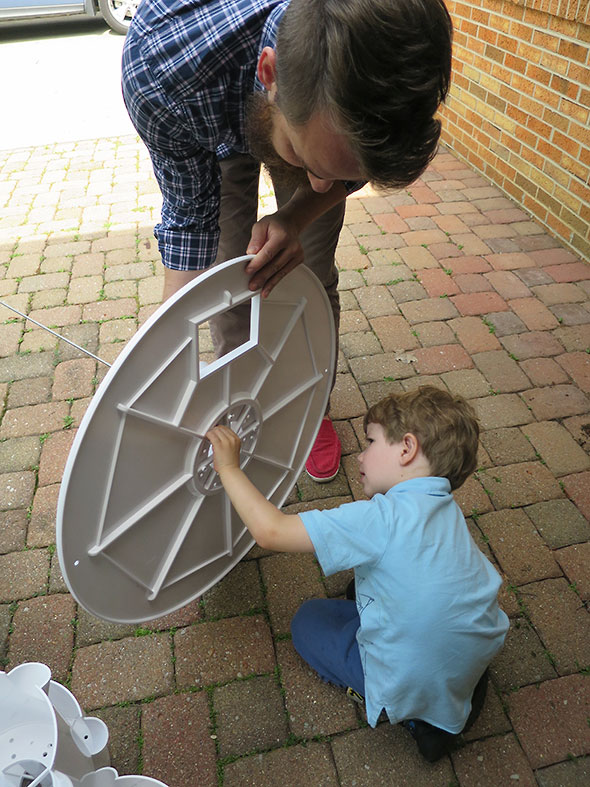 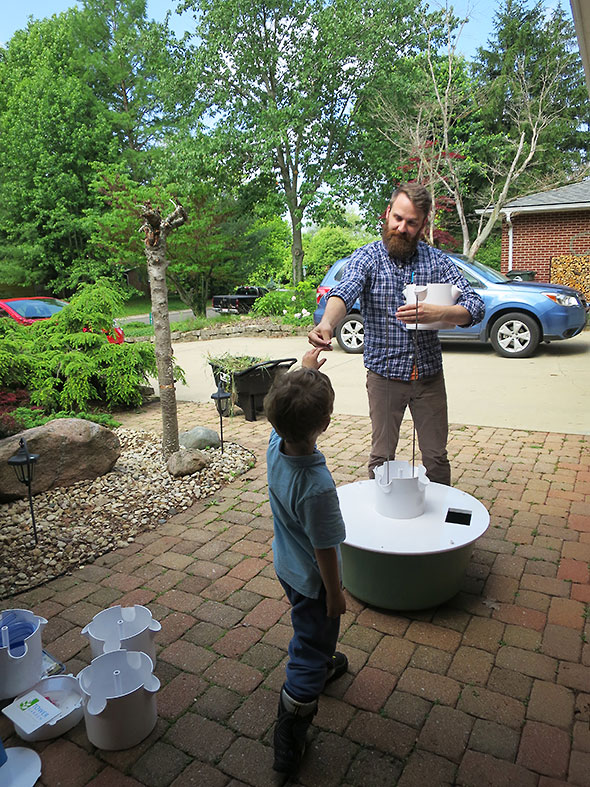 The boxes arrived promptly, but we waited until June to open the boxes. The occasion was my son’s fifth birthday, and nothing seemed more appropriate than to commence his day with a construction project. He needed no persuasion. I slit open the biggest box to reveal the water tub for the tower while he finished his breakfast. Intrigued, he unpacked the tower’s components concealed in the tub and with spot-on intuition began to reason out their assembly. 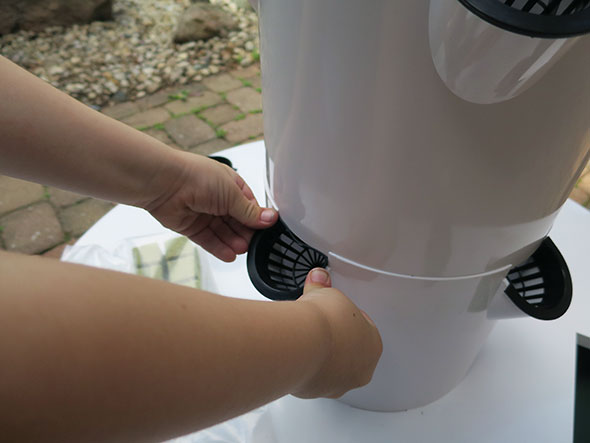 As I prepositioned other boxes of supplies on the front porch, Campbell joined us for the morning project. In no time, the two young men were working as a team—master and apprentice—as the tower gained height. Two metal rods connected the tower sections to the white cover of green water tub and, after setting the rods into position, the men took turns fastening washers and wing nuts. Once the tower stood tall, the three of us popped in the small black net pots—28 in all—where the plants will seat themselves. 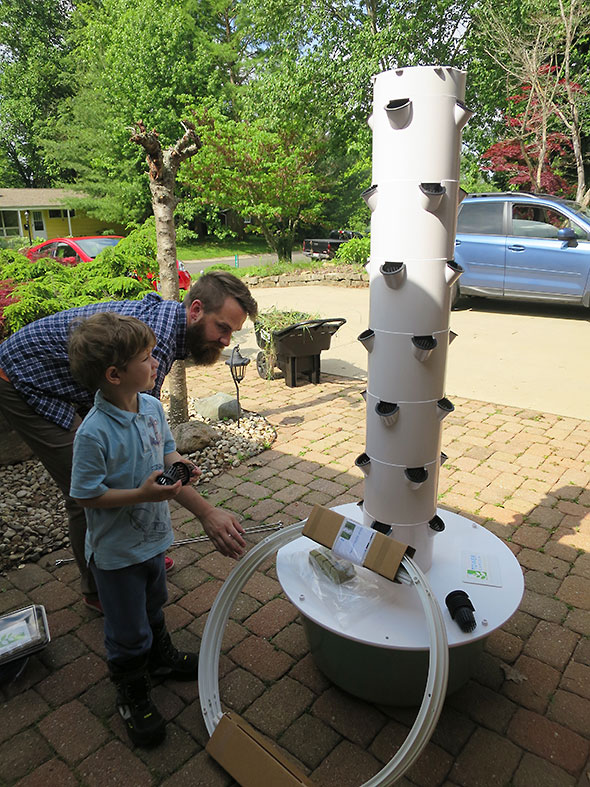 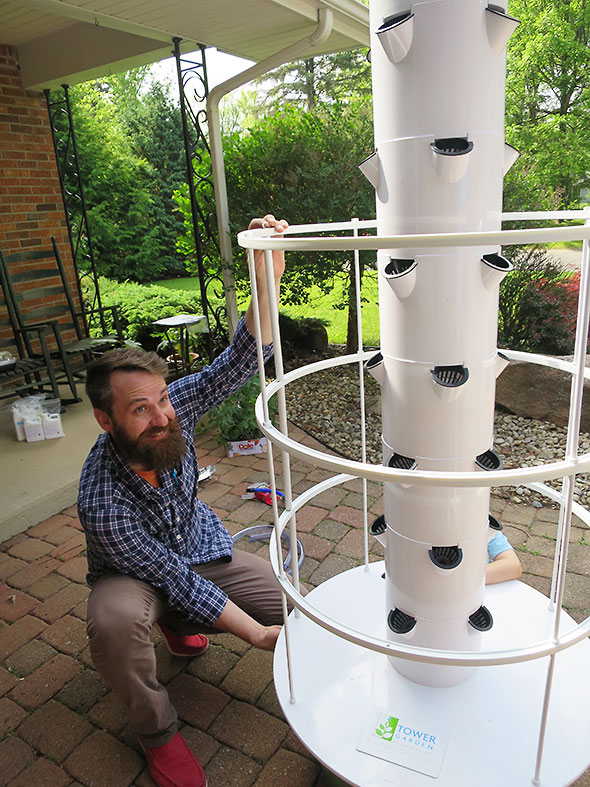 Campbell assembled the dolly that the tower will sit on then began to set the pins of the timer that manages the tower’s water pump. The timer has a 24-four hour clock with an array of 96 switches. Each switch represents 15 minutes so that four switches represent in an hour. Campbell set the timer so that the fountain would run for 15 minutes then switch off for 15 minutes. The timer is easy to program. I later flipped a few switches to the off position so that at night—when water is less likely to evaporate from the nested plants—the fountain flows less frequently. As summer intensifies, I have the option to flip those switches back on. 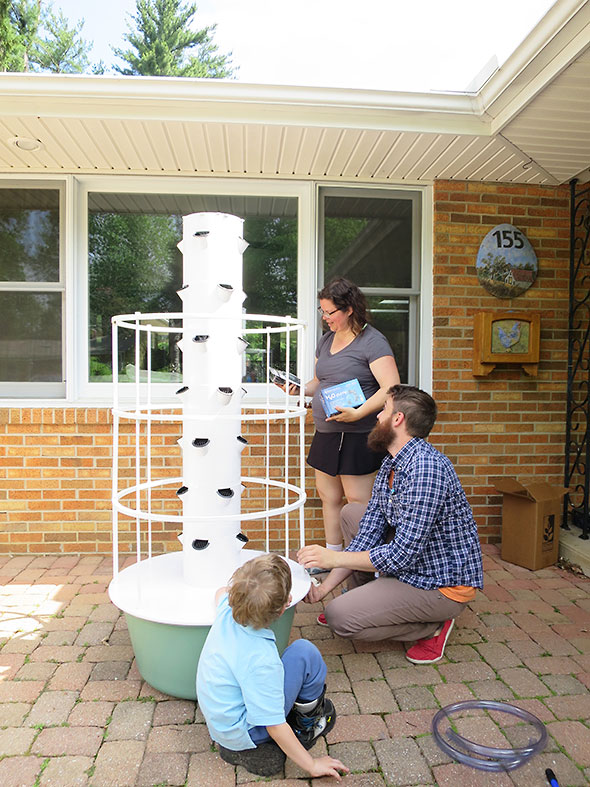 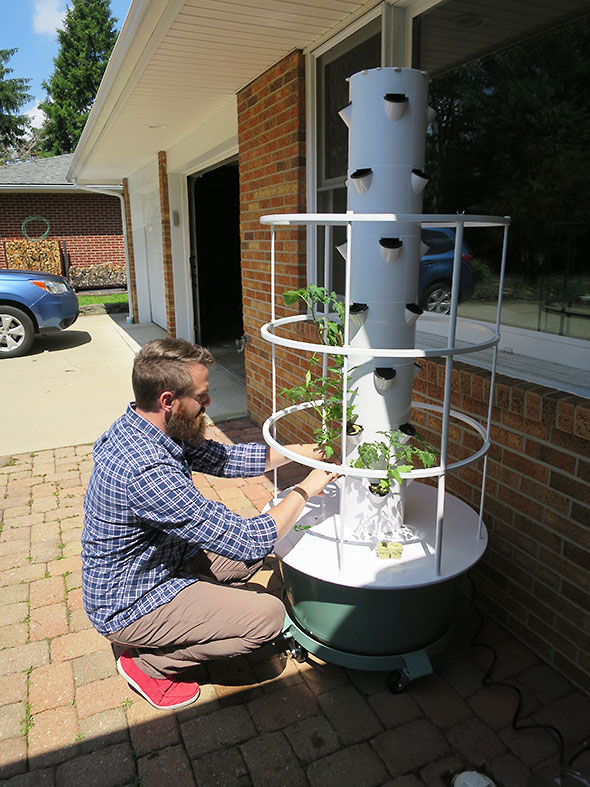 We positioned the pump and then filled the tub with twenty gallons of filtered water. With the fountain flowing, we began to insert plants. We cleaned off the soil of several vegetable starts—tomatoes, peppers, and herbs—then filled the net pots with the plants’ root systems. To secure a root system in a pot, we split fibrous cubes made of “rock wool” and fit the pieces around the bare root like shims.

In less than 90 minutes, we stood the tower up, inserted our plantings, and initiated their feeding. The tower comes with kits to feed the plant nutrients and to balance the pH of the water. I’m pretty pleased with our starter hydroponics project; it was easier to assemble than the average IKEA kit and, though the parts are lightweight, the final assembly is reassuringly stable. I like that the project meets several of my standards in terms of sustainability: Its vertical design conserves garden space, and its targeted watering system requires a fraction of the water and nutrients needed in traditional gardening and other hydroponic systems. Taste of the produce will be the final arbiter on this investment, but for now our tower represents a starting point from which to learn hydroponics and to engage my children in gardening. 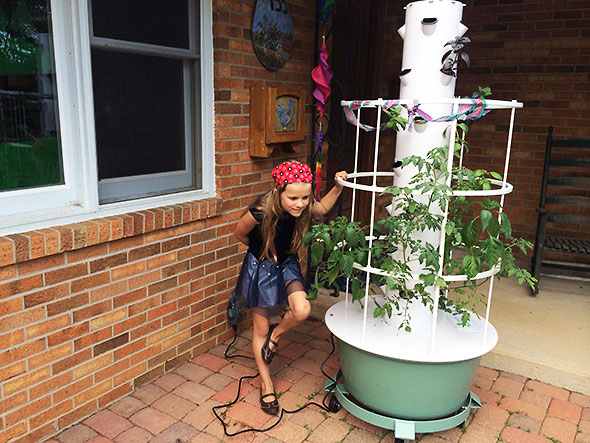 I must admit…as I filled up the tub with the filtered water, I did wish again for that rain barrel. Sounds like I know what my next water project will be.