Each year, the Yellow Springs News publishes the “Guide to Yellow Springs,” an insert that outlines the many community groups and organizations that have made their home in Yellow Springs. Each year’s Guide also includes a series of written pieces that discuss a central theme; last year’s Guide, “The Village at Work,” included stories from the News that focused on the village economy.

This year, the News decided to let somebody else do the work is turning the mic to the community with the 2015–16 Guide, “A Yellow Springs Diary.” Community members are invited to write about their life and experiences in the village and submit it to the News, with an accompanying photograph of the author that illustrates whatever they’ve chosen to write about. You can check out the submission form here, which gives a couple of guide questions to get you started on writing:

What brought you to Yellow Springs, and what keeps you here? What has been your favorite or most compelling experience in the village?

I thought I might give it a whirl myself, since my kind co-workers at the News have graciously given me this internet space and told me to keep myself busy make myself useful. As it happens, the first post I ever wrote as part of this semi-regular blog dealt extensively with how I got to the village, so I’ve got that part covered. As for what keeps me in Yellow Springs: well, all my stuff is here.

So I’ll dedicate this post to the second guide question, and discuss the one thing that makes Yellow Springs unique for me above all other things: my name.

When I started working at the News in October of 2009, I became the second “Lauren” in the office. In a working environment with more than eight or so employees, this might not be much of an issue, but ours is not such an environment. Immediately, my co-workers started bandying about the idea of a nickname. It started tentatively, in that sort of joking tone that friends might adopt when they’re not sure whether or not a new member of the fold has a sense of humor. They asked me if I had any suggestions, but as we all know, you can’t give yourself a nickname. If you could, we’d be a world full of “Chiefs” and “Aces” and “Supreme Love Gods,” and society would inevitably crumble. No, a nickname must spring forth unaided from the earth, and it lives or dies on whether it feels right on the tongues of those who use it and in the ears of she who answers to it.

In my case, my nickname came about like this: a former co-worker (and current friend) took the nickname discussion home to her landlord, a villager who, at the time, I had never met. This landlord (who I will not name, in case she doesn’t want to be associated with this nonsense, but she knows who she is — I think), apparently apropos of nothing, suggested the first name that popped into her head: “Chuck.”

My friend and co-worker brought this suggestion back to the office as a lark, and the seed was planted. Co-workers began to use the nickname, mostly joking, and the seedling sprouted. They began to use it more often, more boldly, and its leaves unfurled in the sun. I started to answer to it, and it flowered.

My mother and father named me “Lauren” with love and with purpose, and the majority of my identity has been built around this particular name. (I did go through a very brief period in middle school where I thought it would be hilarious to have my friends call me “Bob,” but this, like most middle school endeavors, fell quickly by the wayside.) I’m Lauren on all my documents, to all of my family members, in my home and in my own head.

But if you see me downtown and you yell “Chuck!” from across the street, I will absolutely answer to it without even thinking.

There seems to be a switch that gets flipped in my head when I walk out my door in the morning and head to work. The flipping of this switch means that, if you call me by my given name within 300 meters of the Yellow Springs News office, I will almost certainly assume you’re talking to somebody else, and I will ignore you. I’ll answer the phone this way: “Yellow Springs News, this is Chuck!”, and if you respond by asking, “Uh, who?” I will double down: “This is Chuck. Yes, Chuck.” In the past, I answered the phone by giving my first and last name, but in many cases, folks either didn’t hear my surname or just stopped listening after “Lauren” and assumed they were talking to our fabulous reporter, associate editor and woman-about-town, Lauren Heaton, and began telling me intimate stories about their lives. While this was informative, and always interesting, I did feel it was unethical to let it continue. After about a year or so.

It’s been nearly six years, so I’ve almost stopped explaining the nickname to people. I have a whole group of friends who calls me “Chuck.” I even wrote it onto my business cards so folks wouldn’t be confused. “Chuck” is who I am here, and every day, hearing it is a reminder of how I fit into the cogs of this village. Every once in a while, my co-workers will come into my little office and say, a little sheepish: “Tell me the truth — do you hate that nickname?”

The best and most truthful answer is this one: if I ever leave Yellow Springs, I’ll be sorry to say goodbye to Chuck. 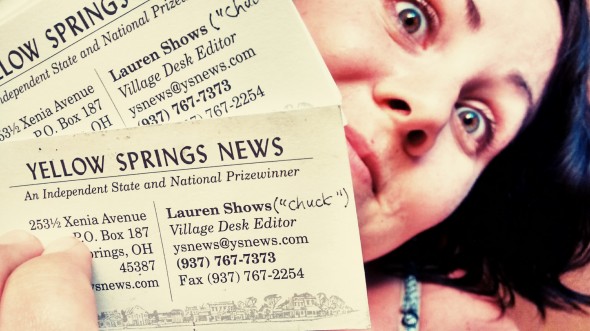 *Submissions to “A Yellow Springs Diary” are open through July 31. Send yours now!