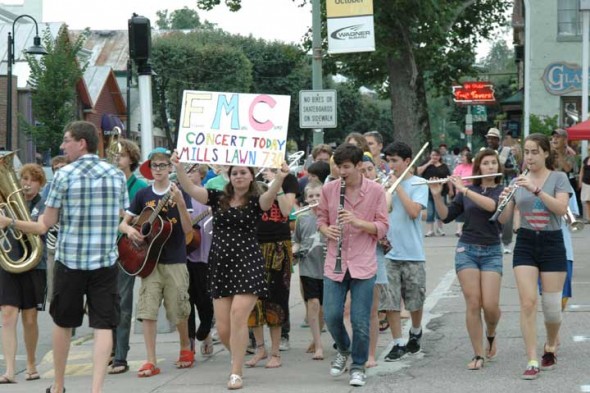 The Friends Music Camp will present its annual summer concert at 7:30 p.m. on Saturday, July 25, at Mills Lawn Elementary School. The concert is titled ‘Musicians for Justice and Peace’ and reflects the aim of co-founder and co-director Peg Champney to “make music meaningful.”

“This is the eleventh year the camp has benefited Glen Helen,” said Champney, who is the bookkeeper at the Yellow Springs News. “The camp values community, so it’s great to use music to help somebody else.”

The program will include performances by the camp’s concert band, staff and student ensembles, and the all-camper chorus. The concert will feature selections from across the musical spectrum. This year’s concert boasts four student soloists, including Yellow Springs’ Sean McDonald, who will play an original piece he wrote for the bass trombone.

“I knew there were going to be recitals, so I wanted to write something to perform in one of them,” said McDonald, 12. “The piece I’m performing in the concert is based on the minor pentatonic scale. It’s kind of bluesy and uplifting.”

This year participants are coming from at least 14 states and Costa Rica. The camp is held on the campus of the Olney Friends School, a Quaker-affiliated school in Barnesville, Ohio. The camp was co- founded in 1980 by Champney and Jean Putnam, and counts among its participants 10 musicians and three members of the staff from Yellow Springs.

According to its website, FMC aims to “encourage musical growth in a non-competitive environment” during its two- and four-week programs. The atmosphere is one of inclusion, “steeped in the belief that each camper makes a valuable and unique contribution to the strong community” created each summer. Students of all skill levels are welcome.

FMC offers lessons in piano, voice, guitar, and all band and orchestra instruments. Campers dedicate at least one hour a day to practicing and receive two personalized 40-minute lessons each week, in addition to rehearsing with a jazz ensemble or street band. Campers can also take classes that speak to their personal interests. In the past, the camp has offered classes in music theory and improvisation, as well as reading music and acting. Many of the staff are former campers themselves, and many campers have gone on to perform professionally.
“My personal favorite part of the camp is the original work-sharing that happens during the third week,” said McDonald, who is attending FMC for the second year. “You get to share a piece you wrote. I haven’t decided which pieces I’ll perform yet.”

The camp is also a summer camp of the classic variety. Campers and staff live in dorms and have ample free time to do crafts, play sports and explore the town. Evening programs include recitals, capture the flag and dancing. Campers also contribute to the sense of camaraderie as part of the dishwashing and clean-up crews.

The concert location at Mills Lawn shows that the campers’ reputation precedes themselves. The venue change was necessary to accommodate ever-increasing crowds. Last year the attendance was at capacity and some concertgoers had to be turned away.

A suggested $10 donation for adults and $5 for children under 12 will be taken at the door.

For more information, call Glen Helen at 769-1902. The firsthand experiences of campers and staff can be read at FMC’s blog, friendsmusiccamp.wordpress.com.