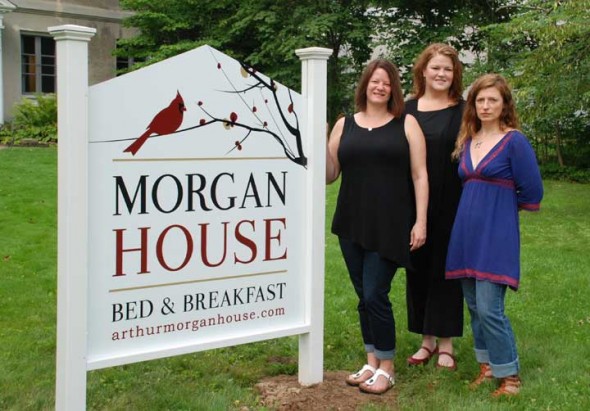 Stacey Wirrig, left, purchased the Arthur Morgan House Bed & Breakfast last year and is running it with host Wendy Pace, center, and head chef Erin Campbell. An open house at the B&B is Thursday, July 23, from 4 to 7 p.m. (Submitted photo)

Whether it’s enjoying a stack of molasses-kissed ginger-nectarine pancakes on the screened-in porch, taking in downtown views from a third-story room or appreciating the history of the century-old home built by one of the town’s most influential couples, the Arthur Morgan House Bed and Breakfast has a lot to offer its guests, according to the B&Bs new owner.

The task of preserving the historic home, open to overnight visitors for nearly 30 years, has passed to village resident Stacey Wirrig, who purchased the six-room B&B on Limestone Street late last year. In the words of Wirrig, the former residence of Arthur and Lucy Morgan is a “community treasure” and she’s confident it will continue to attract visitors, while she has relished the process of restoration.

“I see potential in places, with their beautiful histories,” Wirrig said. “I enjoy bringing them back up to their glory.”

To showcase the changes, the new host of the Arthur Morgan B&B is throwing a housewarming party Thursday, July 23, from 4 to 7 p.m. at the B&B, 120 West Limestone St. The event will feature complementary hors d’oeuvres, tours of the property and an art exhibit and sale of the paintings of the late Robert Whitmore, who taught at Antioch College from the 1920s to 1950s. The event is free and open to the community.

Wirrig purchased the Arthur Morgan House last November from Susanne Oldham, who owned and operated the B&B for the last decade. With experience in restoring old homes, interior decorating and tracking down unique modern and antique furnishings, Wirrig has since been busy overseeing a renovation she called “fresh and modern” and which has included new carpeting, painting, furniture and custom-built beds. Above all, Wirrig has focused on making changes that align with the home’s rich history.

While it was originally built as the private residence for the Morgans when they moved to town in 1921 after Arthur Morgan was hired as Antioch College’s president, the home has always served a larger constituency. During the Great Depression, Lucy created a food cooperative for Antioch students out of the home, according to a history document provided by Wirrig. Then, in 1934 the Morgans sold the home to Antioch, which used it as a co-op dorm, housing some 26 students. It was later used as administrative offices for Antioch before it was sold to Marianne Britton and turned into a bed and breakfast in 1986. Oldham purchased it in 2003 and reopened the B&B after a yearlong renovation.

Wirrig earned her chops restoring the old homes where she’s lived, including an 1860s house in South Charleston. She has enjoyed transforming the B&B with antiques she has collected over the years, along with more modern furnishings that fit with the style of the 1920s and 30s. She has long admired the home for it’s “great energy” and hopes to preserve its peaceful feel.

“Even before this was for sale, I used to think, ‘That’s a really beautiful house,’” Wirrig said. “I think houses have an energy to them and this house has a great energy — it’s calming and serene.”

A native of Lewisburg, Ohio in Preble County, Wirrig first came to the village to study at Antioch College, from which she graduated in 1998 before moving away and working in domestic violence shelters across the country. She returned to the village in 2006 with her husband, Steve, to raise their two children, Marin and Henry, now 10 and 12, and worked for a few years as Antioch’s Director of Alumni Relations after its reopening. While moving into the hospitality industry is a change, Wirrig feels the task fits with her passions for interior decorating and hosting parties. She additionally hopes to promote the space, which includes a large living room and screened-in porch, for business meetings, weddings and other events — all of which can be catered.

Even with the new 28-room Mills Park Hotel opening across the street, Wirrig said she believes there’s room for a local bed and breakfast here because of the “intimate connection” that only a B&B can provide. Wirrig also cited a 2005 local hospitality study, which concluded that the village could use an additional 30 to 50 rooms to meet the demand for overnight stays in town. Above all, Wirrig is confident the community will continue to attract visitors for overnight stays because of its kind and supportive people.

“It’s the people here,” Wirrig said of the town’s perennial draw. “It’s the fact that we’re committed to being a community, even though it’s not perfect. I grew up in a small town and not all small towns are committed like we are.”

Wirrig has found that visitors come to Yellow Springs to experience community, connect with locals and see what it’s like to walk everywhere.

“It’s like a day in the life of Yellow Springs, staying here,” Wirrig said. “It’s your chance to be a local for a weekend.”

Since taking over, occupancy rates at the Arthur Morgan House have been high, with all rooms booked most weekends, Wirrig said. There is more availability on weekdays and during the winter months, while rooms during holidays and special events, such as Street Fair and the Writer’s Workshop, are sometimes booked a year in advance. Weekend reservations typically need to be made about two to three months in advance, she said.

As a local business owner, Wirrig is gratified by the support she has received from other villagers. She is especially thankful to Oldham, who taught her the B&B basics; head chef, Erin Campbell, who created the mostly local and organic menu that changes seasonally; Wendy Pace, the B&B’s lead host, and the many villagers who helped during remodeling, including Bruce Parker, who custom-built the beds, Tia Acheson, who painted, Ann Gayek, who landscaped, and Richard Zopf, who shoveled the driveway.

“Owning a business here, I’ve learned that everyone supports everyone else,” Wirrig said.