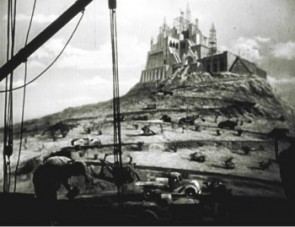 I took in a lot of drama this past week, as I saw two performances of a play and a movie within a few hours of each other. I was glad to be out and about and putting my mind to work, and I was flattered that a friend of mine offered my partner $20 to babysit so he could go see the movie with me.

I saw Yellow Springs Theater Company’s White Rabbit Red Rabbit and Citizen Kane, and I couldn’t help but compare the two, as tenuous as the connection I make may be. Anyway, what follows are brief reflections on the two – not quite reviews or scholarly dissections but just some thoughts I had while seeing them. Please get in touch to discuss any of this further as I’m interested to hear other attendees’ perspectives! 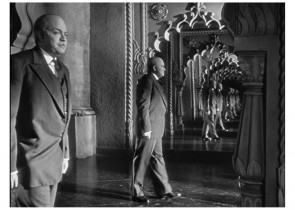 I’m not a film buff in any capacity but I’ve of course heard the honors bestowed on Citizen Kane. A lot of respectable people and institutions say it is the greatest film of all time, so I thought I would do myself a favor and see it this past weekend at the Little Art Theater. I expected I would be deeply moved by the experience and that I’d appear more sophisticated by doing so as well. The movie is a thinly-veiled biopic of William Randolf Hearst, and I figured I should see it for professional reasons too.

And Citizen Kane was great. I truly enjoyed it, but I feel I was too aware of its reputation to be fully blown away. I felt like I was waiting for each scene to prove to me the movie’s unparalleled greatness. Seeing it with this mindset didn’t allow me to didn’t experience the movie’s net emotional impact because I was too focused on the mechanics of the film.

However, I kept a running list of things I noticed because a lot of the movie surprised me. Here are a few observations:

Seeing Citizen Kane for the first time and on the big screen was well-worth doing. I look forward to seeing The Maltese Falcon there in November.

I gave myself another pat on the back for being such a patron of the arts after I saw Yellow Springs Theater Company’s White Rabbit Red Rabbit twice this past week. The production of the play is covered in more detail here, so I’ll just say that it’s a very unorthodox piece of drama. There is no set, no rehearsal, no costumes, and the actor is given the script the moment he or she walks on stage. The play blends the voice of the author, the actor, and the play’s character into an odd reflection on authority, as the actor is at the mercy of the script. Part of the point is seeing the actor’s relationship to the script and all its strange directives. 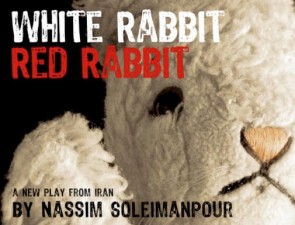 Where Citizen Kane offers an outside analysis of the lesson being explored – the illusory satisfaction of control – WRRR deliberately confuses who is pulling the strings and why. The audience is occasionally called to participate in the performance. It’s understandable when a audience member “volunteer” is made uneasy, especially when induced to do silly things in front of the audience. But the transfer is intriguing: the actor acts at the bequest of the writer, and now the audience member acts at the bequest of the actor. When the play discusses the author’s real life inability to leave his country, the concept of authority, as demonstrated in front of you by the interplay between actor and volunteer, seems especially heavy.

But audience members sense the joy of control as well. Full of emptiness or not, Charles Foster Kane inarguably gets satisfaction from getting things to go his way, and Nassim Soleimanpour, the author of WRRR, gets a thrill by controlling the entirety of the play’s production. Part of understanding the nature of authority is to let yourself get carried away by it, and there are overtones of this idea in the piece as well. 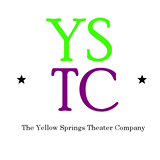 WRRR is occasionally funny, and the two actors I saw perform the piece, Lorrie Sparrow-Knapp and Ellen Ballerene, were definitely enjoying themselves. The unpredictable script employs fun riffs on the dramatic medium alongside sobering meditations on futility. The unconventional structure of WRRR and the occasional humor of Citizen Kane make a similar statement: pleasant trappings don’t change a fundamental truth, whether about a person or a state of being.

I feel that it’s critical to see the show twice. Because each performance is done by a new actor – the whole point is the performer’s first experience with the script – there are naturally different takes on it. It’s easy to see the parts that an actor enjoys most or finds awkward. Seeing two different approaches to the same role, especially when you have more familiarity with the script on your second viewing, adds another dimension to the ideas explored by the text. It was interesting to watch Sparrow-Knapp and Ballerene’s interpretations.

At the risk of sounding like an uncultured lout, I don’t really like animal parables so I definitely found the writer/actor/audience experimentation to be my favorite part of the show. I wanted to hear an actor’s take on the play after doing it, so was glad to have the chance to talk to Ballerene Jeanna GunderKline about their experiences doing the play.

“You get an email from Nassim 24 hours before you perform that says to prepare to act like an ostrich,” GunderKline laughed. “I was like, ‘what am I doing this for?’” The bewilderment continued on stage. “When I was on stage, I couldn’t prepare for anything because I didn’t know that the play would be serious coming up, so sometimes my emotions felt delayed about what I was reading.”

Ballerene I didn’t feel like I was inhabiting a character – it was more like I was reading a letter from somebody, she said, especially when the playwright started using cursewords. “I wouldn’t do that!” she said.

“I know! I had to say F-you to one of the sweetest people in town!” GunderKline said.

But overall, Ballerene came out unscathed. “I’d say it went faster than a lot of plays I’ve been in,” she said. “I didn’t know I was up there for a whole hour. It didn’t feel like an hour to me.” 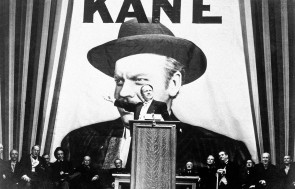 Iconic photo of Kane doing his performance of WRRR

I asked them if they were ever embarrassed or self-conscious.

“I didn’t care!” Ballerine said. “I felt embarrassed for some of the people that were coming on stage!”

Like the actors, attendees will feel confused but moved, enlightened but perplexed. It’s a weird show for sure, and the sparse stage and venue make it all the more odd. Citizen Kane and WRRR – two takes on the circus that is human existence.

YSTC has added a few more performances to WRRR’s Yellow Springs run. There will now be shows on October 2nd and 3rd, at 8 p.m. each night and possibly at 10 p.m. one of the nights.