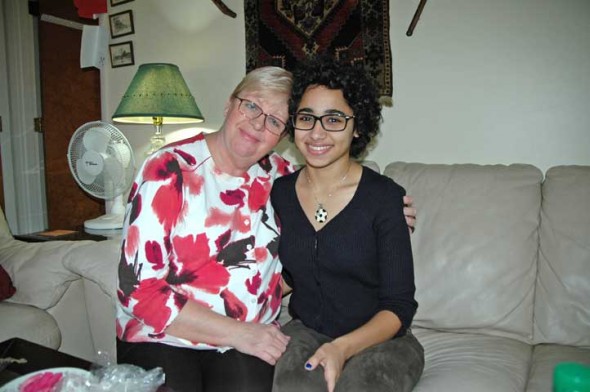 Antioch College student Jumana Snow and her mother, Susan, in their home. Mother and daughter moved to Yellow Springs from Jeddah, Saudi Arabia, in 2014 for Jumana to attend college. Coming here was a sort of homecoming for Susan, who grew up in the United States (in Vermont), but has lived in Saudi Arabia for 28 years. This is Jumana’s first time living outside the Middle East. (photo by Audrey Hackett)

This is the second article in an occasional series looking at why people choose to live in Yellow Springs. If you have a story that fits our theme, feel free to contact us at ysnews@ysnews.com.

• Click here to view all the articles the series

“It’s fate,” said Susan Snow, explaining how she and her daughter, Jumana, landed in Yellow Springs. Mother and daughter moved here in 2014, from Jeddah, Saudi Arabia, for Jumana to attend Antioch College. They share an apartment on Xenia Avenue, just adjacent to the college, where Jumana, 19, is a second-year student.

Fate — and an email Susan received years ago.

“I love to tell this story,” she said in a recent interview over plates of hummus, dates and pickled turnips. She was working in the counseling office at the American International School at Jeddah, she explained, when she learned, via email, that a little college in Ohio was offering full scholarships. Jumana was still a few years away from graduating high school, but the email stuck in Susan’s mind.
“I wanted my daughter to have some kind of education, but as a Jordanian girl in Saudi Arabia, that’s difficult to do,” she explained. Susan was born and raised in Vermont; in her twenties, she met and married a Jordanian man, Mahmoud Shetawi, and went to live with him and his family in Saudi Arabia. They raised a daughter there, and when it came time for college, Susan and her husband looked into schools in the United States.

Financing college was a problem. Jumana applied to, and was accepted by, several schools in Vermont, including the New England Culinary Institute, but the family wasn’t sure how to pay for Jumana to attend. Then Susan remembered the email.

“She applied, and a few months later had a Skype interview with Micah [Canal, the former dean of admission],” said Susan. On April 2, 2014, waking up after an obligatory mid-day nap in the Saudi heat, Jumana learned she’d been accepted. “We couldn’t believe it!” mother and daughter recalled.
Aside from the full scholarship, Jumana, who loves to paint and create, was drawn to Antioch because of its small size, diversity and strength in visual arts.

“I felt like there were lots of caring, loving people here,” she said. The fact that alumni had worked to reopen the school also impressed her. “I thought, maybe I could do something like that,” she said.

But Susan hadn’t lived in the States for 28 years, and Jumana never had, though both had visited Susan’s family in Vermont and California. Susan said she and her husband felt apprehensive about sending Jumana alone to live in the States. And they knew nothing about Ohio or Yellow Springs, Susan said.

“You read things online, you know, and it scares you,” she explained. So, in a move unusual by American standards, but perhaps less so by Arab ones (Susan described living with her in-laws for 20 years), mother and daughter came to Yellow Springs together. Jumana’s father remained in Saudi Arabia.
“When I was first accepted, I needed my mom,” said Jumana. “But I’ve gotten the hang of living in America.” She’s not sure she needs a parental presence now, she added.

“I want to be alone, to have that experience.” She’s looking forward to next year’s co-op abroad, probably in Spain.

Jumana said she feels safe and accepted at Antioch and within Yellow Springs. Susan agreed. “I feel safe here in this town,” Susan said. Beavercreek has a large Muslim community, she added, and people there don’t necessarily share her sense of safety. Susan currently tutors two Saudi Arabian women attending graduate school in Dayton; they were adamant about paying the small amount of money they owed her “in case something happened to them,” she said.

“Americans don’t know that much about Islam,” Susan said, emphasizing the warmth and graciousness she has encountered among Arab friends and relations.

“When you have guests in your house, they are more important than family members,” she said of the culture of profound hospitality she’s experienced during nearly three decades in Saudi Arabia, where she’s lived, and Jordan, where her husband’s family is from.

Susan said she preferred to keep her own religious beliefs and practices private. But she spoke a bit about her sense of cultural dislocation — of being American, yet also Arab.

“I feel like a baby here, having to learn everything again,” she said. The first year was tough. She felt isolated, and applied for many jobs but got few responses. Short-term stints washing dishes and selling jewelry didn’t work out, though she was glad to be given a chance to do something, she said. An administrative position at Layh and Associates opened up in September, and she got the job.
“It was such a relief,” she said.

Jumana said her own adjustment has been smooth. “It doesn’t feel that different than home,” she said of Antioch. “I hang out with friends, we go to the coffee shop, that kind of thing.”

She’s a soccer enthusiast — the afternoon she spoke with the News, she wore a soccer ball pendant around her neck — and plays soccer with an adult league in Dayton. A multi-sport athlete, she’s tried to revive sports like soccer, basketball and volleyball at Antioch, with mixed results so far.

Last year, Jumana was a Miller Fellow at the Yellow Springs Arts Council, where she also organized her own show of photographs and artifacts, “Captivating Jordan,” last spring. Cooking is another love, and she’s entered the YSAC cookie contest twice, winning second place both times (Susan won first last year). Both mother and daughter cook a mixture of Middle Eastern and American dishes.
One new dimension of Jumana’s life here is her exposure to social justice issues at Antioch. Last spring, she was part of a group of students who attended a Martin Luther King Jr. commemoration in Selma, Ala.

“It was really inspiring, all the people who came together,” she said.

This fall, she attended a leadership conference for people of color in Michigan. And just a few weeks ago, she and other Antioch students walked to express solidarity with their African-American peers at Mizzou.

“This is kind of new to me in the States, how different races are treated differently,” she said.
Jumana doesn’t know if she’ll stay in Yellow Springs, or even the United States, beyond graduation.
“I want to explore the world and find a place where I want to be and have a stable life,” she said. She envisions owning her own bakery or art gallery.

And Susan is not sure if she’ll return to Saudi Arabia, or if she and her husband will settle elsewhere. They have a house in Jordan, she said, in hills that remind her of Vermont.

Yellow Springs is likely a temporary stop. But one image of life here is unforgettable, Susan said: the Saturday morning peace activists.

“All those lovely people standing for peace,” she said. “I love those people.”