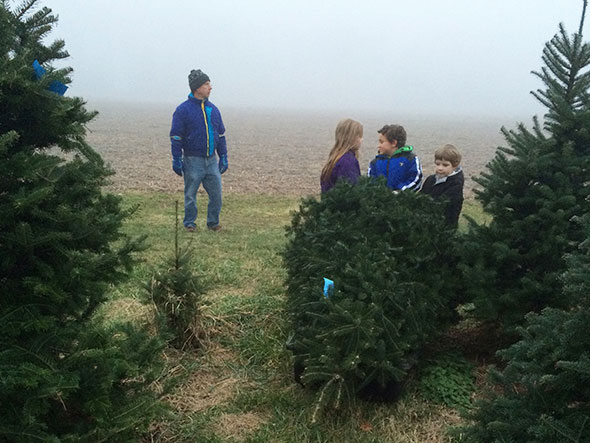 My son has been picking up on the seasonal progression of things. Anticipating Halloween, he asked me, “Do vampires come from October?” Last month, he came to the conclusion that pumpkins belong to both October and November. Now that December has arrived, he’s all about snow. He was pretty put out when our first snowfall evaporated before he got home from school. He wants to make snowmen and go sledding in the worst way. He has even claimed his toboggan for the season. 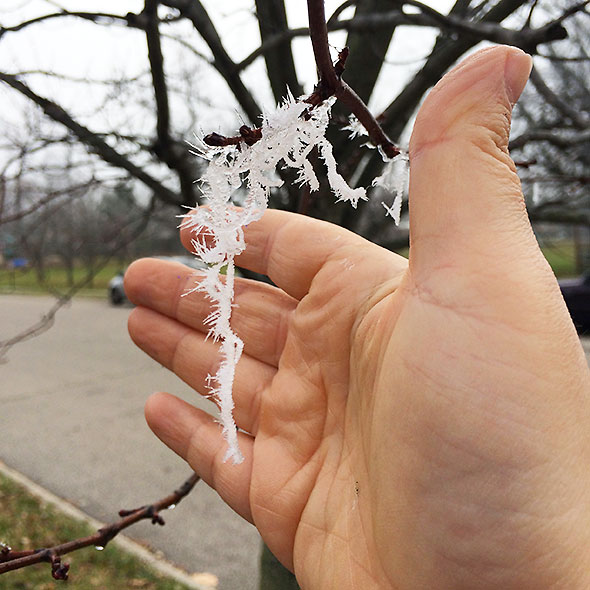 He isn’t the only one asking after the white stuff and when it should arrive. The Farmers Almanac has promised us a mild winter but more than average snowfall, so I’ve been counseling people wait for the scheduled start of winter. After all, autumn arrived on 23 September right on time. I’m not expecting winter for at least another two weeks.

That’s not to say that we’ve been patiently waiting at home. Rather we’ve struck out to meet the season halfway. While the weather may be waiting to kick in, the village is already in full winter holiday mode. We joined last week’s Santa Breakfast where we met the man in red for a morning of pancakes, crafts, and Christmas carols. We then headed out to Carl and Dorothy Young’s Christmas Tree Farm to hunt for evergreens.

Early that morning, a curious hoarfrost had decorated the outdoors in white spiked figures whose great Nordic heads, arms, and tails flexed in elaborate poses. By mid day, most had evaporated, but we spied a few exotic crystalline creatures before they disappeared—-snap—in a spray of mist. 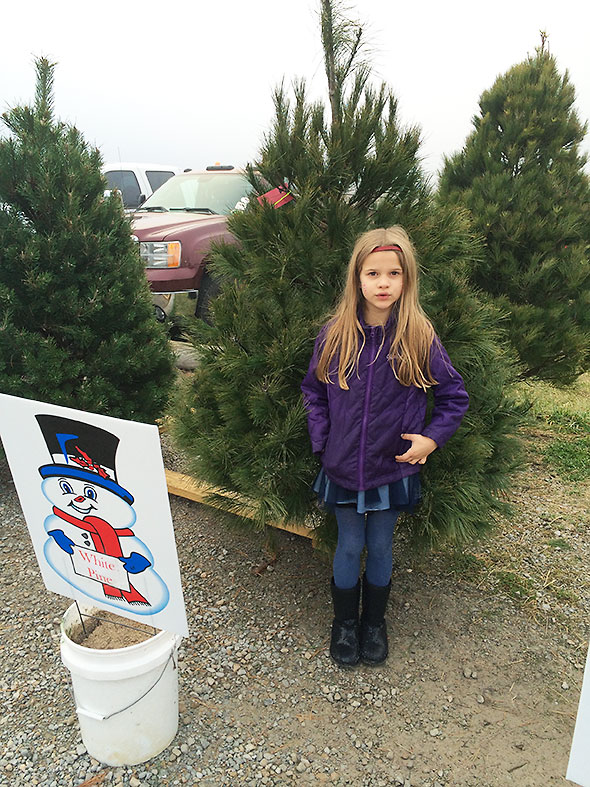 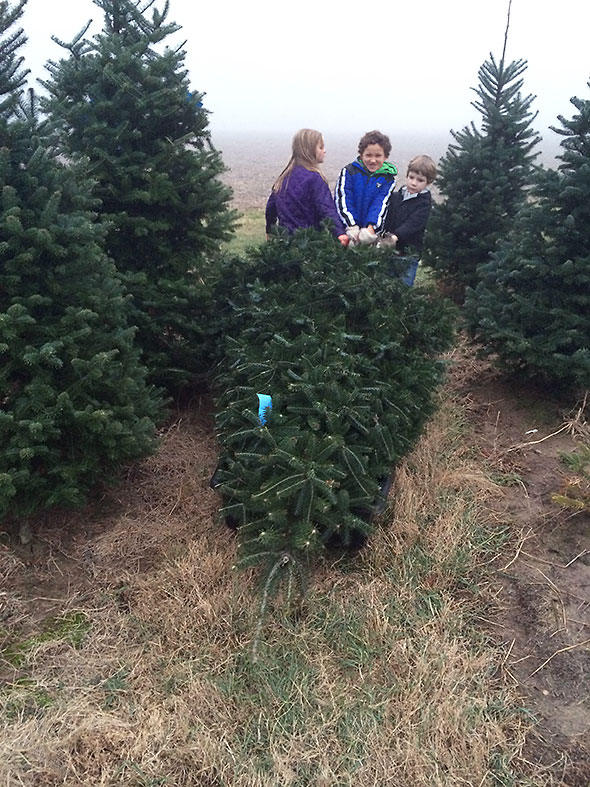 The farm was enveloped by fog when we arrived drenching the trees with beads of moisture. We picked up a sled at the barn and broke news gently to the children that they wouldn’t be able to ride aboard given the lack of snow on the ground. Taking turns shuttling the low black toboggan over the grassy field, we hiked around the north side of the red barn to where the white spruce grow. Last year, we brought home a beautiful spruce and wanted to try our luck among its brethren again. Cutting northeast at first, we walked south along the main corridor where the white spruce grow to the west and canaan firs to the east. Despite my interest in the white spruce, my eye kept being drawn east. Tall and slender compared to the luxurious spray of the white spruce, the canaan firs were a deep blue green that radiated in the misty light. 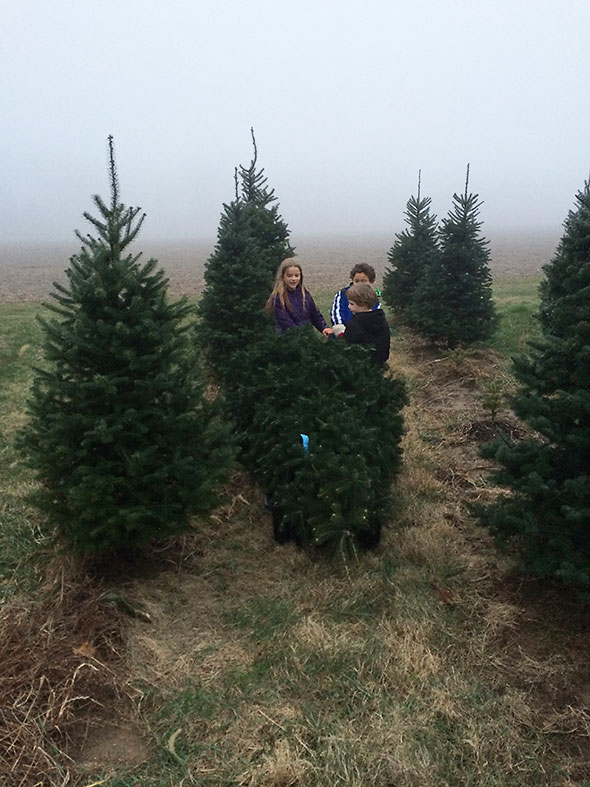 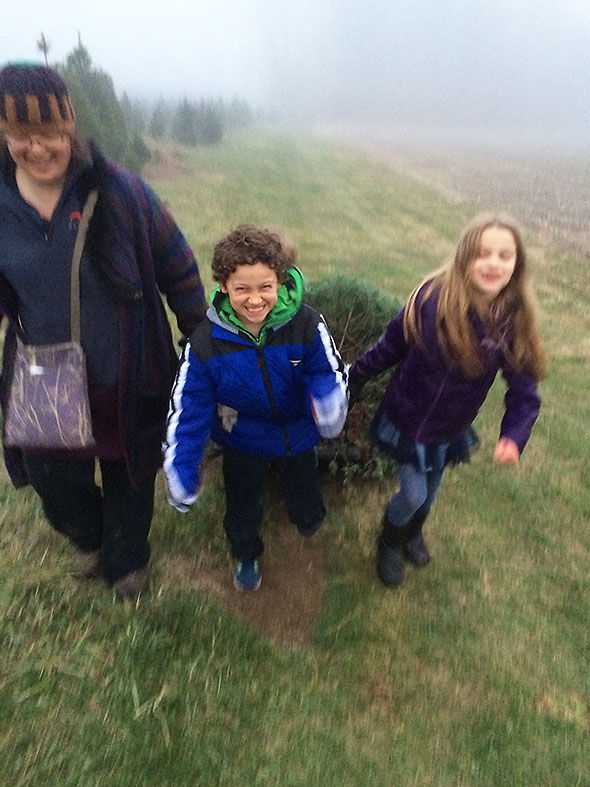 Walking slowly looking east and west then east again, we reached the southern most point of the farm and turned into the canaan fir…my husband drawn to their slender profile and myself entranced by their rich color. We found a tree about 14 years old with proper height, a good crown, and a low swinging skirt of dense branches. It was a heavy tree, and it overflowed the sled once we cut it free of the ground and lowered onto the skid. After settling it as best as we could to keep its branches from dragging against the ground, the children seize the reins and pulled sled free of the furrow. We had invited a friend of our daughter and son along with us. The three young ones were remarkably industrious fighting friction in the long haul back to the barn. Mostly they shared the load alternating pulling from the front and pushing from behind, but each claimed an opportunity to demonstrate strength on their own. Once we gained the barn, we queued up with our tree and had it baled for the ride back home. We then went inside to pick out a wreath for the front door and to pick up a comforting dose of hot chocolate and popcorn. 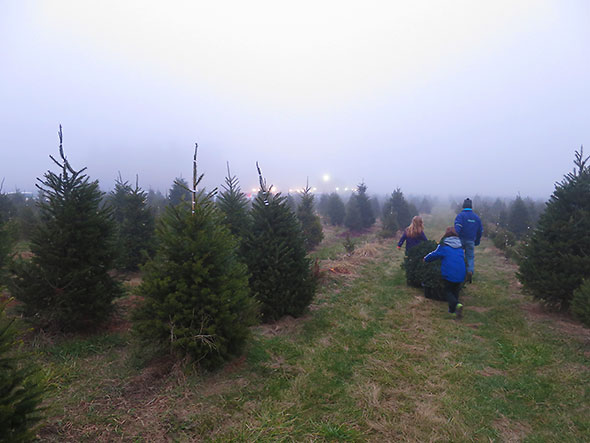 We sang carols in fine voice on the ride home…our young guest proving as good a tenor as he was a tree hauler. While I made a pasta dinner for the five of us, Jeremy put the tree in a bucket of water where the tree spent the night acclimating to the inside. Sunday evening we brought the tree into the living room and placed it just off center in the front window. Lighting the tree was a joint effort…a process that went well once I let go of established protocol. 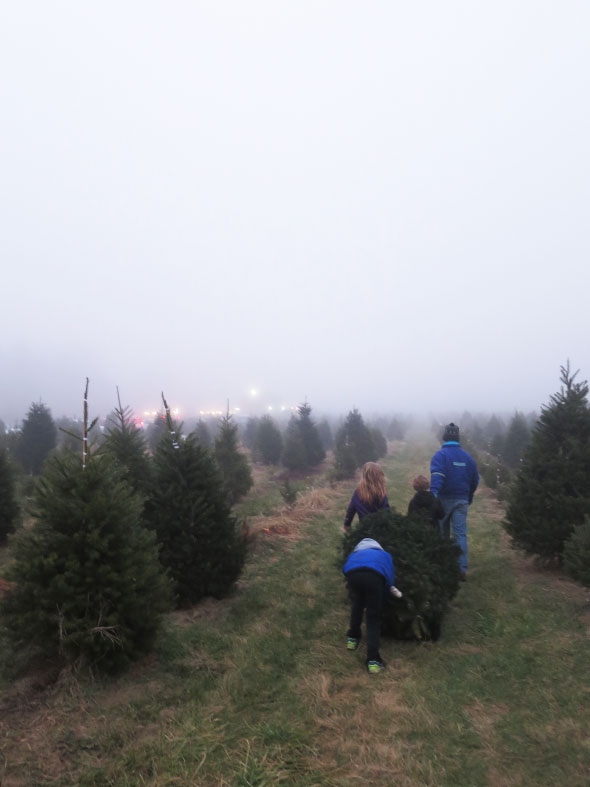 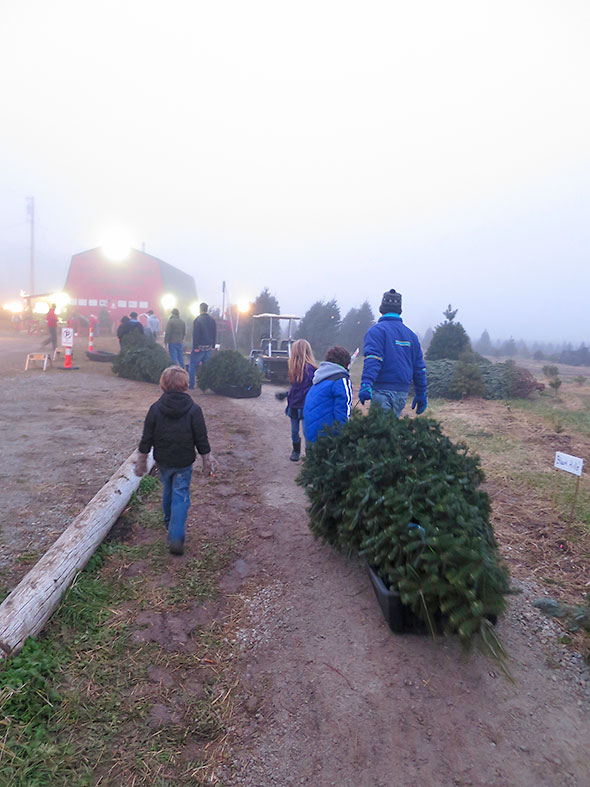 The usual order of things is I banish the rest of the family from the living room then circle the tree unspooling the long string of lights as I interweave it through branches. This year, my son jumped forward and with purpose unwrapped the lights as Jeremy and I released the tree from its baling. His sister and father soon joined him gathering up the long strands together with no fear or thought of tangling. After a mild bout of hyperventilating, I let the family indulge their instincts. Miraculously, they shook the cords apart easily and spread length out from the living room to the kitchen and out into hallway. My son walked forward to offer me the female plug and blinked expectantly. Gamely I lassoed the top of the tree once, twice before pointing out a dilemma. Every turn around the tree would loop the stretched-out string of lights twice. For every loop mounted on the tree, a second loop of slack would circle the tree in a reversed spiral. If we continued, I warned the slack would keep wrapping and become unmanageable. 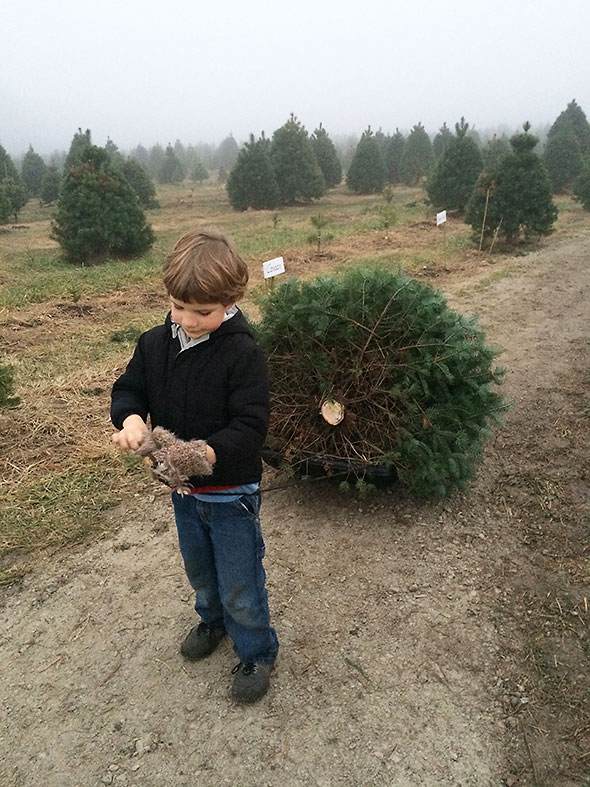 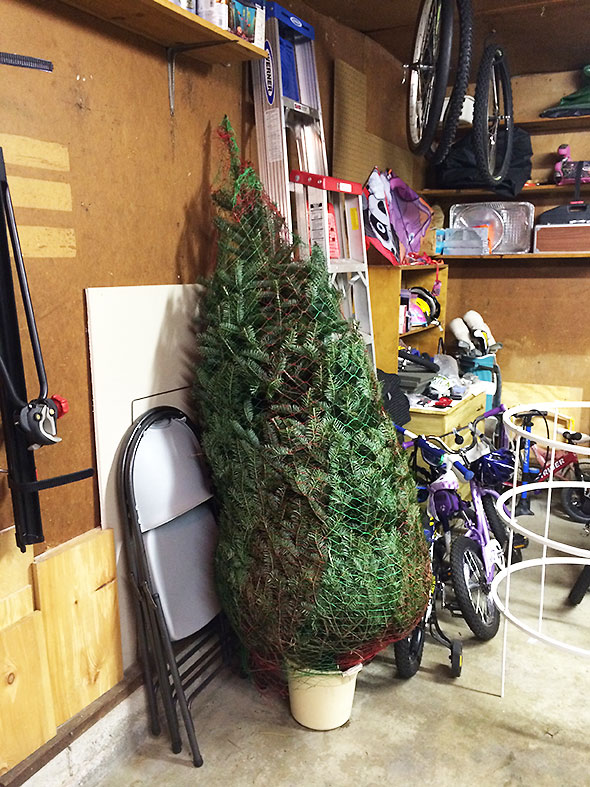 Together, we improvised a team effort with my son feeding the cord back to the tree, my daughter and I guiding the lighted string into place, and my husband rotating the tree from the bottom. [Note to self: design a dolly/tree stand for this purpose.] To my great astonishment and pleasure, teamwork triumphed. We sank onto the couch and drank in the sight of our success. 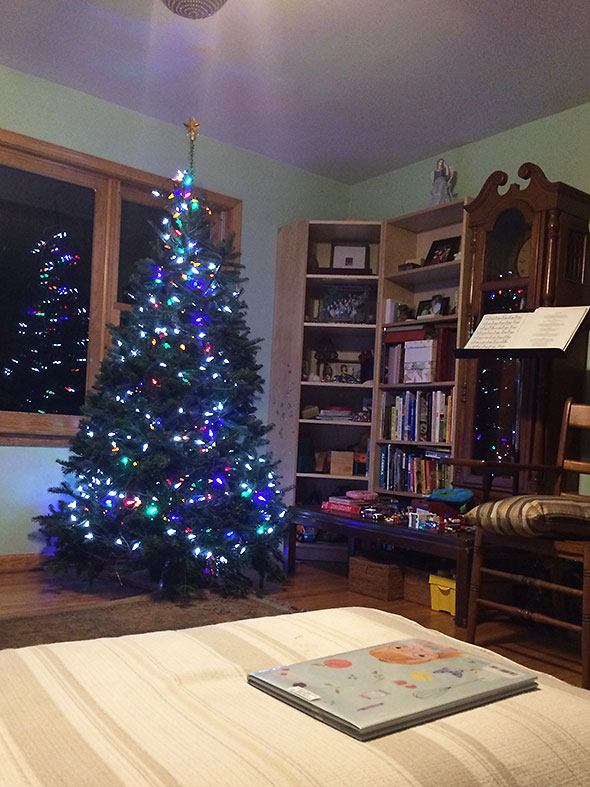 Over the course of the week, we added to our tree little by little pouring over mementoes as we lifted ornaments from nested storage. I listened to the children’s stories surprised by the flood of memories that they themselves could release. Christmas can be hard. There are so many fragile things, so many dear keepsakes I am afraid of being marred or of losing. I feel this year we turned a corner…and by we I mean me mostly…where I don’t new to fear. This time, I found trust preserves more than it risks.

The weekend brought more festivies…the holiday concert at the Antioch School on Friday, the Dayton Ballet’s Nutcracker Saturday afternoon, and the fantastic Suessical Jr. produced by Mills Lawn School. Saturday morning, Mills Lawn hosted a well organized, well attended workshop on building gingerbread houses and the village hosted carriage rides and holiday festivies Saturday night. Sunday afternoon, my children are looking forward to making their own contribution by performing to Tchaikovsky at the holiday recital of the Gary Geis School of Dance in Springfield. He will play a tin soldier, she a sugar plum fairy, two extra special holiday treats.

It’s been a wonderful time. Still, after the month’s whirlwind of activity, I might be ready for a winter storm myself…as long as it means a nice, quiet, leisurely sit-down in front of the fireplace, one hand around a hot cup of cocoa, the other nudging the burning yule log to life.