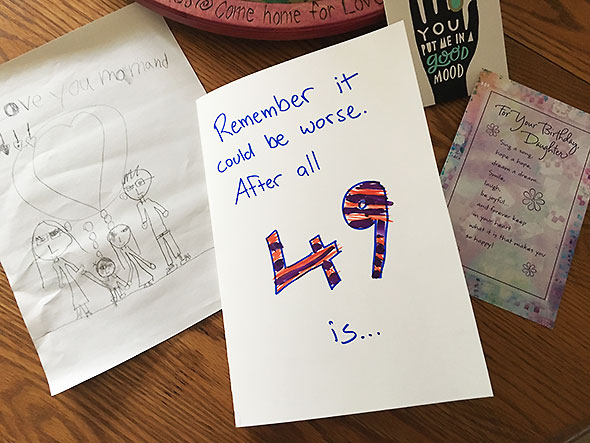 I like birthdays. I love the booming renditions of the happy birthday song and the day’s parade of surprises. It’s the best excuse to pile on the hugs and to load up on enthusiasm.

My birthday holds special magic. I felt good vibes streaming in from all corners, starting from first light. Jeremy had encouraged me to sleep in and at dawn sent the kids to nuzzle me awake. Together we crooned a tune that my dad rustled his sleepy children awake with:

Starting out as a waltz, the song shifts into a march.

Merrily birthdays marching on
Gaily one by one.
Keep in step and don’t be shy.
Growing up is fun!

To this family standard drawn long ago from a 1960s television show, my son adds Pow! sound effects…really a touch of pure genius. Instinct may tell the birthday person to burrow down under the covers when that first “Good morning” roars into the bedroom, but who can resist the affirming “Pow!” of a well-earned growth spurt? We end in a fit of giggles, and the kids shout out “again, again” for another robust rendition of the old favorite. 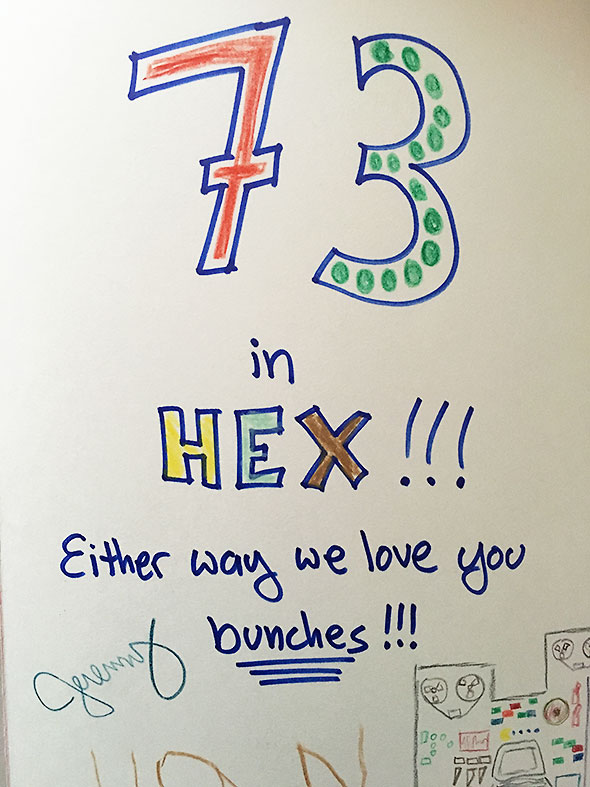 I wasn’t sure I was going to like being 49, but I do. It’s a great number…seven times seven…fairly brimming with good fortune. I spent the workday in an inspired state…writing research papers and talking with Dayton business leaders about science center plans…and returned home to homemade birthday cards, a gorgeous bouquet of flowers, and stack of presents to open.

Wednesday proved a milestone day also. On the advise of Sharon Short, executive director of the Antioch Writers’ Workshop, I attended my first meeting of the Society of Children Book Writers and Illustrators in the lower level of the Upper Arlington Library, Columbus OH. The Central Ohio SCBWI Chapter organizes a group critique of writing samples twice a year, and they offered that opportunity at this month’s meeting. I brought the prose of an abc book—working title Little Characters for Later Stories—that I developed with my daughter and a friend Valerie Rieker. In all, five authors brought writing samples, and we went around the room counter clockwise covering each entry. Three also brought query letters—the letter you send to agents and editors to present a book idea—and we read through those also.

We followed the critique guidelines provided on the chapter’s webpage. For each author, we pass around 10 copies of their writing. Manuscript excerpts are limited to 500 words. At the top of the page, authors list their name, the piece’s working title, the target market, and the number of words in the complete manuscript. After the writing sample is passed out, someone other than the author reads it aloud. Presented in this way, the author can hear how their words come across to someone with no prior experience or preconceptions. After the reading, the group offers comments discussing what worked, what might need refinement, and whether we think the author is on track.

Everyone presented interesting, well-conceived ideas. I quickly appreciated Sharon Short’s advise to attend. Two writing samples were read aloud ahead of mine, each an excerpt from a picture book aimed at children ages 5 to 10. The first was set in rhyme, its location placed at the base of the Eiffel Tower in Paris. The second was straight prose, filled with the whirling dervish of a working ketchup factory. Both were funny and well-written. The authors’ back stories—presented in query letters—were equally intriguing. Next came my turn. The second author—a truck driver who peppered his story of ketchup bottling with colorful commentary from the industry—read my twelve lines aloud. He read the entire poem—all 119 words—describing a quirky meet up of lowercase letters. When he finished, he looked up from the page with an expression that gave me hope: one of respect and genuine pleasure. He liked the flow. Others around the table agreed.

To balance his reaction, I encountered quite another look from the SCBWI board officer sitting opposite me: She was genuinely perplexed by my approach and challenged the book’s premise with a healthy skepticism. She agreed that the first line established the appropriate tone and interest but argued that the point of the book was obscure. She counseled and I listened: I would need a solid query letter and, still, I would have a task selling this re-imagined alphabet. Forewarned is forearmed. It’s one thing to write lines that work, quite another to write a book that will sell. I came away with an action plan on how to proceed and formulate a query letter fit to its marketing task. 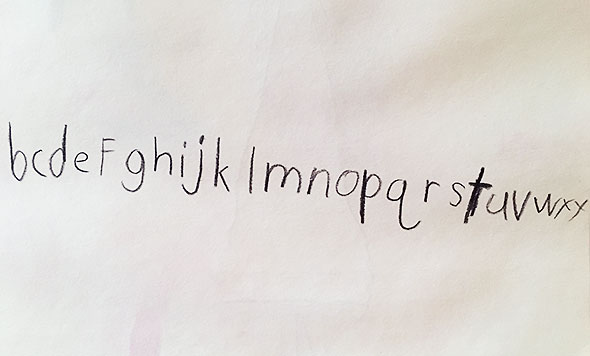 Our re-imagined alphabet had a humble start. My daughter and I came up with the idea early last year. Our intent was to contruct a memorable story that would guide my daughter in her handwriting. She often flipped letters—like b and d or p and q—and would run into delays as she stopped to erase and redraw printed letters in their proper orientation. We crafted a story that would keep the correct orientation of each letter forward in her mind and introduce the skill of reading words by shape. We put the first four lines together and sent them to my friend Valerie Rieker to illustrate. 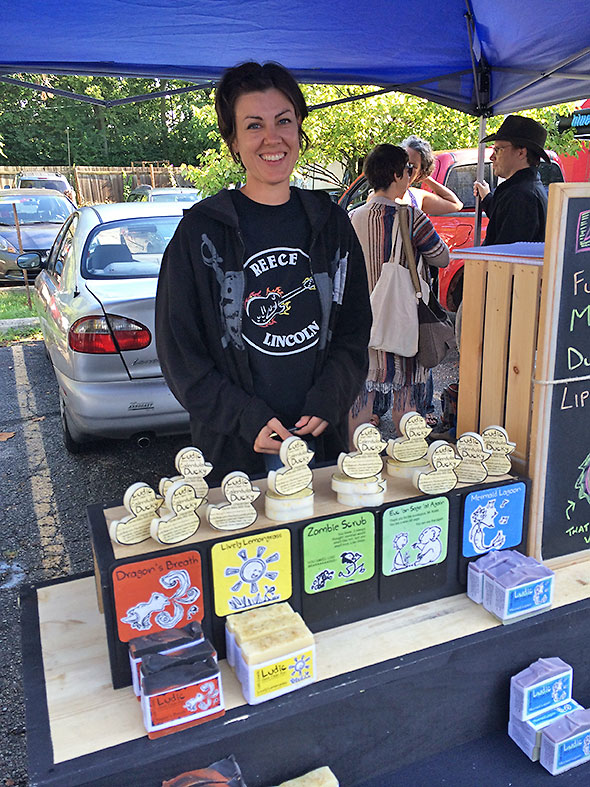 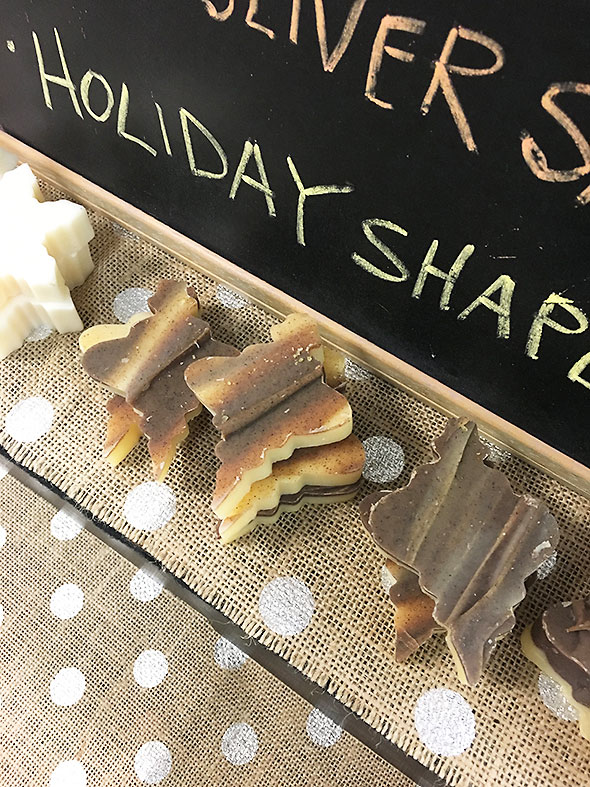 I know Rieker from the Winter Farmers Market. She’s the owner and creative force behind Ludic Soap. Rieker handcrafts her products from lye and essential oils. She also designs her product labels. Her illustrations caught my eye when she first arrived at the winter market last January. The soothing effects of her soaps won my loyalty. 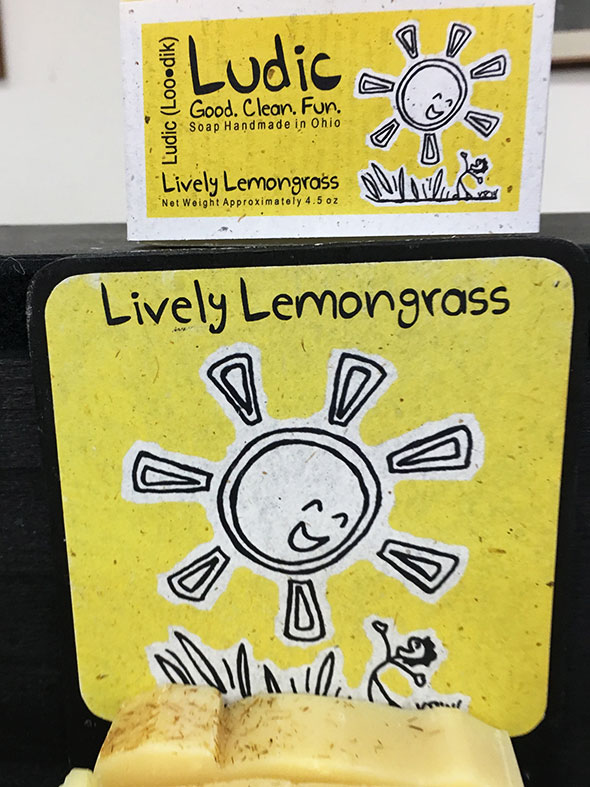 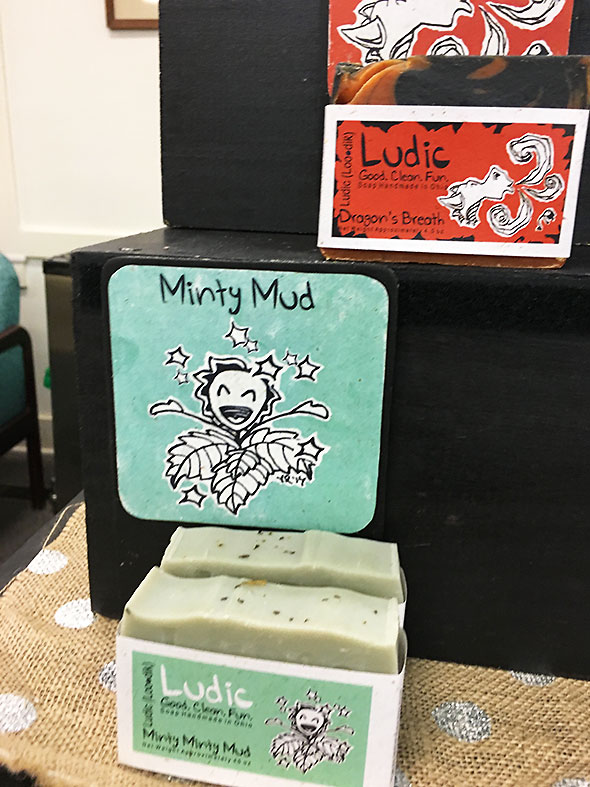 While visiting the Kings Yard farmers market this summer to select various soaps from her inventory—favorites like Midnight Lavender, Mermaid Lagoon, and Zombie Scrub—I talked to Rieker about the abc book. Her graphics in black ink matched my vision for the alphabet characters, and I told her as much. Rieker showed interest in trying her hand at illustrating the book. We exchanged emails, and I sent her those first four lines. She emailed back scans of drawing samples. 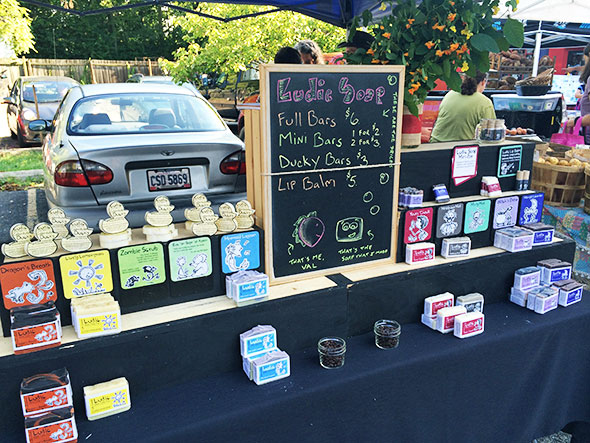 I got inspired by her unexpected, charming approach. At the time, I was working on the remaining eight lines and was giving them with considerable thought. My challenge was to follow the structure established by the first stanza and, within the narrow confines of that structure, complete the arc of a compelling narrative. Rieker’s drawings showed me the way. The story’s direction had been subtly sketched by the first stanza but leapt off the page into full motion with the illustrations. Within a week of her email, I had the overall structure in place and completed a solid draft of the narrative.

My daughter and I refined the writing from there. We selected words with care to spotlight certain characters. During one rewrite, my daughter suggested the abc’s book working title. She sensed immediately that we had other stories to tell and set her new purpose to developing more storylines. 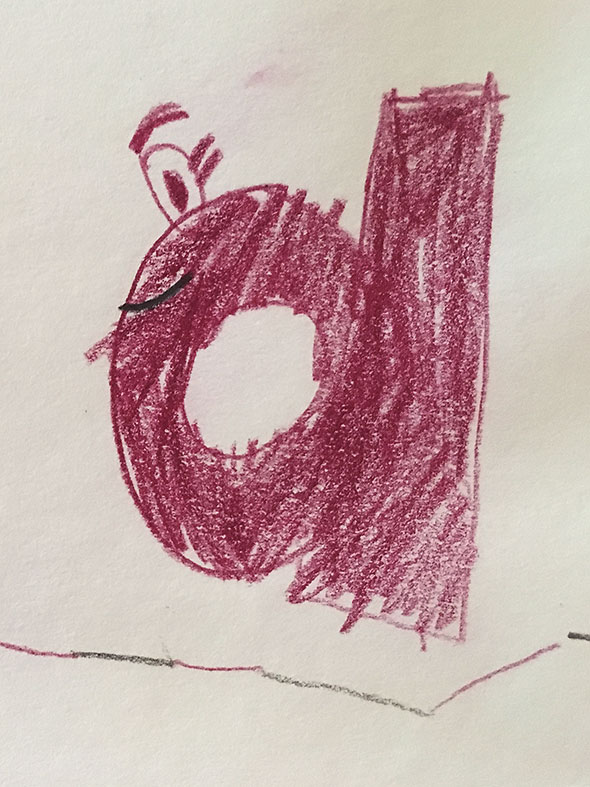 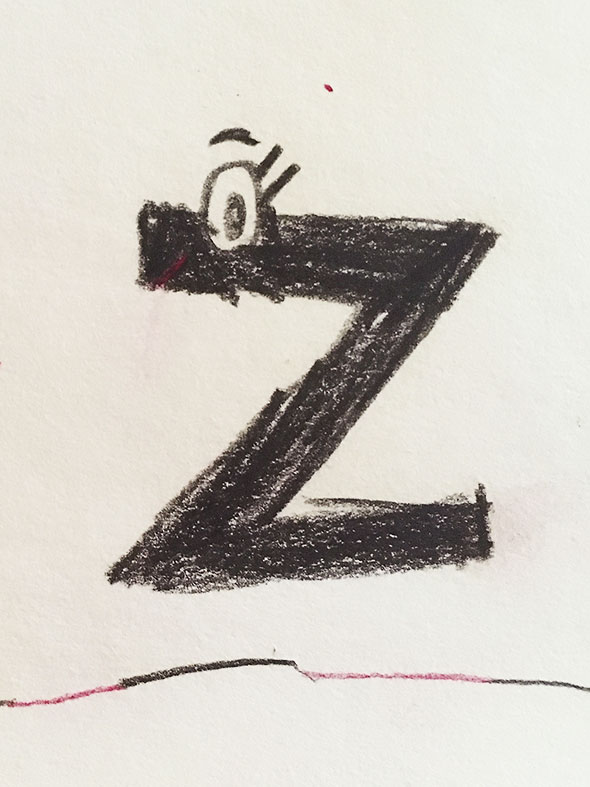 My daughter’s favorite part of the original story is the close friendship between little a and little z. She recognizes herself in z and myself in a. She loves how, in their continued adventures, these two characters maintain their strong mutual bond. They don’t let the rest of the alphabet get in the way. 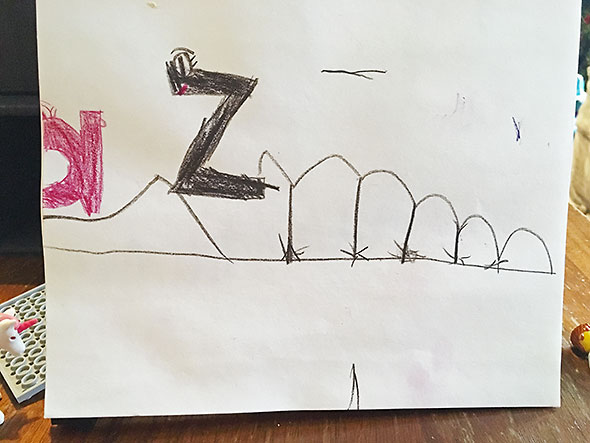 On Wednesday night, the experienced writers agreed that new authors should prepare two separate books for their pitch to agents and editors. The publishing houses need authors with depth and the ability to build diverse audiences. While some aspiring authors in the room might have felt daunted this advise, I felt a validation. Organized around the mission of the science center, I’m ready to act. On the math book next, I do believe!

As I look at my age this year, I see the number 49 as remarkable…the square of prime number 7 and the clever clue that recently helped me unearth interesting patterns in basic number theory. If 2016 is the year that our plans break out, we need to be smart, adventurous, and organized. We also need to be lucky. So, 49 feels a right and good age to be. This year, I need more than a lucky number seven like of fortune. Good thing I am seven squared.