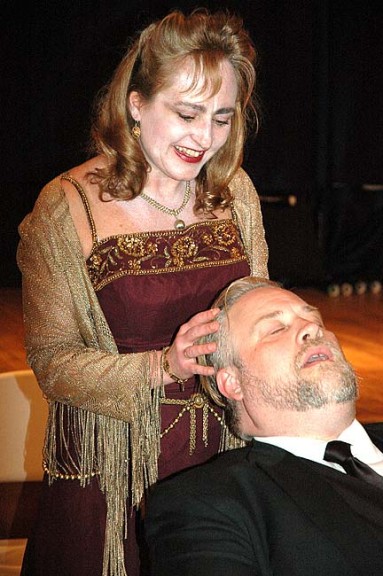 After two years of presenting a diverse array of plays to area audiences, the members of Yellow Springs Theater Company felt the time had come to add a strong comedy to the mix.

And springtime seemed the perfect setting to offer the comic work its British playwright, Noel Coward, reportedly referred to as “An Improbable Farce in Three Acts.”

The play’s official — and well-known — title is “Blithe Spirit.” An immediate success after its 1941 London and subsequent Broadway debuts, the work would go on to be adapted for film in 1945 and turned into the Broadway musical “High Spirits” in 1964. It had television and radio presentations in the 1950s and ’60s, and has seen multiple stage revivals over the decades.

Ed Knapp, the director of the YS Theater Company’s new production, which opens this weekend at First Presbyterian Church, said he thinks the play is likely Coward’s most performed, if not most popular.

“This is such a fun show,” he said. “It’s an intellectual comedy, with physical and situational humor.”

The premise involves a socialite novelist, his second wife, a seance and the spectral return of his none-too-happy, deceased first wife who does everything she can to disrupt the second marriage. What’s more, the only person who can see the ghost is her husband.

Coward wrote the play in less than a week while on a brief get-away from London after his office and apartment were destroyed in the Blitz during the beginning of World War II.

“It’s bizarre to think what was going on at the time,” Knapp said, noting the juxtaposition of Coward not only writing, but also debuting a light comedy amidst war conditions.

“But really what better time to put out something that takes you out of yourself and allows you to laugh,” he added.

With the YS Theater Company ready to do a comedy, “this stuck out as the one to start with because it’s so well known and so good,” Knapp said.

The director noted that the local theater company’s repertoire has included “D’Arc Comedy,” which is, as the title suggests, a dark comedy. But a Noel Coward comedy is another matter entirely.

Knapp, whose local theater credits include working with Center Stage in the 1980s and into the ’90s, said he thinks the last time a Coward work was presented here was at Center Stage. “I don’t think Coward has been done since the ’80s or even ’70s.”

While performing a Coward play has its pleasures, it also can be a challenge.

“You have to get the timing right,” Knapp said. The dialogue is witty and urbane, and the flow of words is important to landing the humor. “You can see in the script where a straight line is a set up to a joke.”

Knapp said he cast the show based on his knowledge of and experience with the performers. “Everyone that is doing this show has done things for our theater company in the last two years,” he said. “I was able to see who we had in the company.”

He said he then assembled the players according to the needs of the production and his vision for it.

One place where he diverged from traditional casting was in the role of the medium, Madame Arcati. Usually acted by an older woman — Angela Lansbury played the part in the most recent Broadway revival — the local production features Yellow Springs High School alumna Kayla Graham, who is in her 20s.

“Kayla brings something different to Madame Arcati,” Knapp said. “Without giving anything away, I like the dynamic to the younger Madame, it gives a different feel”  to some of the interactions.

As a company in which the actors are familiar with each other and Knapp is familiar with their abilities, “we’re able to play around and give it a different feel, and hopefully something everybody likes,” Knapp said. “We do really have good performers. Ellen is great as Elvira. Rob is a great Charles.”

The production has come together quickly, he said. with rehearsals beginning six weeks ago. Knapp said he didn’t want to over-rehearse. “We want the jokes to be fresh.”

“I’m really anticipating getting this in front of the audience. … It’s a fun, fun show and I can’t wait to present it to everybody,” Knapp said.

Performances will be Friday through Sunday, April 8–10 and 15–17 at First Presbyterian Church. Curtain times are 8 p.m. Fridays and Saturdays and 2 p.m. Sundays. Admission is $10 at the door.