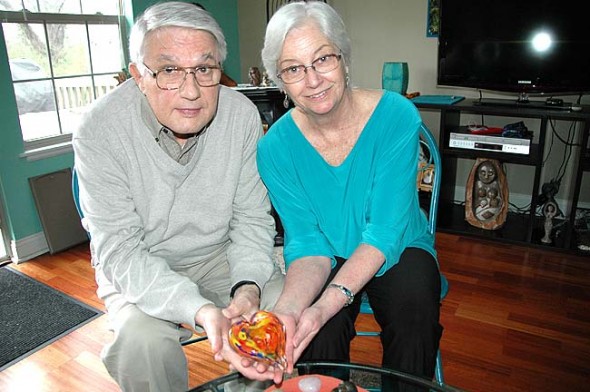 Tom Malcolm and Denise Runyon teach Heart Rhythm Meditation each Tuesday evening at the Friends of the Heart Center at 794 Dayton St. They are sponsoring a workshop April 16 and 17 that features Susanna Bair, the co-creator of Heart Rhythm Meditation and co-founder of the Institute of Applied Meditation, who will explain the technique in a daylong workshop and work with individuals in a half-day heart danshan. (Photo by Diane Chiddister)

As the current political situation makes clear, many Americans feel angry and frightened, especially at those whose skin color, religion or nationality are different from their own, according to Denise Runyon and Tom Malcolm. These fears seem to be fueling the rise of politicians like Donald Trump, who advocates building a wall between Texas and Mexico and passing laws to keep Muslims out of the country.

But Runyon and Malcolm suggest that Americans should try a different antidote to anger and fear.

Rather than building walls and passing restrictive new laws, “I say we have to build stronger hearts,” Runyon said in a recent interview.

Runyon and Malcom know something about hearts, as they run the Friends of the Heart Center out of their Dayton Street home. And later this month they are sponsoring a two-day event, “Building the Culture of the Heart,” with meditation teacher Susanna Bair, the co-founder of the Institute for Applied Meditation, a national organization focused on heart rhythm meditation.

The event begins with a workshop on Saturday, April 16, at Antioch University Midwest. Saturday events begin with a free session from 9 a.m. to 10:30 a.m., then a full workshop until 5 p.m., at a cost of $50 for two people. On Sunday, interested persons can sign up for a four-hour heart darshan at $200, either in the morning or the afternoon, with both taking place at the Friends of the Heart Center, 794 Dayton Street. To register, call 520-299-2170 or go online to iamheart.org.

“Building a Culture of the Heart” intends to help people strengthen their hearts through the heart rhythm meditation, according to Bair in a telephone interview last week. While some meditation practices seek to transcend real-world problems and instead attain an otherworldly feeling of “bliss,” heart rhythm meditation aims to take people more deeply into their emotions, she said.

“We use the energy of the heart to move into difficulties,” she said, and ultimately, by going deeply into feelings rather than shutting them down and using the energy of heart rhythm practices, the heart is able to integrate the emotions into wholeness, she believes.

At the Saturday workshop, attendees will consider “how to create a healthy heart,” according to Bair. including finding more meaning in work and relationships. Sunday’s event will be smaller, and Bair will work with people in small groups to address their specific issues.

“Our everyday culture is not taking care of the heart,” Bair said. “We need to learn to take care of it.”

Heart rhythm meditation teaches practitioners to synchronize their breathing with the beat of the heart, according to Runyon, who has been practicing the meditation for about five years.

Runyon said she was skeptical when she first heard of the meditation technique, at a workshop in Xenia. But as a lifelong spiritual seeker, she decided to attend.

“I liked it, liked the practice,” she said. “There was something there I wanted more of.”

The workshop led to a retreat, then several years going deeper into the practice through the online University of the Heart, sponsored by the organization cofounded by Bair. Runyon and Malcolm both graduated from the program, and Runyon followed up with more training. and is now a certified mentor. The couple also holds a weekly meditation each Tuesday at 7 p.m. at their center, located at their home at 794 Dayton Street.

The breathing/heart synchronization lays the foundation for the practice, and is the focus of meditators’ first year of practice, Runyon said. Practitioners believe that this synchronization creates a coherence in the body that allows emotions to surface.

“We intervene in the breath, make it full and rhythmic and align its rhythm with the heartbeat,” Runyon said. Doing so allows meditators to feel buried emotions, she said, and feeling emotions opens the practitioner up to living with more awareness of the forces that may be influencing them.

“If we’re not aware of our wounds, we act out of them,” she said. “When we bring consciousness to our wounds, there’s a huge shift in how we see reality.”

Further study of the technique involves training to experience various dimensions of the heart, along with sound practices to help practitioners enhance different qualities they seek to experience. Bair will cover all of these levels of meditation at the workshop.

For Malcolm, learning heart rhythm meditation has helped him learn to love better. He believes it has improved his relationship with Runyon and afforded him more empathy and understanding.

“As I became more aware of my heart, I was able to start living in a more heart-centered way,” he said.

Living in a heart-centered way leads to happiness, according to Bair. And beyond happiness, Runyon believes the topic of the upcoming workshop, “Building the Culture of the Heart,” will lead to spiritual activism that could help heal wounds not only in individuals, but in the world.

“A change in heart consciousness brings in the state of awareness of our real, not imagined, connection to each other,” she said. “The world gets better with every heart that heals.”