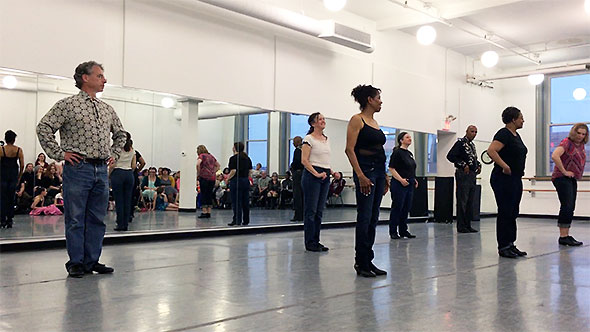 Well, this week has been full. There’s no other way to describe it. I bought tickets to the west coast, hacked a image to text translator, helped build a website, hiked to the Glen Helen Raptor Center with the Mills Lawn Kindergartens, took a course on non-profit governance, applied for a new job, and explored the world of venture capitalism. Personally, I could use a couple extra hours of sleep but, hey, it’s been exciting.

The thing that has me super psyched this week is dance. My children prepared for their annual recital with the Gary Geis School of Dance, and—here’s the kicker—my husband made his debut with the adult tap class.

Others might be surprised by Jeremy’s recent interest in the traveling time step, but me? Not so much. I know the moment when I realized that I was in danger of losing my heart to Jeremy. It was the day he suddenly swept me into a waltz at the 1998 National Folk Festival. It did not escape me even early in our acquaintance that he had the feet of a dancer, and then he showed off his skills from the series of ballroom dancing lessons. Dancing may not be everyone’s thing, but he floored me. I was pretty much a goner from that moment on.

Jeremy has been studying tap for four years now. It’s interesting how he came to tap. We began taking our daughter to dance lessons at the Gary Geis School of Dance when she turned three. Mr Gary and his partner Mr Mark confided that Jeremy made an impression on them when we first arrived at the school. He’d wait in the sitting area with the other parents dressed in his military uniform and wearing a clouded expression that seemed to express he’d rather be anywhere else than surrounded by pink tulle. His thoughts were likely elsewhere on bill and office politics, but whatever was on his mind I think it is fair to say Jeremy was not immediately sold on our investment in dance classes.

For her part, our three-year old daughter seemed to enjoy the mirrors of the dance school more than the actual dancing. Though she’d tapped out “Baby, Take a Bow” beautifully with the Webby Dance Company just as she turned three, we struggled with getting her to attend during her ballet classes at Gary Geis. We were tempted to have her sit out that first recital at the Kuss Auditorium skeptical that she’d be able to keep up with the rest of the performers, but then we figured “Heck, she’s four. What are we stressing over?” She surprised us in the end and performed the recital piece on stage with considerable precision.

I started taking classes that summer on the encouragement of our friend Jen Clark. She had joined the adult ballet classes and recommended them highly. Now I’ve taken classes in many parts of the United States from New York to Los Angeles but I find Mark Cumming’s classes exceptional. The difference? His choreography! Every class is a rich exploration. I’ve never moved so much in a ballet class or progressed through so much of the discipline’s forms and movement. So I joined, our daughter progressed, and even our son age two began to exhibit interest watching the Gary Geis Dance Company’s performances with rapt attention.

In the meantime, my husband took a teaching position at Central State University. As he prepared for teaching, he thought a lot about challenge physics is and what it was like to learn something entirely knew. His mind turned to dancing. We’d seen several dance concerts at that point and many virtuoso performances by Gary Geis himself. When Jeremy watched Gary tap, he thought “Wow, what if I could do that?” When he learned that the adult tap class met on Thursday nights, he thought “Perfect! I don’t teach on Friday mornings. So Thursday is it is!” He asked that we work a class for him into the family schedule and since it only seemed fair and, well, awesome! we all agreed.

Once Jeremy got going, momentum carried him forward. That and the force of Gary’s personality. I could see Jeremy’s latent dance ability in the way he moves, the way he works through challenges, but he was skeptical that he brought much in raw talent. Gary’s talent inspired him along with his mentor’s gift for storytelling. Still it was all so new and everything Jeremy learned in class seemed to evaporate out of his mind as soon as he left the studio.

Still Jeremy drilled and drilled and drilled. Finally February 2015, Gary introduced him to the traveling time step. The step was different than others Gary had taught in that it started on count eight instead of on count number one. This change up intrigued Jeremy, and the step clicked with him. He started practicing outside of class, scuffing the kitchen floor with his metal soled shoes until he mastered the single eight count step. He found videos online and watched them noting how they counted out the step in a different way.

He realized that he was learning a language. The first two years had been an extensive vocabulary and, after all the drills and repetition, finally things were starting to stick.

This year brought further progress. Gary started choreographing a piece to Jim Croce’s Bad Bad Leroy Brown. Jeremy was like “Whoa, that’s fast!” but Gary was determined. So Jeremy brought his tap shoes with him whenever the family was at the dance studio, and he practiced his steps in an open room. His fellow classmates soon found him. Gail and Cindy took to joining him and mentoring him along. Jeremy became determined too. He was going to be ready for June and the annual recital.

Gary’s death in March hit Jeremy hard. They had been working on the piece just the week prior, and class was schedule for the day that Gary suffered a massive stroke. Suddenly this great force, this nurturing presence was gone. In its place burned a fierce desire to affirm all that Gary had entrusted to his students and to propel his legacy forward.

Jeremy practiced even harder at the studio and at home. He worked with Gail and Cindy and the rest to the Thursday tap class to finish the piece and contributed where he could…coming up with the bit where the dancers collapse from exhaustion.

The June recital was moved up to May to accommodate Mr Mark…his need to be with his family and to mourn his husband’s passing. At Friday’s performance, there was a tension and complexity that brought the dancers’ work to an astonishing level of maturity and often I had tears streaming down my face.

For the second to last piece, my husband took the stage wearing jeans, the crazy button shirt that Jen Clark squirreled for him for the adult prom, and a bolo tie. A bolo tie? First time for everything! The music started in, the women dancers gave up a whoop, and they all dived into the dance. Mr Mark had introduced the piece announcing loudly and proudly that this was Jeremy’s debut performance. Otherwise, you might never have guessed! My man did more than hold his own. He fa-lapped, turned, and tapped like a man inspired. My favorite moment was the one where he spun around and raised his hands in salute…his index and middle fingers forming Vs for victory.

Cindy warned him afterwards not to forget the combinations. They are going to perform the piece again next year as part of a tribute to Gary’s many contributions to Springfield and the world of dance. Jeremy himself? He’s starting to choreograph a piece for himself.

Somehow it’s happened. No matter whatever else happens in my life, all else is gravy compared to this: My family is a dance family. Dreams, my friends, do come true.