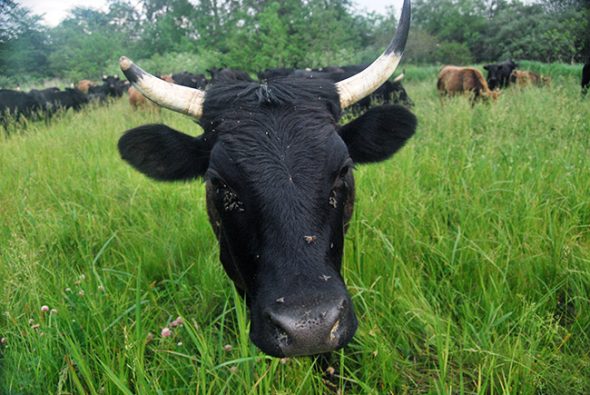 Bulls on Parade – Cattle behavior on an organic farm

Jon Paul and Megan Rion own an organic farm just out of town called Orion Organics. They produce an assortment of fresh fruits and vegetables grown without pesticides. They also have a herd of beef cattle that are raised on pasture. I asked Jon and Megan about their cows and how they interact with each other and the environment around them. Cattle behavior can seem fairly dull to casual observers, though if you immerse yourself in their world, the dynamics of the cows’ social structure and grazing habits are anything but. 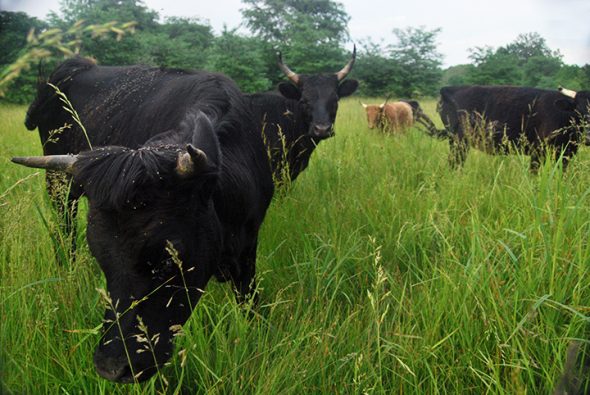 The behavior of cattle is intricate and nuanced if given time to observe them.

Jon Paul and Megan Rion’s foray into the world of cattle farming began around a dozen years ago when someone from Jon’s church gifted him a couple Dexter cows, which is a breed suited for grass feeding. Grass-fed beef is supposedly much higher in important nutrients such as omega-3s and 6s. The herd has grown over the years, and now about forty-three cows, calves, and a few bulls meander up and down the fields and pastures. Jon and Megan grass-feed the cows from birth. They also sell the manure, which can be quite valuable, at the Dorothy Lane Market.

After asking Jon and Megan some questions, they allowed me access to the back field on their property to come and go as I pleased to observe the cattle. Megan was particularly interested in how a herd that included some bulls (most do not) would behave differently from standard herds. Jon suggested observing the cows either during the morning or the evening, when it wasn’t so hot, otherwise they would just be sitting in the shade. He encouraged me to really spend time with them, and I did. When asked how they thought the cows perceived them, the farmers, Jon stated “we’re part of the herd.” 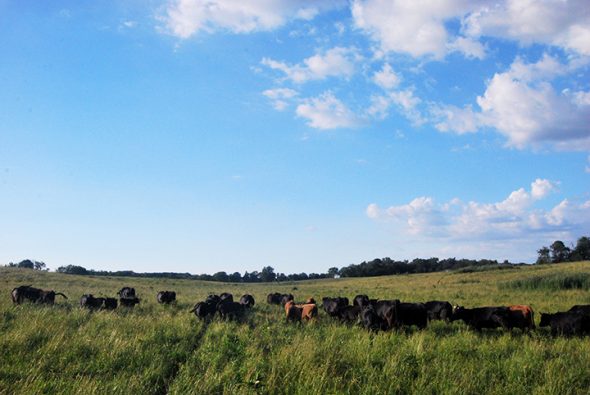 A herd of cattle make their way across the field.

Over the next couple of weeks, I periodically made my way down to where the cows grazed. 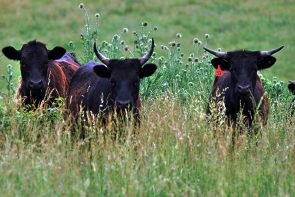 Cautious cattle during my initial approach of the heard.

It took a substantial amount of bravery (coming from who knows where) to initially approach these large horned beasts. Would they charge me? They had a number of young calves and Jon and Megan said that when they perceive a threat, they circle around the young to protect them. No such circle formed as I inched closer to them and I took it as a sign that they did not see me as a predator. Also, if other humans had been tending to them over the years, they could probably tell I wasn’t a wolf that would gobble their infants. Occasionally, if I got too close, a stomp or a snort would signal for me to take a step back. 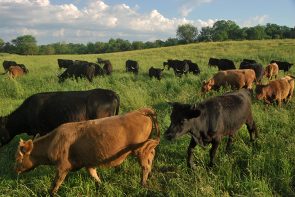 The cows move around the pasture.

I could not tell who was the “leader” or “alpha” cow/bull of the heard. Indeed, it never really became clear over the weeks whether or not such a leader existed. They moved together, like a small community, keeping to the shade when they could and constantly grazing. They would shove each other as motivation to keep walking, but never a single leader to move them all. Sometimes they split into “sub-groups” with the mothers tending to the calves. They noticeably became more spread out later in the day. 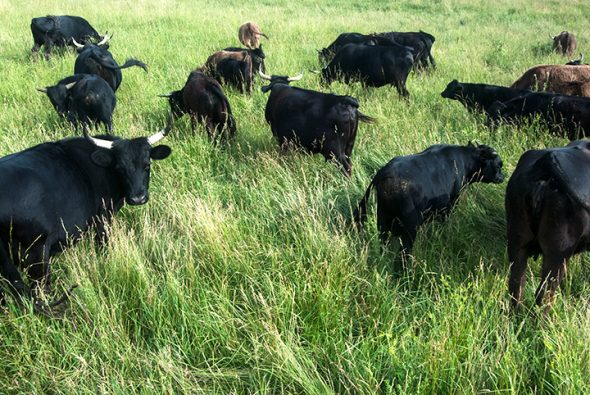 The cows usually stay together, spreading out as the day progresses. 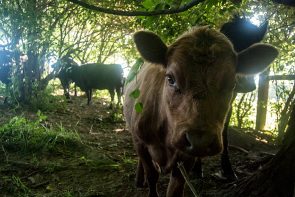 The cows take refuge from the heat under a canopy of honeysuckle.

When not scanning the ground for patches of green, they mostly kept to the shade. One evening I discovered the whole herd grouped under a canopy of honeysuckle, scratching their noses against the bark and urinating frequently. I seemed to have discovered their “bathroom”and made a note to not spend much more time in that area.

After the initial and tense “introduction”, the cows seemed to accept me and let me walk with them. There were times where it felt like the cows were actually following my lead, as if I had discovered the best patch of clover to munch on. It could have possibly just been my ego getting the better of me though. 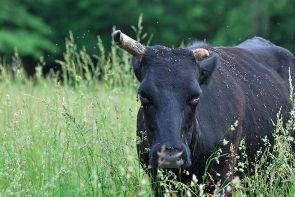 The cattle are generally not aggressive but some show signs of battle.

Initially, the cows vocalized quite a bit, mooing and bellowing constantly to who knows what out in the distance. Calling to another herd? Warning predators to stay away? It was unclear to me what their calls meant, as they were not directed to each other but out into the distance. The moos eventually dissipated the more I visited so who knows, maybe the cows were letting another herd know that I was “theirs” and to stay away from me, that they had claimed me. That’s kind of a stretch though. Jon Paul told me sometimes young bulls will vocalize to compete with other bulls for females. There are usually no full-blown physical fights but I noticed a few broken horns among the herd.

The bulls that are in the herd, according to Jon, are castrated, and it does change their behavior substantially and even their appearance. It was very difficult to tell who was a bull and who was a cow based on behavior alone. Some of the biggest sets of horns belonged to the cows. A lack of testosterone due to castration made the bulls less aggressive and dominant and more like the cows. Megan’s question seemed to be answered – due to castration, the addition of bulls did not seem to change much of the herd’s behavior. Jon noted that when a bull (castrated or not) is courting a female, there is a certain gentleness and tenderness that overtakes him.

As for the caring for the calves, responsibility is divvied up between the mothers 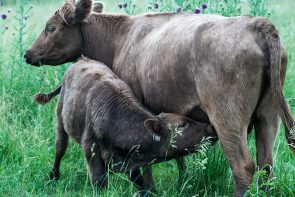 The female cows usually care for the babies, with some help from older cows.

and “grandmothers” in the herd. Jon and Megan bottle-fed a calf from birth and they note that now it is distinctly lower on the “totem pole” than calves raised by their own. The cattle seem to ostracize those that they see as strangers to the herd, which is what made my interactions with them all the more special, as they eventually accepted me into their numbers. When I walked with them, a powerful feeling of belonging and being “one” with the herd overcame me. I felt like I was flowing with them. Every time I took off, I felt a sadness, like I was abandoning them, and could distinctly feel different from when I was with them to when I left. 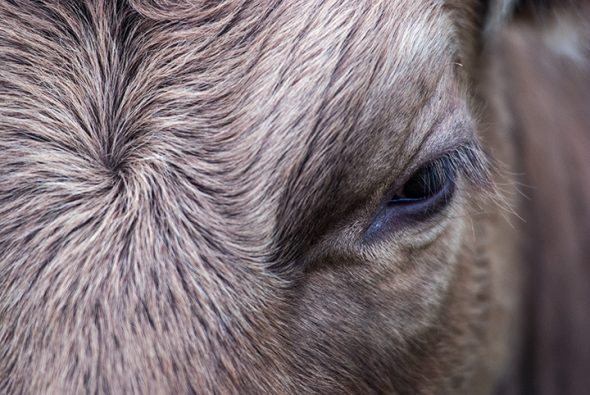 A baby calf ponders the universe.

Jon Paul and Megan’s farm is progressive and unique in it’s techniques, organic approach, and architecture. Jon is also interested in what he considers to be “biodynamic farming”, an alternative approach to agriculture that incorporates spiritual dynamics to the process of farming. In biodynamics, the cow is seen as the ultimate receptacle. It absorbs everything around it, even the universe, and reflects it back at the world and the entities in it. Maybe a far-fetched concept, but if you were to immerse yourself in the cow’s world and see their uniqueness for what it is, you might believe in such things.