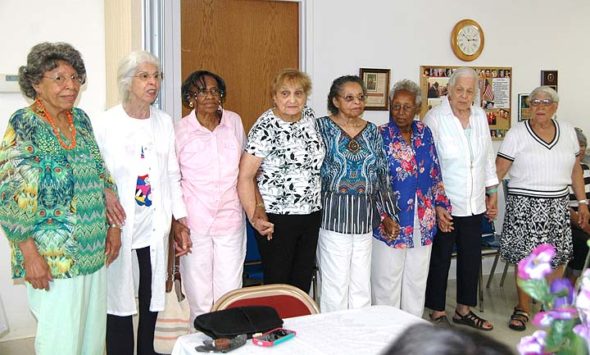 Love and pride of community, church, family, friendship and, not least of all, country — the Victorettes of Yellow Springs brought all these together for a group of young African-American women in their teens and early 20s during the final months of World War II.

Founded in the spring of 1944 by Dorothy Perry Boyce, a recent college graduate whose husband, Lyonel, was stationed overseas, the Victorettes represented a war-time, home-front effort that engaged local young women in service while supporting their husbands, boyfriends, brothers and other male friends and family fighting in the war.

The group’s main activity was singing and presenting concerts and theatrical presentations in the area. Their repertoire included show tunes, classic songs and patriotic numbers. They also sent Christmas cards to the troops and organized youth dances at the Glen Pavilion, among other activities.

Their time together was relatively brief, however, as the group disbanded in 1946 when Boyce moved to Cleveland with her husband after his return to the States.

Still, deep bonds formed within the group remained strong throughout the years and decades that followed. And more than 70 years later, their affection for each other was in clear evidence this past Labor Day, when eight of the original members — including founder Boyce — were joined by about 50 friends and relatives for a Victorette reunion at Central Chapel A.M.E. Church.

The afternoon gathering was filled with reminiscing — and teasing. A particular source of banter for the women now in their late 80s and early 90s was the question of age — who was older and younger than whom. Singing ability was another point of good-natured “contention.”

Boyce, who at 95 now lives with her elder son, Wendell, in Beavercreek, where she “still plays her organ,” had only praise for her former singers. “They were great performers,” she said.

Victorette Dorothy Mundy Allen gave all credit to Boyce. “She was wonderful,” Allen said. “She had patience. And she kept pushing us.”

Mary Hull Bowers, who came in from Sacramento for the gathering, agreed. “I don’t think Dorothy (Boyce) realized what a value she was to our lives.”

The group took time to remember the members who have died, several of whom had family members on hand for the celebration. “We must not forget them,” said Ford, who listed the “six who have gone before: Clara Jane Cordell Berry, Barbara Hamilton Davis, Geneva Benton Gudgel, Maxine Pritchett Jones, Charlotte Adams Jordan and Naomi Adams McKee. … We want to think of them and their families.”

The importance of being a Victorette was reflected in many of the late members’ obituaries, where their participation was proudly cited among other life achievements.

Younger family members also saw significance in being a Victorette, not only for the women themselves, but also in their own lives. “You gave us a foundation of culture,” Karen McKee, daughter of the late Naomi McKee, told the gathered eight.

Karen McKee and Sharon Perry, the daughter-in-law of Marie Adams Perry Payton and niece of Dorothy Perry Boyce, organized the reunion with the support of Central Chapel. This is the third year the pair has put the event together, after previous reunion organizer Phyllis Lawson Jackson told them she was ready to pass the torch along. The first reunion of the group was held in 1998 at Boyce’s home.

While many of the loved ones in attendance for this year’s event live in the village, a good number came in from across the country. Oregon, California, Texas, Wisconsin and Virginia were some of the originating states named by family members.

The tone of the day was celebratory, and reminiscences were happy. The fact that the women, as black Americans, had lived through often turbulent and difficult times was a given, and rarely noted. Bowers urged the gathering, however, to remember the sacrifices of the older generations. “We forget the sacrifices, the obstacles,” she said. “We must honor them. We must pay tribute to the ones who were before us.”

“My father was a deacon at the Baptist church, but when I became a teenager, everything was happening at the [A.M.E.] church,” Newman said.

Newman said one of the highlights of performing with the Victorettes was singing “for Eleanor Roosevelt when she was here.”

A typical concert would feature the young women wearing long gowns, standing in the formation of their signature “V.” “We had a song for every branch of the service,” Payton said. And their original theme song featured a tribute to all the armed services.

Singing that theme song was how the women concluded the Labor Day gathering. Before saying their goodbyes, the crowd moved into the church’s sanctuary, where Boyce took her place at the piano one more time, and the other seven formed a “V.” “We’re the Victorettes,” they sang. Family members sitting in the pews helped filled in some forgotten words. “I’ve heard this song my whole life,” one Perry son said. The love and pride that formed the group in 1944 were still present.