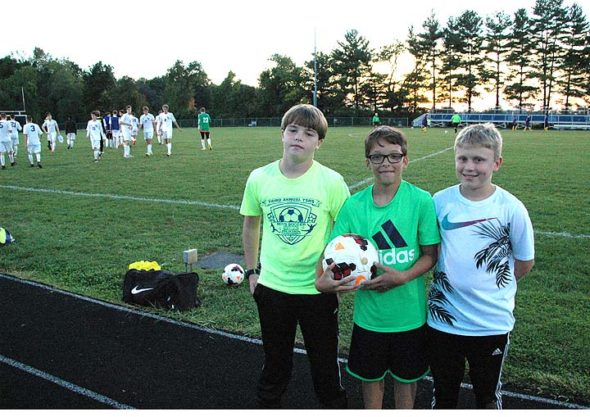 Ball boys Jason Knemeyer, Eli Eyrich and Josh Clark stood at attention at the Bulldogs game against the Columbus International Lions. The ball boys were tasked with patrolling the perimeter of the game and throwing balls to the players or referees when it was needed. They also filled this reporter in on the strategy of the game, which the Bulldogs won 7–1. (Photo by Dylan Taylor-Lehman)

At last week’s Bulldogs boys soccer game against the Columbus International Lions, ball boys Jason Knemeyer and Eli Eyrich, both 12, explained what might be going through a player’s mind midgame, based on their own experience playing on a local club soccer team. Eyrich said he notices which feet players play with and the overall strategy of the opposing team. He also notices the attitudes of the players on the opposite team — if he can tell someone is coming into the game with a bad attitude, he knows how that attitude will affect his performance on the field.

They gazed patiently out at the high school players, comfortable in their knowledge that that will be them someday out on the high school field. But they were also paying close attention to the game because they were tasked with “keeping it going,” as Eyrich put it. Eyrich and Knemeyer were two of the seven ballboys and one ballgirl who patrolled the perimeter of the game and threw a ball to the players or referees when it was needed. Two ballboys were assigned to the length of the field, two on each side, while one patrolled behind each goal. They tend to stay in their assigned spots, but can also adjust if the action of the game brings it consistently to one side.

Eyrich said they have to be quick on their feet in order to keep the action moving, and to not get hit with the ball. He makes sure he stays on the track around the field so he has enough time to react to what’s coming toward him, he said. Collisions among ballboys and players are practically nonexistent though, Knemeyer said, as anyone playing the game at this level probably knows what he or she is doing.

Both Knemeyer and Eyrich have brothers on the Bulldog team, and both currently play on the same club soccer team, as do the five other ballboys, including Knemeyer’s twin brother Ethan. (“Soccer runs in the family,” he said.) They are looking forward to playing soccer in middle school and high school. In fact, Eyrich said, he’ll be able to play on the same team as his brother for a year if he makes the team when he is a freshman.

Yellow Springs ultimately triumphed over the Columbus International Lions, winning the match 7–1. The victory is one in a string of dominant wins, as the Bulldogs shut out Granville Christian Academy 6–0 on Oct. 7, and Emmanuel Christian 12–0 the day before.

The Bulldogs’ Oct. 4 game against Troy Christian was as intense as a match could get. The Bulldogs were definitely out for revenge after the Eagles won in five sets on their home court three weeks ago. But, more importantly, there was a three-way tie for first place in the Metro Buckeye Conference between Yellow Springs, Troy Christian and Emmanuel Christian, and the Oct. 4 game was crucial to the contest.

The first match saw the Bulldogs take an early lead with great serving by junior Payden Kegley, who served seven straight points, but the Eagles fought back to pull within one point at the 20–19 mark. Yellow Springs finished the first set by a slim margin of two.

The second set proved to be a much closer game, with both teams trading points back and forth until senior Kasey Linkhart went back to pick on the Eagles’ weak spots. Yellow Springs once again took a 20–19 one-point lead. After a few sideouts by each team, Kegley again took over serving and racked up three straight points to give the Bulldogs the win.

The third set was another hard-fought battle with no team really taking control of the game until the very end, in which the Eagles were able to pull out the win. The fourth set saw the Eagles putting up another good fight to keep the game even. The two teams exchanged side outs, tying the score at 22–22.

The Bulldogs only needed to side out to win, but the Eagles were able to get their groove back and secure the win. Yellow Springs was determined to finish this match off in their favor. The cheers of the Bulldog’s Dog Pound, players, parents and family members helped the Bulldogs come out fierce — they took the lead early and did not look back. The Bulldogs served, hit and blocked their opponents into oblivion. Sophomore Alex Ronnebaum put up one of her five blocks in the set to shut down the Eagles giving the Bulldogs a 14-9 lead. The Eagles’ last serve went long, giving match point to the Bulldogs. Ending scores for the match were 25–23, 25–23, 21–25, 26–28, 15–10.

“This was a great match!” exclaimed coach Christine Linkhart. “My team was really fired up and they played so well. I can’t give a single player credit for the win — as always, a team effort.”

With the victory over Troy Christian, the Bulldogs set their eyes on Emmanuel Christian. Yellow Springs knew this was also a must-win game and they prepared accordingly. However, the Lions knew this too, and the ECA fan section was very loud and excited. This worked in the Lions’ favor for the first game as the Bulldogs couldn’t hear one another call for the ball, giving the Lions the first set. The second set belonged to the Bulldogs, as they found their groove and began to play the way they had played all season.

In the third set, Yellow Springs was able to maintain control of the game despite a late game serving run by Emmanuel. With the match now sitting at 1-2 in favor of the Bulldogs, the Lions came out hard in the fourth set to secure the win, which forced the match to five sets. Though the Bulldogs didn’t have nearly as many fans as the Lions, every one of them was on their feet cheering the team on to victory.

The fifth set was by far the most exciting game of the evening. The Lions’ strongest server went on a run early in the game giving the Lions a 3-9 lead, but the Bulldogs would just not give up. With unbelievable digging by Kegley and junior Elle Peifer and senior Elizabeth Smith earning three more points for the Bulldogs, the score was now 11–12. Tyler Linkhart served up some great balls, which Emmanuel could only try to tip. At this point, Yellow Springs knew they had the momentum and they capitalized on it. The Bulldogs brought the score to the match point with a huge block by Ronnebaum that caused the ball to go straight down on the Lions’ court. In an amazing come-from-behind victory, the Bulldogs won the match 18–25, 25–20, 25–23, 17–25, 15–13.

The Bulldogs now sit all alone in first place of the Metro Buckeye Conference with a record of 13–4 (7–1 in the conference), with only two more conference games left. The last regular season game/Senior Night is on Thursday, Oct. 13, and the Bulldogs’ first tournament game will be Saturday, Oct. 15, at Troy High School.

On Oct. 4, the JV lady Bulldogs fell short in three sets while hosting Troy Christian. Troy came out strong and took a seven-point lead in the first set. The Bulldogs worked to catch up, but fell short losing to Troy 25–20. The second set was neck and neck until the Bulldogs pulled ahead to score seven points in a row. They never gave up the lead and won the second set 25–19. The third set was close, but Troy pulled ahead and won 25–19. Junior Raven James, with 12 digs, led the defensive effort. Sophomore Meryam Raissouni contributed 6 digs and 3 aces.

The JV lady Bulldogs traveled to Emmanuel Christian on Oct. 6. The Bulldogs played an outstanding match, winning in two sets 25–18 and 25–23. Junior Ayanna Madison had an impressive 8 digs, 4 kills and 4 blocks while junior Nia Stewart offered up 12 assists. Sophomore Kayla Brown contributed 6 digs, 2 aces, 4 kills and 5 assists, and freshman Olivia Snoddy had 8 digs and 2 aces in the victory.