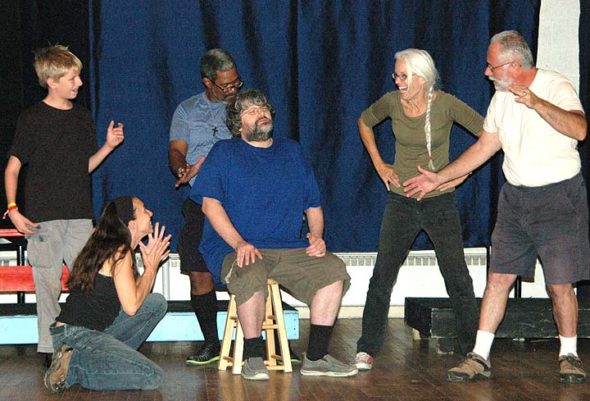 The auditorium of First Presbyterian Church was echoing with strange howls and exclamations last week, as a klatch of “carnival freaks” formed a circle and wailed around two adolescent friends. It was a strange sight to behold, even before costumes and sets were added to the scene.

The surreal scene was in fact a rehearsal of the Yellow Springs Theater Company’s fall production, a staging of Ray Bradbury’s “Something Wicked This Way Comes.” The play, adapted by the author from a novel of the same name, involves a mysterious carnival that alights on a small Midwestern town every 60 years, and the phantasmagoric happenings that result. Two kids get drawn to the carnival and have to figure everything out, and it was these two characters — played by Luka Sage-Frabotta and Leif Walters — who were being hounded by the stick-wielding members of the carnival.

The play is just in time for the eeriest of seasons, said Miriam Eckenrode Saari, the play’s director. The play includes characters such as Mr. Dark, the Carnival’s ringleader, who has tattoos of souls he’s collected, a lightning rod salesman and a sightless character called the Dust Witch.

The play features a number of odd locations and weird characters, an appealing feature for the actors involved. Many people have jumped at the chance to be denizens of the play’s dark carnival, said Eckenrode Saari. Ellen Ballerene, who plays the Dust Witch, has been involved with YSTC from the beginning, but has never had a chance to play a villain. The play provides a unique opportunity to indulge one’s dark side, she said.

“But my character also has a lot of dimension. She’s interesting because she doesn’t necessarily want to be evil, but she does what she has to do to survive,” Ballerene said.

It’s also been great to see the carnival freaks come together and act as one creepy body, she added.

The YSTC sometimes mounts productions featuring only members of the company, but “Something Wicked,” like this summer’s version of “Much Ado About Nothing,” was open to public auditions. As a result, the production features seasoned professionals and newcomers of all ages. The play features around 20 actors, a quarter of which are kids. Sage-Frabotta has acted before, while Walters is now trying his hand.

The mix of experience has been both fun and challenging, Eckenrode Saari said. People who have acted in theater before know shorthand directions that keep rehearsals running smoothly, while those directions don’t necessarily translate to 11-year-old boys, she said. However, those with more experience can impart their wisdom to newer actors. The two leads in the play, Sage-Frabotta and Walters, have different levels of acting experience, she said, but they have learned to be dragged and fall on stage in a consistent and believable manner. They’ve learned just how choreographed each step in a production is, as well as learning the process by which actors master the scene: an actor learns a line, which tells him where he’s going, which inspires the next line. Seeing an actor experience that sense of discovery is very rewarding, Eckenrode Saari said.

Yellow Springs resident and actor Kathy Buck has been in a few productions before “Something Wicked” and occasionally donned a costume for special events when she was a librarian in Xenia, and she said she’s had a lot of fun working with the kids in the cast.

“You learn a lot watching kids learn their lines so quickly,” Buck said.

The production has also drawn in young adults. Colton Pitstick, who plays the central villain Mr. Dark, recently graduated from Wittenberg with a degree in theater and English. He saw an audition notice for the piece and jumped at the chance.

“From Day One, it’s been very easy to work with everyone,” Pitstick said. “The cast and crew have made me feel very welcomed.”

The production is also Eckenrode Saari’s first foray into directing, aside from directing a 10-minute play as part of YSTC’s repertoire. She has been involved with YSTC since it was founded and said that YSTC’s Lorrie Sparrow-Knapp was pushing her to take a shot at directing. Eckenrode Saari chose “Something Wicked” as her debut production. She was in a college production of the play 25 years ago, and appreciated its scary but accessible nature. The themes in the play seem relevant in today’s social climate as well, she said. The carnival preys on people’s fear and insecurity and uses it against the residents to further its own diabolical ends. Not unlike a certain political party, she said, declining to specify which one.

One of the biggest challenges of putting on “Something Wicked” are the elaborate stage changes, according to Eckenrode Saari. Some of the staging was “impossible,” she said, as Bradbury seemed to have mistaken the stage for film. The play piece requires no less than eight different sets and only a minimal amount of time to change them.

In order to accommodate these changes, stage manager and lighting designer Amy Walmsley got creative with lighting and staging. Members of the carnival will enter from behind the audience, while lighting on different areas of the stage will convey the different homes and settings particular to certain characters.

“The actual stage decoration is minimal,” Eckenrode Saari said. “Well, there’s an electric chair, but that doesn’t come in until later.”

The pace of preparations and rehearsals is picking up as opening night draws near. Given the changing locations in which they rehearse, the group hasn’t yet been able to rehearse with props or lights. The next week will bring rehearsals every night, and some one-on-one work with different characters. But the group is one step ahead of the game, noted Eckenrode Saari: they often don’t do a start-to-finish run-though of the play until “tech week” (when all the props and lights are in place), but they’ve done a few complete readings already.

“The theater gods have been very kind to us,” she said. “There’s always a set of disasters that accompany any production — we’ve had a bunch happen but they’ve been resolved.”

Whether it’s an entity like Mr. Dark that has blessed the production or the workings of a less sinister being, the show is going to be a unique selection in YSTC’s repertoire.

“The large ensemble cast has been a lot of fun to work with,” Eckenrode Saari said. “The actors have really been transforming themselves.”