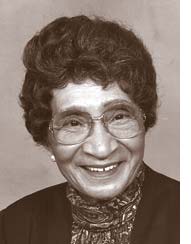 Margaret La Vern Wright Earl Cummings, was born on Sept. 28, 1916, in Birmingham, Ala. She was the second child of Rufus and Alice (Wilhite) Wright. Margaret’s father worked on the L & N Railroad; her mother was a homemaker, a seamstress and an occasional wet nurse for mothers. The family later moved to Hartselle, Ala., when Margaret was a toddler; she attended school there. As an adult, Margaret later returned to Birmingham and remained there until 2000. After becoming ill while visiting her daughter, Alyce Marie Earl-Jenkins, Margaret spent her remaining years in Yellow Springs.

She was preceded in death by her parents, brothers and husbands, Arthur F. Earl and Edmond Cummings. Margaret enjoyed the love, friendship, and attention showered upon her by five brothers, D.J., James, Ezell, George, and Leo Wright.

As a child, Margaret grew up in Mt. Pleasant C.M.E. Church in Hartselle, Ala., where she was known for her beautiful voice. She later became a faithful member of St. John A.M.E. Church in Birmingham for 42 years. At St. John, she served on the Usher Board and as second vice president of the General Missionary Society. She also spent 13 years as president of the St. John Lay Organization and seven years as first vice president of the North Alabama Lay Conference. While at the helm of the church Lay Organization, Margaret helped the group establish St. John’s Sweet Shop and Clothes Closet for church and community members. Affectionately known as “Mrs. Grits,” Margaret was also responsible for the church kitchen ministry for many years. She co-chaired the Annual Women’s Day Observance in 1987 and was one of the committee chairs who organized the Church’s successful Count Basie Band Fundraiser.

After arriving in Yellow Springs in 2000 and visiting various churches, Margaret chose to join Central Chapel A.M.E. Church because it reminded her of her small family church in Hartselle. She began visiting Yellow Springs in the ‘60s and developed many memorable friendships that sustained her until she left us.

In her early years, Margaret worked as a domestic for the Adkins and Leftwich families. She later worked 25 years with the Afro-American Insurance Company where she was recognized as an outstanding insurance agent, and then worked 10 years and retired from the Alabama Positive Maturity Senior Program where she was employed as a health care companion. After retirement, she became a courier for the Alabama Red Cross. She enjoyed driving fast on Alabama’s interstate highways without fear of receiving a speeding ticket because she was transporting plasma. Margaret was a self-employed caterer throughout her employment years and during retirement.

Margaret and her husband, Edmond, were actively involved in the Alabama Christian Movement for Human Rights founded by Rev. Fred Shuttleworth. Her primary responsibility was voter registration and teaching people how to use the voting machine, while Edmond focused on transportation, picketing and guarding Rev. Shuttleworth’s home and church. Their activities caught the attention of the Ku Klux Klan who began monitoring their home and activities, causing neighbors to become “look-outs” for them. She was a member of Club Les Dames Charmantes for over 40 years where she served as president, business manager and chaplain; she was also member of the Neighborhood Outreach Organization.

Margaret decided to become a volunteer companion to assist church members and friends who needed help with shopping and transportation or simply visit those who were sick and shut-in. She enjoyed attending professional baseball games, playing cards, fishing, gardening, cooking and dancing — she could even do the “bow wow.” After the onset of health problems limited her mobility. Mama’s favorite pastimes became dominoes, jigsaw puzzles, reading, staying abreast of politics and cheering Tiger Woods to victory.

Services will be held on Saturday, Jan. 7, at Central Chapel A.M.E Church, located at 411 S. High St. in Yellow Springs. Visitation and brunch will be at 10 a.m. until time of service at 11:30 a.m., with Pastor Dwight Smith officiating and Rev. Brenda Freeman with reflections. Interment will follow at Glen Forest Cemetery.