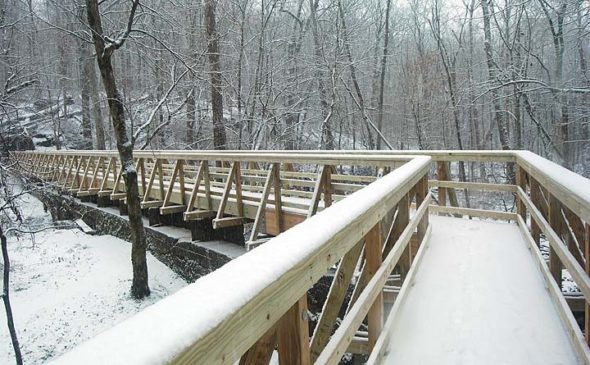 A stately new bridge spans the dam in Glen Helen. Construction on the bridge was completed in December after nearly two years of hurdles and work. The bridge allows for easier hiking and harkens back to the Glen as it appeared more than 100 years ago. (Photo by Aaron Zaremsky)

While natural growth in Glen Helen is slow and steady, observable over years and decades, a prominent new landmark in the Glen popped up over the course of only a few weeks. A massive new bridge was recently constructed across the ruins of the dam, allowing for easier hiking and harkening back to the way the Glen appeared more than 100 years ago. The bridge references walkways that have long since washed away and directs visitors to trails similar to those that led to those old pathways.

The bridge was a much-needed addition to the Glen, said Nick Boutis, director of the Glen Helen Ecology Institute. Projects like the bridge help to draw the 100,000 annual visitors to the preserve, he said, while at the same time minimizing human impact by providing an authorized place to cross the stream. Importantly, the bridge also makes the Glen easier to visit for folks with limited mobility, he said.

But the simplicity of walking across the dam belies the difficulty of (literally) getting the project off the ground. According to everyone involved with the project, it was a monumental undertaking with myriad requirements and occasionally conflicting directives. The project had to go through some “fairly significant bureaucratic gauntlets,” said Boutis, who had to make sure no state or federal statutes were violated, which was especially tricky in an area with numerous waterways and protection by a conservation easement. 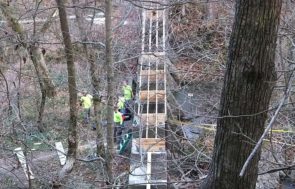 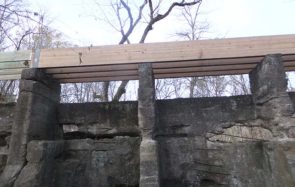 The new bridge in the process of being built. (Submitted photo)

The construction of the bridge was funded by a grant issued through the state’s Residential Trails program, which is administered through the Ohio Department of Natural Resources and allocated funds from the federal government for use in projects involving alternate modes of transportation, Boutis said. The project was also funded by the Yellow Springs Community Foundation and through the memberships and donations of members of the Glen Helen Association.

The bridge has been planned since even before the previous pathway across the dam was washed away in early 2014.

Floods are an occasional peril in the Glen, and they typically wash away any bridges and fences in the path of the overflowing waters. While most major flooding has been consigned to the early decades of last century, May 2014 brought a sudden flash flood that not only washed away foot bridges but opened up a chasm among the remains of the dam. Five inches of rain fell in only a few hours, Boutis said, a flood that his crew referred to as of “historic proportions.”

“People would be hiking and come across a section of the bridge out in the middle of the woods,” said George Bieri, Glen Helen’s land manager.

After the flood, crossing the dam became a dangerous undertaking, and bridges further down the valley were gone. Like the unstoppable wandering of a wild river, visitors to the Glen forged their own paths across the streams. Visitors began climbing across the ruins of the dam, or crossing the stream elsewhere in the Glen. Paths were widened as people developed new trails that led to the remains of the dam.

The project came close to launching a few times, as the Glen applied for a similar grant in 2012 but the application was ultimately denied. A new bridge grant was completed in early 2014 and submitted to the state, Bieri said, but in the meantime, recovering from “grant fatigue,” the Glen undertook other projects before beginning the application process again.

An entire valley’s worth of honeysuckle was removed south of the dam and a crew from Kentucky calling themselves the Torpedo Brothers were called in to use explosives to remove an enormous rock that stood in the way of the future bridge.

The most recent grant was finished just in the nick of time, as the major flood event of May 2014 happened a few months later and underscored the need for the bridge. This time, the grant was approved. The Glen had until Jan. 1 of 2017 to get the project completed.

In order to start construction, the Glen had to get engineering plans approved by the state and had to ensure that the plans abided by a number of other considerations. For example, Boutis said, the State Historical Commission said that the bridge had to go on top of the dam instead of alongside it, while the state-protected stream meant that no part of the bridge could be anchored in the middle of the stream, nor could anybody physically be in the waters during construction.

Drawing up workable plans was a lengthy process in its own right. A series of engineers developed plans that frequently had to be revised, and this back-and-forth took the better part of a year and a half. By mid-2016, there were still no blueprints for the bridge or an engineer to create them. Not even into the planning stages, the Glen was coming close to losing the grant.

Fortunately Yellow Springs resident Jerry Papania and his colleague Tim McCrate stepped up to the plate, volunteering their time to design a bridge that took into account all of the parameters demanded by the project. Papania, a civil engineer by trade, was familiar with engineering projects in the Glen, as he has been helping design and build things there since 1982, including the restoration of some old bridges as leader of a local Boy Scout troop and the design of the flight cage behind the raptor center that is used to rehabilitate injured birds.

Fortunately, Papania already had a design for a bridge across the dam in mind, as he had been talking with Bieri “for years” about the project. According to Papania, the project was “kind of fun” and the design “logical.” He worked with Glen Helen’s assistant land manager Ben Silliman, who took over managing the bridge project, to flesh out the design and implement the plans.

“There were a lot of details to work out, but it wasn’t a complicated design,” he said modestly. “You just have to have knowledge of structural engineering.”

Another colleague helped draft CAD plans for the project. Plans for the finished bridge included elements that looked not unlike an old wooden rollercoaster, Boutis noted, thanks to McCrate’s experience designing rollercoasters.

Finally, once the plans were approved, the project had to be bid out to area construction crews. By the time a Casstown, Ohio, construction group named Outdoor Enterprise won the bid, there were only two months left until the deadline.

But even once the builders were hired, the project didn’t necessarily get any easier. The dam sits at the bottom of a valley, both sides of which are steep inclines. It was not an ideal situation, Bieri said, as construction of the bridge required 40-foot-long laminated wooden beams that weighed almost 1,000 pounds each. Trying to get them down to the construction site and hoist them in place, while staying out of the stream and minimizing the use of heavy machinery, was a task that was almost comical in its enormity.

However, this “insane” challenge was solved in an ingenious way, Bieri said. The builders constructed a boom tower on the top of the eastern ridge and connected a zipline system down to the location of the bridge. The huge beams were attached to the line and guided into place.

The bridge was completed in mid-December and was opened with little fanfare. By the time the project was finished and the holidays were rolling around, Bieri said, the people at the Glen were too exhausted to throw a proper grand opening ceremony.

The finished bridge makes for a fairly visible presence in the Glen, which is something that Bieri worries might take visitors out of their zone of connecting with nature. Old buildings have previously been removed and brid 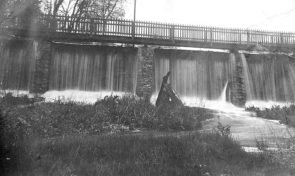 The original bridge across the dam circa 1900. (Photo courtesy of Scott Sanders, Antiochiana)

ges have been replaced with stepping stones because of similar concerns, Bieri said. However, there are many upsides to building the bridge, he said. The closing of the old path leading to the dam has minimized erosion while Boutis pointed out that the new bridge will “allow the ecology of the Glen floodplain to operate naturally.”

“Ecologically, it’s a win,” Bieri said, “even if it is a man-made object.”

Papania has visited the bridge a few times since it was completed and observed people enjoying the bridge, while Boutis said that he hopes to use the bridge “programmatically,” and envisions events such as a bird-watching fundraiser being hosted on the structure.

Additionally, Bieri noted, with the removal of the honeysuckle throughout the valley leading away from the bridge, visitors are afforded a view of the Glen that was previously clogged by the invasive species.

The size of the bridge — Bieri referenced the size of the bolts as an indicator of its hardiness — will likely ensure that it stays put for the next century, ideally weathering the occasional flood.

“Kudos and gratitude again to the engineers that helped us,” Boutis said.