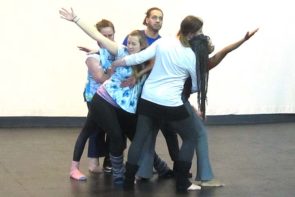 The annual Valerie Blackwell-Truitt Community Dance Concert will take place next Friday and Saturday, March 10 and 11, at 7:30 p.m. at the Antioch College Foundry Theater. (Submitted photo)

Locally based dancer Valerie Blackwell-Truitt might have become a professional singer. Growing up in a musical family, encouraged by her music-teacher mother, taking vocal lessons as a teen, and blessed with a strong soprano voice, she thought seriously about pursuing an operatic career.

She indeed loved — and continues to love -— singing. But dance is what called her.

While nervous anxiety has always accompanied solo vocal performances, stage fright vanishes when she steps on a stage in dance, she said. Even the hard work that goes into learning and creating dance gives her joy. She recently recalled with wistful longing the eight to 10 hours of daily practice as a college student in the dance program at Arizona State University.

“It was really hard, but that was so much fun,” she said. “It was so worth it to me — all the time in the studio, all the training.”

Her passion for the art of dance is what fuels her production of the annual Valerie Blackwell-Truitt Community Dance Concert, which returns Friday and Saturday, March 10 and 11, at the Foundry Theater on the Antioch College campus.

As a dancer with the Miami University-based One Nation Performance Ensemble from 1989-99, Blackwell-Truitt presented her first dance concert in Yellow Springs in 1993, when she brought the ensemble to town. Not long after, she presented the first event that would evolve into the annual community performance. The concerts continued, presented through the collaborative efforts of a host of local dancers and dance lovers even after Blackwell-Truitt moved to Colorado in 2009. She came back each year to participate, however, and became involved in the organizational side of the event again after returning to live here full time a couple of years ago. This year’s performance marks her first fully back in the artistic director’s and producer’s roles.

She said she’s thrilled to see how the concert has continued. This year’s program will feature about 15 dance pieces, with styles ranging from modern, to belly dance, to Bollywood/fusion, to folk dance, to athletic pole performance, she said.

More than 40 dancers will participate, with several performing in multiple pieces. The event is unique in that anyone called to dance is welcome, from newcomers to professionals with master’s degrees.

All ages are among their number as well. Two groups of children are preparing pieces. Lutz Warren is working with “The Littles,” 8–10 preschoolers who will perform to Frank Sinatra’s “Fly Me to the Moon.” And seven primary school students from Antioch School’s Younger Group have been working with retired Antioch College dance professor Dimi Reber to present a piece Friday night set to the poem “Disobedience” by A.A. Milne.

Other works include: Tricia Gelmini’s “The Light That Comes Through,” “a piece about finding and harnessing the light within us and sharing it with the people and world around us,” and Marybeth Wolf’s “Dance of Liberation,” in which the performers dance to “Pizzica Tarantata,” by Alessandra Belloni. The work is inspired by Italian folk dances “with roots as a healing curative dance for women who have been bitten by the mythical spider of oppression, repression and abuse.”

Blackwell-Truitt’s “To Humanity, At What Cost?” is set to the late pop star George Michael’s song “Mother’s Pride.” Her own son, Kyle Matthew Truitt, will accompany the dancers on drums, adding, according to the choreographer, “another layer of complexity to the music whose story is about children, husbands and brothers who go off to war and unfortunately do not return.”

The emotional content of the evening’s works run the gamut of the human experience — joy, pain, love, anger, fear, whimsy.

“I’m still amazed after all these years with the people who have come through the dance concert. Who had the drive, commitment — the need — to dance,” Blackwell-Truitt said. “Perhaps they want to be part of something bigger than themselves, or part of a community of like-minded creative individuals seeking opportunities for self-expression. Perhaps people want to try something new, to stretch themselves, get out of their comfort zones. Maybe participation in the Community Dance Concert is a way for them to do so.”

The 2017 concert is a joint presentation by Blackwell-Truitt’s Bej Na Productions and Antioch’s Foundry Theater. Performances March 10 and 11 start at 7:30 p.m. Admission is $10 for the general public and $8 for senior citizens, students and youth. Children younger than 8 and Antioch students will be admitted free of charge.