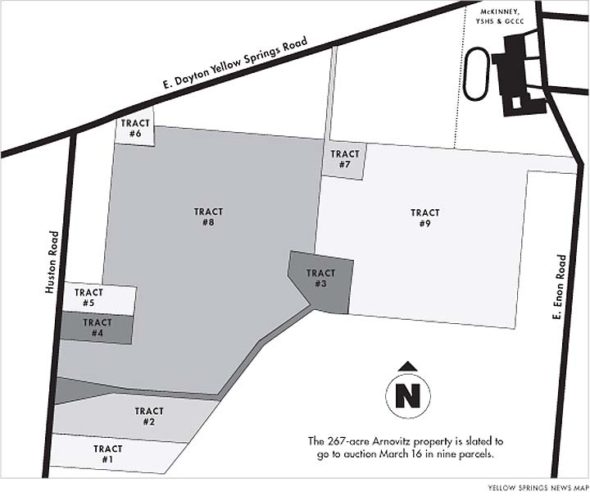 At Village Council’s Feb. 21 meeting, a villager and Village Council member urged villagers to come together in an effort to preserve farmland at risk of development on the western edge of Yellow Springs. At stake is a 267-acre parcel that will be auctioned on March 16.

“We can’t trust developers to have our town’s best interest at heart,” said Dawn Johnson, regarding the parcel of land now owned by the Arnovitz family, which is putting the land up for auction. “What makes our town special is its rural character. You can’t put that kind of development on the edge of town and expect the town to stay the same.”

The land is located just west of Yellow Springs, behind and slightly south of Yellow Springs High School (see map on page 5). While none of the land fronts on Dayton-Yellow Springs Road, it lies directly south of parcels owned by Max and Inge Lake and Rick and Mary Donahoe that do front on the road. The land has been divided into nine tracts for the auction, with several tracts fronting on Huston Road.

At the Council meeting, Tecumseh Land Trust Director Krista Magaw asked Council to contribute to TLT’s effort to help preserve the land, or at least the parcel that contains two tributaries of Jacoby Creek, which is a piece of the Jacoby greenbelt.

“The creek is the biggest priority for our board,” Magaw said.

The parcel that is of special interest to Tecumseh Land Trust is Tract 8, which contains 125 acres including the Jacoby Creek, along with woodlands around the creek.

Because it contains two tributaries of Jacoby Creek, the 125-acre tract is an especially important part of the Jacoby greenbelt, which the Village and the Miami Township Trustees have considered important for conservation since the 1970s, Magaw said in an interview on Monday.

However, she emphasized that TLT hopes that all of the Arnovitz land will be protected with conservation easements. Currently, the land is being farmed.

The land will be sold by auctioneer Ron Denney at 6 p.m. on Thursday, March 16. The auction will take place at the Hilton Garden Inn at 3520 Pentagon Blvd., Beavercreek.

The land has been owned for at least 50 years by the Arnovitz family, according to commercial realtor Matt Arnovitz in an interview Tuesday. The family has decided to sell because the land “no longer fits our portfolio,” Arnovitz said, since the family is involved neither in farming nor residential development, the most likely uses of the land.

Signs announcing the sale were put out just this week, and phones have been “ringing off the hook,” with people interested in the land, Arnovitz said. He stated that he’s received calls from both farmers and developers.

While any of the land could be developed for residential use, according to Arnovitz, the most attractive parcel for development is Tract 9, an 82.24-acre parcel with an access easement in place on East Enon Road, just adjacent to Yellow Springs High School. It is currently being farmed.

Arnovitz said he cannot speculate on the value of the land, which will vary according to its intended use. Area farmland goes for about $4,500 to $9,000 an acre, according to Magaw. However, the price would rise if the land is purchased for development, Arnovitz said.

Magaw said that TLT estimates that the purchase price could be between $1–$2 million. Currently, the Yellow Springs greenspace fund has a balance of $195,950. TLT is also looking into other sources of funding, including state and federal grants for conservation. Purchasing a conservation easement for the property would cost about $1,500 to $2,500 per acre, according to Magaw.

Council member Judith Hempfling also encouraged villagers to come together in a way similar to the successful effort to save Whitehall Farm, which was also at risk of development in 1999. At that time, the 940-acre Whitehall Farm, owned for decades by the Rankin family, was also put up for auction with little notice to the community. However, the community came together and raised about $1 million toward the purchase of conservation easements, and the Neuhardt family, who lived on the property, ended up buying the property with the help of the community investment, then selling it to farmers who, with the help of TLT, put conservation easements on the property.

“The Village will want to play a role, but it will take more than that,” Hempfling said. “If an effort like that [Whitehall] occurs, it will come from the citizens. With Whitehall, it was a handfull of citizens who got it going.”

Council agreed to meet with Magaw in an executive session to discuss real estate at its March 6 meeting. Council will also revisit the topic during its regular meeting.

Other items of Feb. 21 business will be included in the March 2 News.