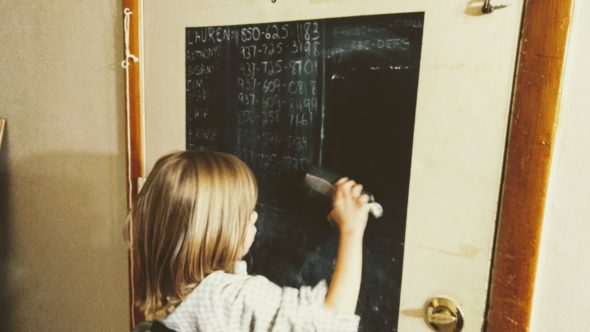 Lucy erases a whole part of her life. Whoa.

From the time I was 17 to around when I was 25, I kept a Livejournal — which was, in essence, a personal blog, but somehow even more self-indulgent. And because I indulge myself, I was recently reading through old entries — with plenty of cringe breaks — and came across this entry, one of the last ones I ever wrote:
“I spent this weekend layin’ around doing [my then-boyfriend, now-husband Anthony’s] freaking taxes. Last night he said, ‘You know, if you stick with me, you’re going to have to be in charge of all the business stuff.’ … My interpretation is that we will live happily for approximately three-and-a-half weeks before we spiral into chaos and end up attacking one another with flame-throwers. At least it will be epic.”
I’m happy to say that, nearly a decade later, no flames have been thrown, any chaos has been of the typical amount and yes, I am still in charge of all the business stuff.
A few months ago, I was in charge of our biggest business stuff to date: in late March, we bought our first house, right here in Yellow Springs.
We bought the house from my co-worker Suzanne and her husband, Lucas, through Home, Inc. During the closing process, which took several months, Suzanne and I would have a weekly tete-a-tete each Friday at the News office, keeping each other updated on paperwork, inspections, appraisals, etc. When the day finally came to close, Anthony and I sat around a table with Chris Hall and Emily Seibel at Home, Inc. and a representative from the title company. We passed around documents and all signed them in turn while our daughter Lucy sat at Emily’s desk and doodled with pens the title company rep had given her. I kept thinking, “Somehow I managed to convince these people to sell me a dang house. I am really nailing this business stuff.” We were presented with bread, wine, salt, chocolate, a photo of our house in 2000 with the volunteers who built it — and the keys.
It’s at this point that I should be writing a paean to our new-ish home, which is in full splendor now in late spring, what with its many breezy windows, airy kitchen, two porches and a choice back yard. (Just this week I bought a Slip ‘n’ Slide.) But there does seem to be something stuck in my metaphorical craw at the moment. Here it is:
Before we moved to our High Street home, my husband and I lived in the Twin Coach apartments for 8 years and 7 years, respectively. Our daughter Lucy spent her first few days of life in the Miami Valley Hospital, and after that, 310 Union Street, Apartment 102, was her first home.
I’m an adopter of that very human habit of ascribing significance, and occasionally sentience, to beloved objects and places. This predilection does extend to my blogging; in the past I’ve written not one, but two pieces for the YS News website about my relationships with cars — and I didn’t even live in those.
It wasn’t until the last day of packing and cleaning out our old apartment that I started to hear the curtains close on an act of life.  There was this rectangle of black chalkboard paint we added to the door, and Lucy was wiping it clean, erasing the phone numbers of friends and loved ones, notes, shopping lists and the accumulated chalk dust of almost 10 years.
Later that night, I removed a light switch cover from the hallway — the cover has Stephen Colbert’s picture on it, and I couldn’t leave it behind. Underneath the cover was a light switch-shaped love note from Anthony, which he’d secretly placed there several years ago one week when Lucy and I were out of town and he got restless and lonely and painted the hallway.
Last was the cleaning of Lucy’s bedroom, which we’d painted with waves and a blue sky in colors we painstakingly chose in the months leading to her birth. When we brought her home at two days old, she had her first bath in a tiny, plastic tub we’d taken from the hospital room — along with anything else that wasn’t nailed down — on the floor amidst those painted waves, and she was such a little thing it was impossible to imagine she’d ever need a room that big.
And yet there we were, having outgrown the only space we’d ever shared as a family.
Why was it suddenly hard to walk out of a place that we were more than ready to leave? Why does my car still, after these months, find its way to Union Street instead of High when I’m driving home? Why did my heart drop a few weeks ago when I saw someone else’s curtains in our old living room window?
It’s taken me a while to write this blog just because I’ve been trying to get at the marrow of this bone I’ve been picking with myself, which is this: there’s no such thing as permanent housing. Everybody moves out or gets evicted, one way or, you know, the other. Life necessitates movement, movement means change, and change, in its way, suggests endings — a certain type of finality.
I guess what I’m trying to say is that leaving my old home for my new one has made me face my own mortality.

Which I guess is kind of a lot of pressure to put on any type of dwelling, whether owned or rented.

When going through my old Livejournal entries, I noticed that I abruptly stopped writing in it in the late summer of 2009 — which, coincidentally, was when I moved into the Twin Coach in Yellow Springs. There were no sad posts about leaving my apartment in Lexington, Ky. which had been the place where I’d gotten to know and fallen in love with my future husband. There was no middle-of-the-night musing, no hand-wringing.

So perhaps, as I close the book on my long relationship with the Twin Coach — and say “thank you” to all the people we met there — I might take a digital leaf from the more than 1,500 posts (Oh My God) I made on my Livejournal from ages 17 to 25 and just, you know, get on with it. The best, most important things are with me wherever I go: my husband, my daughter and my Slip ‘n’ Slide. They are the biggest business stuff of my life — of which, by the way, I am in charge.