Last year, with a broken heart and nothing but $200 to console me, I wrote about the loss of my favorite car. And here I am, getting ready to write about cars again.

My best friend Cherie, an itinerant filmmaker, among other things, told me that she once shared a car at a film festival with an actor known for his role on Beverly Hills, 90210. The two of them got to talking about cars, and Cherie’s knowledge and enthusiasm on the subject was such that the actor in question admiringly referred to her as a “Motor Mama.”

This anecdote really has no purpose, aside from the comedy involved in the fact that Steve from 90210 once hit on my friend because of cars. I suppose I also mention it to point out the fact that, although I am now writing about cars for the second time in the history of this blog, I don’t actually know what a “Motor Mama” is, which means I am probably not one.

I am, however, a regular mama, and sometimes have to transport myself and my loved ones around in a vehicle equipped with a motor. For this reason, when that motor busted in Columbus last week, my partner Anthony and I realized that we were about to be forced to embark on a family milestone: buying a new car.

The first car that was ever mine was given to me by my mom and dad when I was 18. I don’t remember much about the process of buying that car. I know I went with my dad to the used car lot, but I have no idea what was said, how much it cost.  It was a boxy black Nissan, a 1993, nine years old at the time. Its seat covers were light blue crushed velvet, with a matching steering wheel cover. By God, it was a beauty.

I spent a lot of time in that car: I took it from home to work to school, of course, but I also recorded music in it, cut my hair in it, slept in it. I was a victim of theft for the first time in that car. I took it to college. I took it to Disney World. The gear shift used to freeze up on rainy days, and I’d sit in my car for 10, 15, 20 minutes, praying it would let up soon so I could get to class.

Truthfully, there was nothing particularly interesting or fun about driving this car. It was your standard automatic sedan, and sometimes overheated and shut off at stop lights. It occasionally smelled like stale corn chips for no discernible reason. But it was my first car. I probably don’t have to elaborate to anyone who’s ever owned a car what that really means. It took me to a lot of places, and it was mine. I named it “Chauncey.”

On Sunday, we bought the new car. It took about four hours, including a good hour of haggling time. We knew which car we’d leave with before we even came to the lot, and it turns out that exactly one of that car was in stock. We filled out the paperwork, ate as many of the provided complimentary snacks as we could while we waited, and then, all of a sudden, we were the owners of a brand new car. A Nissan. Black.

For the second time in my life, I was driving home in a new black Nissan. It didn’t feel quite the same this time. For one thing, this car isn’t mine. Like so many other things in my life, it’s not mine, but ours.

Sharing is a given when it comes to promising to stick with another human for your life; you share your time, your space, your food. Sometimes you share underpants, if you’re in a tight spot laundry-wise. If you have kids, you share that responsibility. You take turns sleeping in, making breakfast, saying “no” when the little one wants to watch How the Grinch Stole Christmas a ninth time on a March afternoon.

And you take turns driving the new, shiny car. You can’t take off in it for the weekend without consulting the other one first. You probably shouldn’t cut your hair in it. Hopefully you won’t be sleeping in it.

And, in this case, there’s a loud little person strapped into the back seat. She’s singing the word “Mama” to the tune of “Old McDonald” over and over. She reminds you that, though you used to be “Lauren,” free to run the roads ad nauseam in her little black Nissan, now you’re “Mama,” in an equally little black Nissan, trying to get home from Kroger before somebody poops. 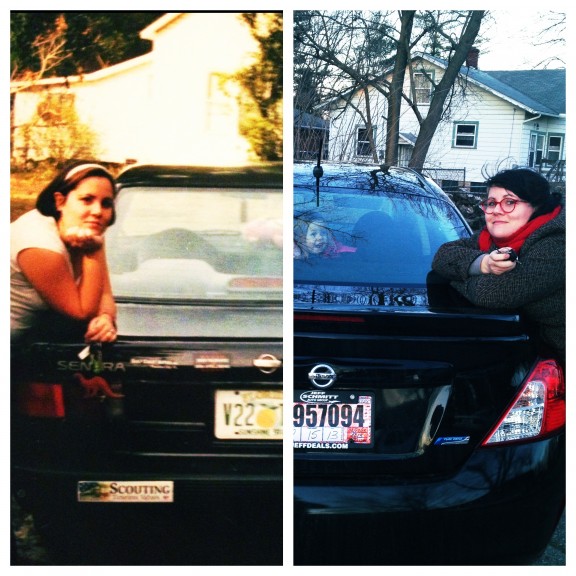