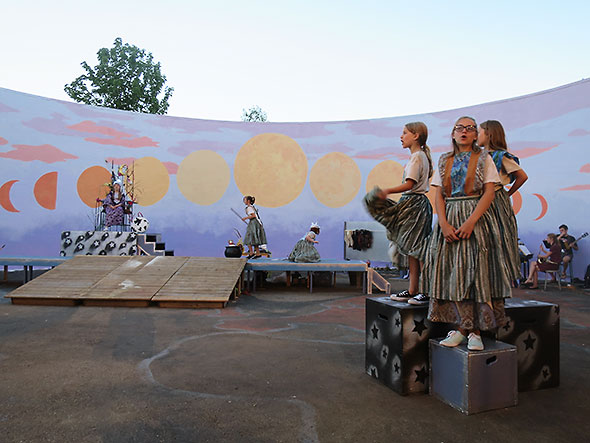 I watch my daughter on stage. She holds herself with a growing confidence that radiates like the sun. She raises her hands to her chest as if she feels the warmth of the words she sings. Dressed in full headdress, she raises her eyebrows to greet a handsome demigod who seeks her favor. It is a look, an expression full of promise.

My children have fallen hard for the stage. They are like me. I fell at the age of three. Dance captivated me, enthralled me, but theater has worked its magic too. Deep into literature by high school, I decided that the play was the thing and began picking up scripts to peruse.

Perhaps it’s how novels fill the page with high walls of words while plays dance upon the paper with more structure and blissfully more open space. Perhaps it is the intensity of those characters that plays turn their hot spotlight onto. A playwright focuses on dialogue—my particular social weakness—and tasks us to decipher the layered meaning hidden within the codes actors exchange. Some playwright such as George Bernard Shaw and Tennessee Williams dictate stage directions; all knowing and attentive, these authors hold my hand throughout the storytelling. Other authors are more indulgent. They leave the action to the reader’s imagination. Shakespeare puts his plays completely into verse interrupting the stream of dialogue only to note where characters enter and exeunt.

My husband Jeremy and I are in rehearsal for Julius Caesar, Shakespeare’s historical tragedy that records the fall of Rome as a Republic. Jeremy and I open the play in a short but explosive scene between two Senators and two Citizens. The chasm between these people already yawns wide. The play merely catches the moment where everything falls irrevocably into pieces. Lori Sparrow-Knapp directs her second turn of Shakespeare under the Stars…this year at Mills Lawn…with a mastery that matches and even surpasses her excellent rendition of the bard’s comedy Much Ado About Nothing last year.

The strength of a play turns not just on the author’s script but on its production. Through its restraint, a script allows us to see deeply into the play. There are secrets to plumb out of its structure. These secrets…like the ones that shape our own lives…are discovered through introspection, through disciplined study and experimentation.

Every line is designed to unlock the potential of its scene and its actors.

While Jeremy and I practice our assigned lines, our children continue this weekend in Luminous Luna, a brilliant and ambitious musical directed by Ara Beal and Melissa Heston. “The stories that they tell” explore both the near and far side of the moon…both the face she shows to the world and the parts she keeps hidden.

A nobel band of narrators presents stories as gifts to Luna. They endeavor to encourage her to stay in orbit about the earth rather than seek out a new system where that might appreciate Luna more. The narrators endeavors are complicated by the Sun whose easy charisma often outshines Luna. Then there are agents that actively seek to undermine the moon’s worth while gaining glory for themselves. The children of earth and a team of scientists join forces with the narrators to act out stories from Aztec, Chinese, Australian, North American, and Nordic traditions. Theories and mythology of the moon are contrasted through a whirling series of costume changes created by costume artist Miriam Eckenrode.

As of this posting, we have one more opportunity at the Antioch College Amphitheater 7:30pm Sunday night to convince Luna her fortunes best lie here with us. Arrive at 7pm so that you can settle in and listen to the production’s band of Fly Me to the Moon led by music director Barbara Leeds.