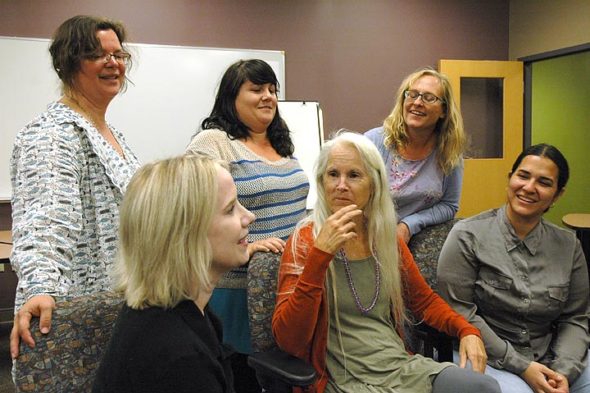 Six of the eight-member cast of the Yellow Springs Theater Company’s new production of “Fefu and Her Friends” rehearsed recently at Antioch University Midwest for performances this weekend and next at First Presbyterian Church. From left, are Amy Magnus, Amy Taint, Lauren Shows, Ali Thomas, Ellen Ballerene and Sommer McGuire. Not shown are Amy Blue and Miriam Eckenrode Saari. (Photo by Carol Simmons) 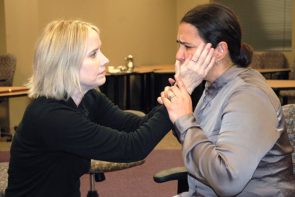 Amy Taint and Sommer McGuire rehearse a scene from the play “Fefu and Her Friends.” (Photo by Carol Simmons)

For being so, well, difficult, Fefu, the title character in Yellow Springs Theater Company’s new production, “Fefu and her Friends,” has a lot of them.

And seven of them have come together for a weekend gathering at her home.

Fefu is a provocateur, a bully and a tease. She seems to delight in pushing friends and loved ones too far, and then watching their reactions.

Written in 1977 by Cuban-American playwright Maria Irene Fornes, the play has frequently been described as feminist, perhaps for the simple reason that a 1970s piece featuring an all-woman cast was pretty rare.

Fornes, however, refrained from calling the work feminist, as does the local production’s director, Ara Beal.

Not that Beal has any qualms about feminism, but the playwright’s intentions were more nuanced and her interests more internal, she said during a recent rehearsal.

The production opens this weekend at First Presbyterian Church with performances at 8 p.m. Thursdays through Saturdays, Sept. 28–30 and Oct. 5–7. Tickets are $10 at the door.

Noting that this year marks the 40th anniversary of the work, Beal said it certainly raises issues about women’s lives, their assumptions and the expectations that are put on them by the culture in which they live.

“There are strains in here that are still really relatable for how women experience society,” Beal said.

“The way Julia [played by Sommer McGuire] talks about the judges and tormenters are so obviously representative of larger patriarchal structures,” Beal said.

And at one point in the play, which was originally set in the mid-1930s, the women each recall having been sent to a psychiatrist during their school years “for being outside the paradigm” for what was acceptable behavior — “for being too smart, for socializing too much with men,” Beal noted.

“So that’s interesting, but it’s hard to say what this show is ultimately about,” Beal said. “It’s not a typical, plot-driven narrative-based play.”

Some reviewers note an element of magical realism in the script. Beal said that it is up to the audience to decide.

“One of the disparities that is interesting for the audience” is that “everything can be explained within a realistic framework if you choose to,” she said. The story combines “naturalism and symbolism.”

“This is just a hard show to label,” said Beal. “It’s a show where we learn what these women think about life and death and love and sex and power by watching their relationships with each other.”

Playing the role of Fefu is regionally lauded actress Amy Taint. The cast is rounded out by Ellen Ballerene, as Cindy;  Amy Blue, as Sue; Miriam Eckenrode Saari, as Paula; Amy Magnus, as Emma; Sommer McGuire, as Julia; Lauren Shows, as Cecilia; and Ali Thomas as Christina.

“The relationships of all these women,” is the feature that stands out most for Thomas, a founding member of the three-year-old YSTC. “A lot of these women go back a long way with each other,” she said.

What has prompted Fefu to invite them to her home is some “traumatic event in her life.” She is beloved, but doesn’t appear to be much of a friend. “Fefu will say anything to get a rise out of someone.”

“It’s really fun,” Thomas said, both for the actors and the audience. The play is “intellectually challenging” as well, she added, “but you may not notice that until you go home, because it really is a lot of fun while you watch it.”

Ballerene, who has appeared in a number of YSTC productions as well as regional shows, agreed. “A lot of us know each other, so there’s a lot of chemistry there.”

Beal said she first read the play when she was in graduate school. It stuck with her “because it’s well written and because of the way it’s staged.”

Nontraditional staging in the second act calls for the audience to divide into four groups and move to four separate settings for short vignettes that are repeated for each group.

One scene, set in a kitchen, will take place in the church’s kitchen. Another, which unfolds in a bedroom, will be set in a Sunday School room. A third will be set in a room opposite the church sanctuary, and the fourth is planned for the front porch.

“I am becoming more and more intrigued as an artist and an audience member with experiences where we’re not going to sit in the dark for two hours,” Beal said. “Especially [those] that kind of shake up the production and give audiences some agency in creating their experience.”

Beal, the executive director of YS Kids Playhouse, said that in working with youth she sees herself as more of an educator than a director. With the YSTC, which brought her in as a guest director, she said she feels more like a collaborator.

“In terms of working with the actors, we’ve kept things very open to suggestions and ideas,” she said.

The play has so many aspects that a variety of perspectives help bring it life and meaning.

She recommends attending with a group of friends. “You’re going to walk out, and you’re all going to have a different idea what the show is about,” she said. And that’s good.