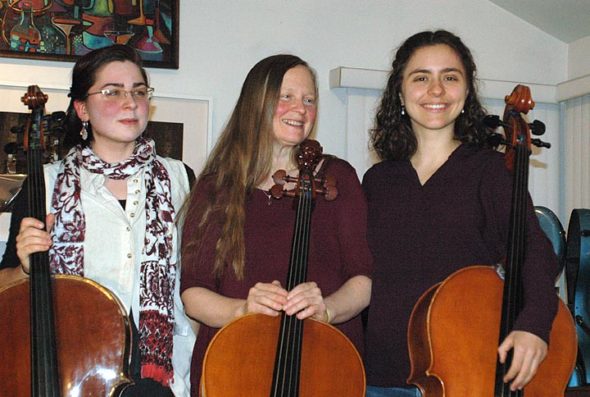 Cello Springs Festival, an 11-day cello extravaganza, returns to Yellow Springs with a series of public, semi-public and private events through Saturday, Jan. 13. From left, are co-directors Miriam and Lisa Liske-Doorandish and Chiara Enderle. (Photo by Carol Simmons)

The cellists have returned to town.

Like snowbirds of a sort, cello players from far and away have descended on Yellow Springs in recent days for the second annual Cello Springs Festival, which runs through Saturday, Jan. 13.

While the cellos aren’t responding especially well to the sub-zero-degree temperatures that came with the new year, their players say they are delighted to be back for the 11-day instrumental intensive.

The festival, which features a range of public, semi-public and private events, is put together by a core trio of musicians with professional and familial ties to the village: Lisa Liske-Doorandish, a Virginia-based performer and teacher and a former longtime faculty member at Friends Music Camp; her eldest daughter, Miriam Liske-Doorandish, a senior at Oberlin Conservatory of Music; and Chiara Enderle, a granddaughter of villager Peg Champney who is pursuing a career in performance based out of Germany.

Enderle’s parents, classical musicians as well, also taught at Friends Music Camp, or FMC, in the 1990s; and Miriam and Chiara met there as young children before becoming campers together when they were older.

The nurturing, collaborative, noncompetitive spirit at FMC — which was co-founded by Champney and former villager, the late Jean Putnam — is an inspirational pillar of the festival, the three organizers agreed.

“I give credit to Friends Music Camp, and Peg, and her vision of people making music together,” Lisa Liske-Doorandish said.

In addition, daughter Miriam noted, that the three organizers have “a lot of experiences of different kinds of festivals,” which also informed the organizational formula of Cello Springs. In addition to public performances, the gathering encourages the participating cellists to get together more informally in support and mentorship.

“One of the most encouraging things is seeing that many of the same people [who participated last year] are coming back,” Miriam Liske-Doorandish said. That tells her that the festival is offering something worthwhile.

Festival organizers also are interested in finding community service and other outreach opportunities, such as visiting an after-school childcare program, while they are in town. “We’re eager for doing that here,” Lisa Liske-Doorandish said, adding that she is open to hearing from people with ideas or requests.

Miriam Liske-Doorandish added that she for one hopes to establish more “longer term relationships with people or organizations” as the festival moves forward. Enderle agreed. “On the ground is the best place to do that.”

While the core participants are professional musicians, the festival is for all cellists and cello-lovers, the organizers said. And there will be chances for students and amateurs to play as well — in group settings and private lessons. One such event is a gathering Saturday, Jan. 6, beginning at 2 p.m., at Rockford Chapel on the Antioch College campus, where any player of any ability level is welcome to join in.

Such an activity, and the festival itself, is possible in the village because Yellow Springs has a rich musical foundation and heritage, Lisa Liske-Doorandish said. “[Longtime local teacher and cellist] Shirley Mullins and others helped mentor world-class musicians,” she said. Their example shows what a dedicated, ongoing local music program can accomplish.

“Shirley Mullins and FMC. They’re the two pillars of this whole thing,” she said.

The festival wouldn’t exist at all, however, without the hospitality and support of villagers who host and feed the visiting musicians. A grant from Oberlin is helping with some of the organizational costs, but the performers are participating without pay other than through donations. All festival events are free of charge (though private lessons have a sliding fee set by the individual teachers), with donations accepted at the door of each event. And organizers want to keep it that way. Which makes local hospitality all the more vital.

Jane Baker hosted cellists in her Phillips Street home for the first festival and is hosting again this year. “It’s wonderful having a house full of musicians,” she said this week. She said she enjoys hearing them practice and appreciates the chance to get better acquainted with interesting people.

Baker said she also values what Cello Springs brings to the community. “It’s unique,” especially for a community of this size, and “it’s inspirational.” As someone who studied cello, she said she particularly appreciates the festival’s inclusive outreach with local residents and students.

Lisa Liske-Doorandish said that she and the other out-of-town musicians are deeply grateful to Baker and others like her who make their stay possible and “convivial.”

All told, more than a dozen cellists are coming in for all or part of the festival. In addition to the three organizers, visiting participants include Joshua Dent, who is based in Nashville, Malina Rauschenfels, a multi-instrumentalist out of Cleveland;  David Skrill, an Oberlin Conservatory student; and Lisa’s younger daughter, Eleanor, newly 16, who is joining the festival as an apprentice artist.

Performance participants also will include a cello quartet from Columbus, U-Celli, whose members will bring some of their students to the final concert, Saturday, Jan. 13.

That final program will include a French piece for 12 celli. “It will be a cello explosion,” Miriam said.

Those who would like to host a cellist during the festival, provide a meal for the resident artists, assist with practical tasks or make a financial donation to the project may contact the organizers at communitycelloworks@yahoo.com or 540-392-4544. To donate online, visit http://www.gofundme.com/cello-springs-festival. For more information, visit cellospringsfestival.weebly.com.