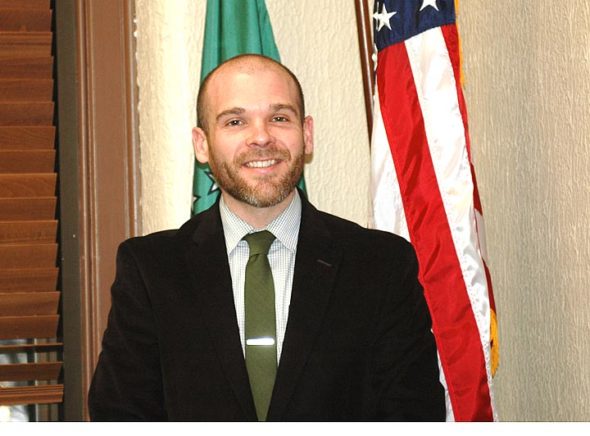 Yellow Springs resident AJ Williams has been appointed Greene County Clerk of Courts after the retirement of longtime Clerk Terri Mazur. He will be sworn into office Feb. 2, and will represent the Greene County Republican Party in the May 8 primary. (Photo by Carol Simmons)

The nameplate on the door of the Greene County Clerk of Courts office still listed longtime clerk Terri Mazur as the occupant mid-month, even though Yellow Springs resident AJ Williams had taken up residence at the first of the year.

Williams was unanimously chosen by the County Board of Commissioners to fill the post as interim clerk after Mazur, herself a Yellow Springs native now living in Xenia, announced her retirement 21 years into the job.

Apologizing for the sparseness of the corner office on the ground floor of the county courthouse in downtown Xenia, Williams said he was reluctant to decorate it with personal items until the county Republican Party Central Committee made the appointment official. That decision came Thursday, Jan. 18, when the committee echoed the commissioner’s unanimous decision. He will be sworn in officially Friday, Feb. 2. The vote also secures Williams position as the party’s choice in the open primary May 8. The primary winner will go on to run in the Nov. 6 general election to fulfill the remainder of Mazur’s term.

In the meantime, Williams, who most recently served as chief deputy to the Greene County Recorder, is learning the ins and outs of the job.

“The courts office handles a massive amount of records,” he said.

Every record related to the Greene County Court of Common Pleas and every filing regarding the District Court of Appeals are under the clerk of courts purview. Common pleas are trial courts with jurisdiction in all criminal felony cases. They also handle civil and domestic relations cases, including marriages and divorces.

Twelve people work in the courthouse office and six staff the auto title division on Ledbetter Road, where the local state-run Bureau of Motor Vehicle’s office is also located.

“The title division is pretty self-sufficient,” Williams said. Working in cooperation with the state, “it’s pretty straight forward what you can and can not do.”

At the courthouse, the employees handle paper and digital files, which are all archived along with microfilm of each record.

In addition to the various local attorneys fulfilling official functions, the people who come into the clerk’s office each day reflect the spectrum of life in Greene County. Some are happy with their business, but many are not.

“People are here on their worst days,” he said. “It’s tough, especially with divorces.”

Being helpful and nonjudgmental is important. But there’s only so much help Williams’ office can provide.

“We can’t offer legal advice,” he said. “I will advise you to seek legal council” if that seems desired.

In addition to court-related filings, the clerk’s office also handles the collection of all revenue related to court costs, including bonds, fines and forfeitures.

Greene County has two presiding judges, Stephen A. Wolaver and Michael A. Buckwalter. As clerk, Williams sits in on arraignments, swears in the grand jury and swears in the trial jury.

“In Judge Wolaver’s court, the clerk will typically read the verdict” as well, Williams said. “It’s not like on TV. It’s real life.”

An additional clerk responsibility is personally handling the paper work for all cases that have been sealed or expunged. “Only the clerk can do that,” Williams said. “It’s a huge responsibility,” he noted, adding that until the task is completed, the original rulings still stand as public record.

An interest in public service and administration led Williams on his current career path. A native of Beavercreek, he attended Carroll High School before studying political science at the University of Dayton, where he went on to earn a master’s degree in public administration. He worked for the Ohio secretary of state’s office before going to work for the county over three years ago.

He moved to Yellow Springs after he joined the county recorder’s office and shares a home with his wife, Leah, and their 1½-year-old greater Swiss mountain dog, Bern. The couple married in 2016 at the Greene County Courthouse.

Williams said he enjoys being able to go home for lunch to take Bern outside. He ruefully added that despite being a breed that originated in the Swiss Alps, Bern has been notably unhappy with the recent cold.

Leah Williams is human relations manager for Dorothy Lane Market. AJ — short for Andrew James — said the couple met through the area grocery as Leah worked her way up in administration and he worked on the bread truck. He started while a student, joining two of his brothers also employed at the store. Williams said he can’t explain exactly why, but he continues to go in each Saturday morning, arriving at 4 a.m., for bread truck deliveries.

Williams said he “feels honored” to have been chosen by the county commissioners and Republican Central Committee to succeed Mazur until the general election.

He hopes to continue working in public administration, especially at the county level.