Villagers to run for county seats

Three Yellow Springs residents are among the slate of primary candidates certified by the Greene County Board of Elections to appear on the May 8 ballot. All three are seeking county office.

Steve Bujenovic, a physician, has his eyes set on the Greene County Board of Commissioners, running as a Democrat.

Cyndi Pauwels, also running as a Democrat, and AJ Williams, a Republican, are seeking to complete the Greene County Clerk of Courts term opened with the December retirement of Terri Mazur.

In the Commissioners’ race, one seat on the three-person board is up for decision this year. Local hopeful Bujenovic is facing Susan Lopez, of Beavercreek, in the Democratic primary. The winner will appear on the general election ballot in November against the Republican primary winner. Two candidates are running for the Republican slot: incumbent Alan Anderson and Dick Gould, both of Xenia.

“The Board of Greene County Commissioners is the general administrative body for county government and serves as the taxing, budgeting, appropriating and purchasing authority” for the county, according to the county website.

In the Clerk of Courts race, Pauwels is unopposed in the Democrat primary, while Williams, who currently holds the clerk’s position through temporary appointment, is being challenged in the Republican contest by Alexander Blaschak, a 21-year-old newcomer from Spring Valley.

The court clerks office, which has a staff of about 12 at the Courthouse, processes all records related to the Greene County Court of Common Pleas and every filing for the District Court of Appeals. Criminal felony cases and all civil and domestic relations cases, including marriages and divorces, are under its purview. The Greene County court clerk’s office also oversees the county’s auto title division on Ledbetter Road, where there is a staff of six. 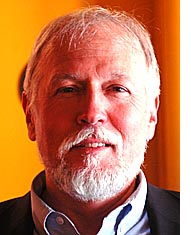 Steve Bujenovic is a candidate in the Democratic primary for a seat on the Greene County Board of Commissioners. (Photo by Carol Simmons)

Steve Bujenovic  says he wasn’t thinking about entering the Commissioners race when he went to the Greene County Democratic Party headquarters this past December to ask how he could help.

But party chair Doris Adams’ reply, “Run for office,” spurred him into action.

In an interview this week, Bujenovic said he has also been inspired by the directive of President Obama, who at the end of his term “famously said, ‘if you don’t like the way things are, get a clipboard.’”

Bujenovic doesn’t like the way things are on the county Board of Commissioners.

For starters, no Democrat has been elected to serve on the board in 30 years, he said. Bujenovic said that a community is not well served when a single party holds complete sway for so long.

“After that period of time, rather than doing their job” to serve the people, single party members can focus more on “making the job work for them,” he said.

“The overwhelming thing I would like to do is give a voice to the 35 to 40 percent of voices in Greene County who vote Independent or Democrat.”

A 1977 graduate of Wayne High School in Huber Heights, Bujenovic began his life in Greene County’s Bath Township, attending Fairborn’s Central Elementary School before his family moved to Huber Heights. He went on to Miami University and followed up by attending medical school at Wright State University.

His medical career took him to Louisiana, where he and his wife, Tina, raised two children. With their children grown and on their own, Bujenovic and his wife moved back to the area of his youth in 2015, settling in Yellow Springs. He continues working part time as a physician in a free clinic at Miami Valley Hospital in Dayton.

In medical practice for over 30 years, Bujenovic’s experience includes having served as director of nuclear medicine at a hospital in Baton Rouge, where he managed a practice with annual revenue of $3 million and 10 employees. He said that in that capacity, he also has experience handling service contracts, and he has  sat on state boards.

In his bid for county office, Bujenovic said he would like to see more transparency in the Commissioners’ work. He credits a group of Yellow Springs residents who have been attending the board’s meetings the past year for pressing Commissioners to make several recent changes in their proceedings, including video taping the meetings and giving residents the opportunity to speak before the board takes action, rather than after.

But more needs to be done, Bujenovic said.

“When you go to the meetings, a lot has been decided already.” That leaves the public out of the loop, unaware of the reasons certain decisions are being made, he said. “I feel that’s unfortunate.”

He especially would like to see more discussion when contracts are being awarded. He said that contracts are often given out to what Commissioners describe as the “best bid,” which isn’t always the lowest bid. Bujenovic wants to hear more about the criteria that determines a “best” bid. He said he is aware of anecdotal word on the street of minority contractors feeling shut out, and more transparency would be a way to address those concerns.

He would also like to see the county take more action in confronting the opioid epidemic. He said he is disappointed that Commissioners did not take up his suggestion that Greene County join Montgomery County in a lawsuit seeking funds from pharmaceutical companies to support addiction treatment services.

As a Democrat, Bujenovic said he has been distressed to hear right-wing national commentators describe the party as “an enemy of America.” And he is concerned that the party has a negative stigma among the majority of Greene County voters.

“But I’m hopeful this year,” he said. 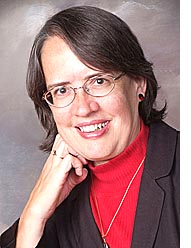 Running unopposed in the Democratic primary for the county clerk of courts office, Cyndi Pauwels said she is using the May 8 primary as an opportunity to increase her name recognition among county voters while developing a platform for the November general election.

A resident of Yellow Springs since 2004, Pauwels may be best known locally as a writer and editor who has written two novels and serves as assistant director of the Antioch Writers’ Workshop.

But her working career includes many years of public service, both in nonprofit and government roles, she said in an interview this week.

“I have spent most of my adult life working in the criminal justice system,” she said.

She said she decided to run for the Greene County courts clerk office after being approached by members of the community who told her, “Hey, this office is open, and you’d be perfect for it.”

She said she didn’t have trouble committing to the idea. “I have missed the court system,” she said.

And she has sympathy for the community members who have business with the courts.

“It can be a daunting experience, especially for the average person,” she said. “Most of the time nobody wants to be there.”

Pauwels said she can relate “from a professional standpoint” and also personally, having family members over the years, “in dire straights,” calling to ask, “What do I do?”

One of her goals, if elected, is to make the process of dealing with the courts as easy as possible, she said.

A particular area of concern for her is  bail bonds. She is troubled by instances in which someone remains incarcerated only for the lack of money to post bail. “It’s an important topic the county needs to address,” she said.

As a candidate, she also affirms an interest in making “certain our tax dollars are spent in a responsible manner.”

As a Democrat running in a county that has traditionally voted Republican, Pauwels    isn’t nonplussed by the odds. One thing she knows about elections: “Never try to second-guess the public.” 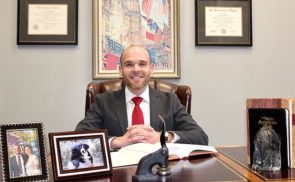 AJ Williams, currently serving in the county clerk of courts position, is running in the Republican primary for the office. (Submitted photo)

Running in the Republican primary for the county clerk of courts office, AJ Williams has the advantage of not only being the party’s official candidate, but also currently serving in the clerk’s role after his unanimous appointment by the Republican Central Committee in January.

Williams, who most recently worked in the county Recorder’s office before the courts appointment, said he feels honored to serve the county as courts clerk and hopes to continue in that role as he gets deeper into the job.

A native of Beavercreek and a graduate of Carroll High School, Williams has a master’s degree in public administration from the University of Dayton, where he studied political science as an undergraduate. He worked for the Ohio secretary of state’s office before going to work for the county over three years ago.

He moved to Yellow Springs after joining the county recorder’s office and shares a home with his wife, Leah, and their 1½-year-old greater Swiss mountain dog, Bern. The couple married in 2016 at the Greene County Courthouse.

An interest in public service is what drew him to government work, he said in an interview after his appointment.

An encounter with David Graham, Greene County’s auditor, not only sealed that interest, but also has served as a model for how a public servant should behave, he said, noting Graham’s combination of professionalism and friendly engagement.

It’s an important combination in the clerk of court’s office, where many “people are here on their worst days,” he said.

In moving forward, Williams said this week that he is fortunate to have a good system already in place that implements sound technology with “personal attention to detail.” At the same time, he is committed to keeping the system updated and running smoothly.

He is also interested in becoming more deeply involved with the state clerks association, as was his predecessor, Terri Mazur, who served as the group’s president. And he would like to pursue more community engagement opportunities, such as hosting student tours of the courthouse and other efforts to open and demystify the workings of the courts system.

No current Yellow Springs resident will be on the May 8 ballot as a candidate for office above the county level.

But Yellow Springs native and current state Attorney General Mike DeWine is running for the Republican bid to be Ohio’s next governor.

DeWine, who currently calls Cedarville home, still has many family members living in town. His political career has included a term as Ohio state senator, four terms as U.S. congressman, two terms as U.S. senator and one as lieutenant governor under Gov. George Voinovich.

Early voting for the May 8 election begins Tuesday, April 10. Residents have until Monday, April 9, to register.