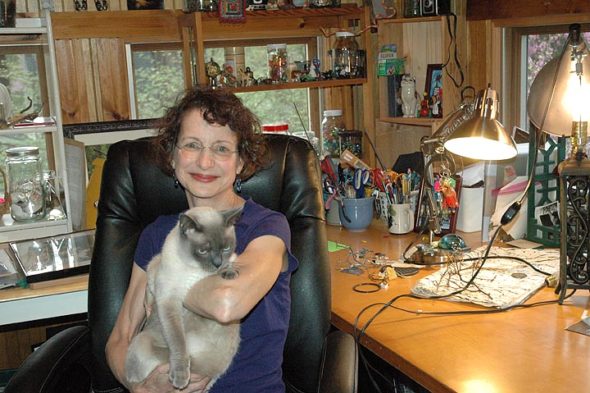 “Dreamscapes,” an exhibition of art works by Carla Steiger, will open Friday, May 18, at the Yellow Springs Arts Council Gallery, with a reception from 6–8 p.m. Steiger creates assemblages, which she then photographs, in a studio space on the second floor of her art-filled home. (Photo by Carol Simmons)

Both the passage and absence of time play significant roles in the art of Carla Steiger.

While long, meditative hours go into the gathering and arrangement of items that form the imagery of her individual pieces,  the final photographic results seem to exist in a space outside of time.

“Dream-like” is the description of Nancy Mellon, coordinator of the Yellow Springs Arts Council Gallery, which will be presenting an exhibition of Steiger’s work Friday, May 18, trough Sunday, June 10.

“In small dream-like worlds, she creates an irrational reality,” according to Mellon.

For longtime villager Steiger, the work is inspired by Surrealism, which has its roots in early 20th century French art. Hallmarks are illogical images, startling juxtapositions and other elements of surprise.

Steiger loves it all.

“I love the unexpected nature of each picture, and the mystery,” she said in a recent interview at her art-filled home on East Limestone Street.

Particularly inspiring are the works of René Magritte and Joseph Cornell.

Cornell is best known for his three-dimensional boxes featuring arrangements of incongruous items and images.

Steiger’s process includes making Cornell-like tableaux from a variety of sources: old photographs, small toys, pictures cut from magazines, patterned fabric and wrapping paper and found objects, both natural and human-made. But she takes the process further by photographing the arrangement. The results incorporate shadow, spatial ambiguities and size distortions, creating new worlds that exist out of time and place.

A favorite image is wings.

“I like to make things fly,” Steiger said with a smile.

A native of Chicago, Steiger earned a bachelor of arts degree in studio art and art history from Oberlin College and a master of fine arts degree in photography from the University of Minnesota. She met her husband, Mark Meister, while they were both in graduate school. Meister recently retired as the director of the Boonshoft Museum of Discovery in Dayton. The pair have two adult daughters.

Steiger said she began taking photographs in art school. The work of Depression-era photographer Walker Evans was a major influence.

“He was compositionally perfect,” Steiger said. “So studying him was the way I taught myself how to put together a photograph.”

Her early work leaned toward photojournalism, and the search for the “decisive moment,” she said.

While at Oberlin, she also spent a year in Italy, where the Renaissance masters made a deep impression not only on her imagery, but also sparked an interest in color.

She turned to surrealism as she sought a way to make art “where I used my imagination,” she said.

“I wanted to create pictures with mystery and whimsy,” she added.

The photographer Olivia Parker, whom Steiger met while in graduate school, was a major influence, she said. Her pictures, one of which hangs in Steiger’s living room, have an ambiguous space that Steiger finds mesmerizing.

“I just thought they were magical,” she said of discovering Parker’s work.

The magical, mysterious quality of Surrealism provides a foundation for individual interpretations, another aspect Steiger loves.

“There’s not an assigned meaning,” she said.

“I want to challenge people to create their own narratives and understand the pieces in their own way,” she writes in her artist statement for the Arts Council exhibition. Twenty-eight pieces will be on view. Each is untitled to further encourage individual interpretation.

The artist has also taught photography at various colleges and universities, as well as at Yellow Springs High School. Her work has been featured in major exhibitions, and she has pieces in the permanent collections of galleries and museums across the country.

In addition to art-making and teaching, Steiger is also a free-lance writer who has had articles in a variety of publications, including the Yellow Springs News.

Her wide interest in the world is reflected by her return to school to earn a master of arts in international comparative politics, specializing in East Asia, in 2010.

The Arts Council exhibition will feature an opening reception, with refreshments, from 6–8 p.m. Friday, May 18, at the Gallery, with an artist demonstration at 7 p.m. Admission is free.

One Response to “Whimsy, mystery on exhibit”