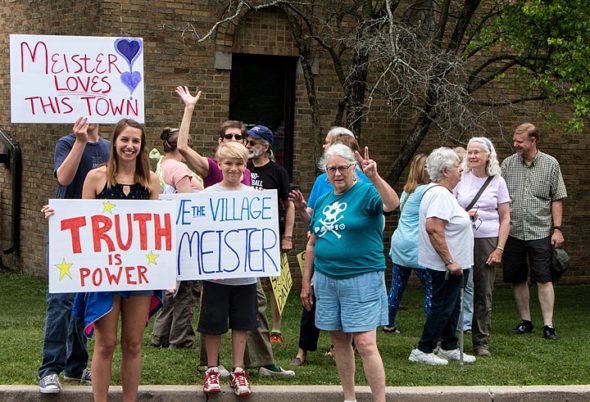 About 25 villagers took part Saturday in a protest against the proposed disciplinary actions against Cpl. Dave Meister of the Yellow Springs police department. The group carried posters in support of Meister through downtown. (Photo by Morgan Beard)

The proposed demotion and additional discipline of a popular local police officer has sparked concern in Yellow Springs, including a protest last weekend.

A pre-disciplinary hearing for Cpl. David Meister will take place this Friday, June 29, at 1 p.m. in the Bryan Center. Clerk of Courts Judy Kintner will serve as the hearing officer at the event. The hearing is closed to the public.

Meister requested the hearing after a two-months-long investigation found that he acted improperly during two March traffic stops, according to a memo from Chief Brian Carlson to Meister on May 25. The hearing, which Meister could have waived, provides Meister the right to respond to the investigation findings and to present mitigating evidence.

According to the memo from Carlson, the investigation found that Meister’s actions during the two traffic stops, “deviated from our policy for possible OVI violations and that most importantly his actions could have resulted in harm to the general public and or the offender.”

Chief Carlson recommended that Meister be demoted from corporal to officer; that he receive a three-day suspension without pay; that he be put on a performance improvement plan with a last-chance agreement, and that he be put on probation for 12 months.

Carlson last week emphasized that Meister is not being fired.  However, according to attorney Duwell, the concern is that if the performance plan is imposed, the Village could easily fire him at a later time.

Meister feels the proposed discipline is excessive given the charges and that it’s being imposed unfairly, according to Duwell, who emphasized that while Chief Carlson has been an advocate for his officers having discretion when making arrests, he seems to most often question decisions by Meister.

“Having been given discretion, it seems Cpl. Meister’s decisions are challenged more frequently than those of other officers,” Duwell said in an interview Monday.

According to a memo from Carlson to Meister dated May 24, the discipline is linked to two traffic stops that took place March 1 and March 14 of this year. According to the memo, “both vehicle drivers were repeat offenders, under suspension and possibly intoxicated.”

The incident reports and dash-cam videos for the traffic stops and Meister’s personnel file were not made available by press time. Carlson also said he can’t comment on specifics of the incidents.

However, according to Duwell, in one incident Meister stopped a local woman who was driving while under suspension and had previous OVI arrests. While a review of the incident showed that she might have been intoxicated, the woman said she had not been drinking, and she did not appear impaired to Meister. Because she was driving while under suspension, he had her car towed away, as is required by departmental policy, then gave her a ride home.

In the second incident, he stopped a car that was driving at night without lights. While the young male driver was clearly intoxicated, Meister chose to not charge him with an OVI, partly because he knew the young man was already dealing with a serious family crisis. Rather, he took the keys to the car and required the young man to walk the block to his house.

In the second case, according to Duwell, Meister was criticized because he had not charged the driver with an OVI and allowed him to walk home; in the first case he did not further his investigation to see if the woman was impaired.

“He is being charged with being too lenient,” Duwell said this week.

However, Carlson emphasized that the larger issue is community safety.

“This is more of a safety concern in the totality of the events, not just in the moment,” Carlson said. “We’re set up to get people help and not put them back behind the wheel.”

In a response this week, Meister said he does not agree with being punished for his approach.

“I feel I have done the appropriate thing for the people involved at the time, with my community in mind,” he said in an interview Tuesday.

Meister said he cares a great deal about community safety, and having had an uncle die from a crash with a drunk driver, he understands the gravity of the situation.

“I don’t diminish the seriousness of having an impaired driver,” he said.

Meister also emphasized what he feels is an unfair focus on him.

“Officers making similar decisions are treated differently,” he said. “I see safety issues happen, but no other officer has been disciplined in this way.”

A pre-disciplinary hearing is considered an essential part of the due process of a government employee prior to discipline being imposed. At the hearing, Meister has the opportunity to hear the charges against him and to offer evidence on his own behalf, according to attorney Conard.

Yellow Springs Clerk of Council Judy Kintner will serve as the hearing officer at this Friday’s pre-disciplinary hearing. Village Manager Patti Bates chooses the hearing officer, who is required to be a Village employee not in the employee’s chain of command, and someone who has supervisory responsibilities. Duwell and Meister turned down the Village’s first choice for hearing officer, Ruthe Anne Lillich, who is administrative assistant to Village Manager Patti Bates and the Village human resources officer. Duwell registered concern over the pick due to what Meister perceived as Lillich’s bias against him, and Kintner was selected instead.

Kintner will determine if misconduct occurred, according to Village Solicitor Conard, and Bates will make the final decision on discipline.

If Meister does not accept the hearing outcome, his next option is to go through the court system, Duwell said.

“If my client wants to fight, we will fight this,” he said.

However, Duwell said last week, he is hopeful that the two sides can resolve the issue.

“I still hope that everything will be worked out,” he said.

About 25 villagers showed up on Saturday, June 23, at noon at the Bryan Center, to protest what they see as unjust discipline on Meister. Protestors then walked through downtown carrying signs in support of Meister.

“It’s important that Village leaders hear from those of us who are distressed and confused” about the situation, said Gilah Pomeranz, who attended.

In a written statement to Village Manager Bates and Carlson, Pomeranz stated, “As a native Yellow Springer who has lived her entire life in this village, I see Dave Meister as a quintessential, valuable and beloved Officer, in the tradition of some of our best — Chief McKee, Hugh Livingston, Al Pierce, John Winks and Chief Grote, to name just a few. Dave’s love for and commitment to our community resonates with me in all my interactions with him, whether he is on the job, next to me in the pews at First Presbyterian, or we’re just chatting in Tom’s or Current Cuisine and the Little Art.”

Meister is the only full-time Yellow Springs police officer who lives in Yellow Springs. He and his wife, Zo, have four children. The couple moved here, where Zo grew up, after living a decade in the Pacific Northwest. He took a job in the local department in 2010, and was one of three finalists for the position of chief in 2017. In January of this year, he was promoted to the newly created position of corporal.

To First Presbyterian Church pastor Aaron Saari, it doesn’t make sense to discipline Meister for the compassionate and less punitive approach to policing that most villagers seem to prefer.

“Dave to me represents the sort of officer a majority of Yellow Springs seems to want,” he said this week.

An advocate for those with mental health issues, Saari is especially appreciative of Meister’s skill in dealing with those who struggle with mental illness.

“He does tremendous work with those with mental health issues,” he said.

Another villager who attended last Saturday’s protest, Kate Anderson, also questioned why Meister was being disciplined.

“Dave seems to be being punished for the kind of community policing that villagers want,” Anderson said. “Why would you punish him for doing what we’ve asked him to do?”

In a letter to the News this week, Village Council President Brian Housh emphasized the complexity of the demands of community policing, as practiced in Yellow Springs.

“Chief Carlson, Manager Bates and Village Council do not take any disciplinary decision lightly,” Housh wrote. “The Village expects its officers to protect villagers and visitors. If any officer is found to have acted in a manner that is inconsistent with this paramount duty, that officer may and should be subject to discipline.”