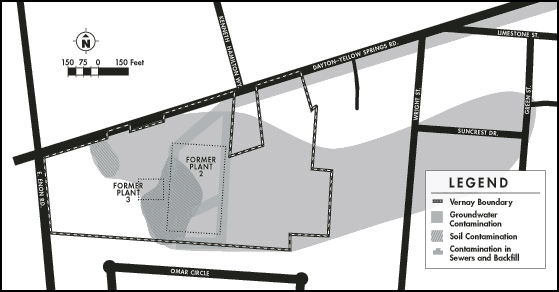 Groundwater contaminated with chlorinated solvents and volatile organic compounds at levels above EPA drinking water standards from the former Vernay rubber parts manufacturing facility on Dayton Street has spread eastward across Wright Street and Suncrest Drive. Soil contamination at the site is concentrated in an area near the two former plants, where chlorinated solvents used to degrease metal parts were disposed, and at the front of a property, where a common pesticide was used. Contamination is also present in the the storm sewers (and the backfill surrounding them), which continue to transport pollutants off the property. (Map was generated using data and maps from cleanup oversight firm EHS Technology Group of Dayton)

A member of the Yellow Springs Environmental Commission urged Village Council at its Aug. 20 meeting to weigh in on a plan to clean up a highly contaminated industrial site in the village.

In his presentation, Duard Headley of the Environmental Commission, or EC, shared EC’s response to a draft plan to remediate pollution at the former Vernay Laboratories facility at 875 Dayton St.

The plan, originally drafted by Vernay in 2009 and amended by the company this spring, is part of a U.S. EPA-supervised cleanup that began in 2002 to address contamination at the one-time rubber parts manufacturing site. Specifically, the plan identifies ways to address the pollution found in the property’s soil and storm water runoff and in a groundwater plume directly below the property and extending beneath residential neighborhoods to the east.

The contaminants of concern from Vernay’s facility, operational from 1951 to 2004, include known and likely carcinogens and nervous system toxins such as the chlorinated solvents TCE and PCE and their breakdown product, vinyl chloride, along with several volatile organic compounds.

• View a larger map of the plume.

Before the EPA agrees to the plan, the Village will have an opportunity to share its thoughts with the agency during an upcoming public comment period, Headley explained at the meeting.

“You have unique standing,” Headley said of the Village’s ability to weigh in.

Reached for comment this week, a U.S. EPA spokesperson said that the EPA will soon ask the company for more information before moving on to next steps. A public comment period, and also likely a public hearing, will be held after the EPA issues its Statement of Basis on the road to a final plan, the spokesperson confirmed.

“However, we do not expect this to be much longer,” he added.

Headley, who holds a B.S. in chemistry and an M.S. in environmental science, said at the meeting that his biggest concern with the draft plan is that contamination may continue to migrate off the property, which he said Vernay does not plan to directly address.

“Most significantly, there are no off-site remediation measures beyond what is currently in place,” he said.

According to Headley, if the pollutants continue to spread, villagers and municipal employees could be exposed to contamination from Village-owned infrastructure such as storm water pipes, leading to possible municipal liability.

In urging the Village to share its concerns with the EPA, Headley added that any future redevelopment of the land hinges upon a thorough cleanup. In summary, Headley said there are “some positive things about the plan” as well as “some reasons to be concerned.”

On the positive side, Headley noted that Vernay plans to remediate six “hot spots” of soil contamination on the property, where high concentrations of chlorinated solvents known as DNAPLs flush contamination into local storm sewers and waterways when it rains.

“If done well this could eliminate a significant portion of the overall contamination,” according to EC’s report to Council.

But the soil remediation plan is too vague, Headley added, and it’s not clear how much soil will actually be removed.

Vernay plans to let natural attenuation break down the contaminants in the off-site plume and to phase out its monitoring of the area over time if contaminant levels are stable. The company also hopes to convince the Village to close the four residential wells still in use in the area and pass a municipal ordinance to prohibit property owners from drilling new wells.

But EC’s report was wary about the plans for off-site contamination, noting that it could take many decades for contaminants to dissipate and that the company should be aiming for decreasing concentrations of contaminants, not just a stable plume. The report also pointed to contamination on High Street, where in 2002 TCE and five other chemicals associated with Vernay’s operations were found in groundwater, as evidence that the plume may be more widespread than the company believes. While that pollution was found under a former YSI facility, it included chemicals never used by YSI.

Furthermore, Vernay’s proposal to possibly discharge the groundwater being extracted and carbon filtered directly into the storm water system rather than sending it to the wastewater treatment plant raised concerns to the EC report’s authors.

“Discharging into the storm sewer would route it past our wellhead,” the report noted.

Finally, restriction on the use of the property into the future could affect Village planning, according to the EC report. Once cleaned up, the property will only allow industrial and commercial uses, according to Vernay’s plan, and other deed restrictions or environmental covenants  require that any buildings on site keep soil gas from entering the structures and sickening occupants. Residential uses and use of groundwater on the site will be prohibited, according to the plan.

According to Village Manager Patti Bates, Village staff has reviewed Vernay’s plan and have already expressed their concerns.

For instance, the Village is worried that contamination of the Cedarville aquifer starting 15 feet below the Vernay property could potentially affect the source for local drinking water, according to Bates. While the EPA had previously ruled that possibility out, the Village is not convinced the aquifers are not geologically connected, she said.

Finally, Bates said, the Village has concerns about Vernay’s plans to isolate existing storm water pipes and re-route storm water at the site. Vernay’s plan is intended to reduce the amount of contaminated water currently entering storm sewers, which transport the water across Dayton Street and dump it into an unnamed creek that empties into the Village wetland on the Glass Farm. The Village is concerned about changing the storm water systems since the current system was designed to accommodate area geology, including the presence of several springs in the area.

In a discussion that followed the presentation, Council President Brian Housh said that the Village has been waiting on an approved plan so it can figure out what to do with that property.

“Isn’t it in our interest to get some kind of plan approved that we can somewhat accept and move on?” Housh asked at the meeting.

Headley responded that the Village should define what is “acceptable,” especially with continuing uncertainty about the extent of groundwater contamination and how the Village might be liable “once there’s a sign off.”

Council member Lisa Kreeger said she is grateful for the knowledge and expertise of the EC, and wants to make sure that both Council and the community “understand what’s going on.”

“We should take action to understand the situation and to make as many recommendations as we can that can protect us from liability,” Kreeger said.

In the end, Council directed Village staff to prepare a response to the EPA.

• In two separate pieces of legislation, Council extended its solid waste contract with Rumpke and raised rates for garbage and recycling collection. Council unanimously passed a two-year extension to its contract with Rumpke, which was last granted the contract after competitive bidding in 2015. Council also unanimously passed an ordinance that increases the rates for garbage collection for residents and businesses by three percent across the board. The new rates take effect Sept. 1.

• Council unanimously passed a housing vision and values statement. It reads: “Yellow Springs has a housing stock that enables a diverse community to live and work here. The Yellow Springs Village Government, with community members, is committed to being a welcoming community which is environmentally and economically sustainable. This requires housing that enables people of diverse races, ages, sexual orientations, gender identities, ethnicities, economic statuses, physical & mental abilities, religious affiliations, skills and lifestyles to afford to live here. We aim for a balanced population across the age spectrum, valuing seniors as well as children and those in between, single people as well as families. We understand that each Villager contributes to the wholeness and health of the community and are particularly committed to those struggling to remain in Yellow Springs because of affordability challenges. We also welcome newcomers wishing to move to our community. We encourage housing and workplaces that allow Villagers to live and work here. We recognize that, while homeownership is a goal for many, there are many others for whom renting is the best option and we seek a balance of both. Mixed income housing and increased density in all new development will be essential to reach our goals of promoting affordability and healthy neighborhoods.”

• In a related discussion, Patrick Bowen, who authored the Yellow Springs Housing Needs Assessment, talked about housing goals in what he said was his third presentation before Council. Such goals can both meet the needs of existing residents, and attract those the Village wants here, Bowen explained.

Pointing to data from the assessment, Bowen said the Village should focus on the areas where local housing lags other area communities, especially housing for younger people and larger families, rental units of all types and affordable housing.

Bowen noted that few properties sell for under $150,000, and suggested affordable housing strategies such as inclusionary zoning, density bonuses and in lieu fees. The Village should simultaneously address housing for higher-income households, he said.

“You still want goals to support projected high-income households,” Bowen said. “People’s incomes will climb and you are going to want to have housing that meets their needs.”

“We need to encourage the view that mixed-income development and affordable-housing development promotes a healthy neighborhood. … We need to make that case,” she said.

From the floor, Emily Seibel of local affordable housing land trust Home, Inc. agreed with Hempfling that Council should set a goal of 50 percent of new housing being affordable. The needs of the population below area median income won’t be met by the open market, she asserted.

“I think those days are behind us,” Seibel said.

Bowen also suggested that Council reach out to developers. By setting goals, providing incentives and working closely with developers, the village can address its housing challenges.

“Start marketing yourselves,” he said.

Bowen ended his talk by noting after a recent drive through town that the village can build on its strengths.

“Preserve what you have. Preserve the vibe and the feel you have.”

• Council’s next regular meeting is Tuesday, Sept. 4, at 7 p.m. in Council Chambers.