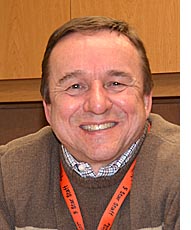 Mike Montgomery has been director of the Friends Care Community for almost a year, having begun in early December 2017. Since beginning the job, he's most proud of making some changes that contributed to raising staff morale, and adding new staff. (Photo by Diane Chiddister)

Mike Montgomery has been director of the Friends Care Community for almost a year, having begun in early December 2017. Since beginning the job, he’s most proud of making some changes that contributed to raising staff morale, and adding new staff. (Photo by Diane Chiddister)

While Mike Montgomery is the executive director of Friends Care Community, he takes a modest position regarding how critical he is to the functioning of the local continuing care center.

“I think I’m the least important person here,” he said in an interview last week. “If I don’t show up to work, it’s not a big deal. But if an aide doesn’t show up, it means something to the care our residents receive.”

Having caring and competent staff is the most critical component of a healthcare community, Montgomery believes, so it’s fitting that when he’s asked to list the accomplishments he’s most proud of in his first year on the job, he starts with having improved staff morale. A survey of staff when he arrived revealed that morale was low, so he dug in to find out why.

While Montgomery is careful to not criticize individuals, it was clear that some things just weren’t working. First off, he worked to ease out the previous director of nursing, who was not perceived to be a team player, and replace her with someone who is. That transition went smoothly, he said, and he’s very happy with Hannah Moorman, the new director of nursing, whom he believes sets a new tone for the center.

“That was the hardest one, and it turned out well,” he said.

A second component of improving morale was bringing in more actual staff. Part of that change involves no longer using as many contracted staff, workers who are actually employed by a temp agency rather than the care center itself. When he arrived on the job, a considerable portion of those working were temp employees, he said, which meant they had little allegiance to the care center itself, only to the agency they worked for.

“When they’re our employees, we all have the same mission, which is serving the residents,” Montgomery said. “When they work for other companies, their priority is just to make money. They don’t have the same buy-in to our organization.”

While the process is ongoing, the percentage of temporary employees has declined considerably this year, from 20 percent to 10 percent of employees, he said. FCC had 66 permanent employees when he arrived — it now has 76 —  and he intends to hire about 11 more.

Friends Care is unusual in the world of nursing homes, a world known for its low pay, for having many staff who have worked there for years. Montgomery points to this longevity with pride.

“We have some staff who have been here more than 30 years,” he said. “That boggles my mind.”

What’s singular about the Friends Care staff is workers’ caring for residents, he believes.

“You can have the best policies, but if it’s not done on the floor, it doesn’t matter,” he said. “You can’t teach compassion and caring. But we have oodles of it here.”

As part of the Friends Care changes, the center is taking back its food service. For cost-cutting purposes, the FCC had in recent years contracted out its food service to an outside business, but the meals served were not what residents wanted, Montgomery said.

“We want to step our dietary program up more,” he said. “We didn’t have enough control.”

So the center is hiring its own food service staff, and hopes to soon serve better-tasting and healthier meals to its residents.

“When it comes to resident satisfaction, food is important,” he said.

Finally, Montgomery pointed to having remodeled the care center entrance as a source of pride. When he arrived on the job, those entering the nursing home were greeted by a receptionist seen only through glass, which, to Montgomery, gave the entrance a sense of being barricaded rather than welcoming to visitors. After a renovation, the receptionist now sits out in the open in a room that includes an attractive sitting area and a stone fireplace.

The hiring of Montgomery has proved the right choice for the Friends Care Community, according to FCC board President Bruce Bradtmiller in an email this week.

That fitting in with the Quaker-founded care center is linked to shared values, Bradtmiller said.

“His previous position was at a faith-based continuing care facility, so he is comfortable running a complex organization while maintaining values that transcend the bottom line,” Bradtmiller wrote. “That’s consistent with our philosophy here at Friends.”

A longtime villager who is the recipient of FCC services as a resident of the FCC Assisted Living Center, Carl Hyde, a retired former village physician, is also pleased with the new leadership.

“I’m very impressed,” Hyde said this week. “He’s been doing a lot of things that needed to be done but also taking his time, not plunging ahead,” Hyde said, citing the change in the nursing home entrance area as one example of needed changes.

And Montgomery is a frequent visitor in the Assisted Living Center, according to Hyde, stopping in several times a week just to see how things are going. And when Hyde has a complaint, he tells the director, and feels he is taken seriously, and the complaint is addressed.

“He’s always visible,” Hyde said, stating that this is a difference between Montgomery and the previous FCC director.

Montgomery, now 57, wasn’t looking for a new job a year ago when the search firm approached him about taking on the FCC responsibility, he said last week. Former FCC Director Karl Zalar was retiring after 10 years, and a new leader was needed. But Montgomery was happy in his position as director of Grace Brethren Village in Dayton, a 21-acre continuing care facility with 77 independent living cottages, four assisted living beds and a skilled nursing center. The director of Grace Brethren for 13 years, Montgomery had seen success. He’d come at a time of financial crisis and turned the facility around. In his career he’s most proud of that change, he said, as he managed to achieve financial stability without sacrificing resident care. Consequently, Grace Brethren was ranked No. 1 in Montgomery County for Family Satisfaction in a survey by the Ohio Department of Aging and had been named by U.S. News and World Report as one of the top 100 nursing homes in the country.

But he was intrigued by the FCC offer, he said. First, he feels most comfortable in centers that are both nonprofit and faith-based, and fewer and fewer facilities are both. He was also drawn to the close connection between FCC and the Yellow Springs community, which he sees as a strength of Friends Care. And he found the FCC needs to be compelling — FCC was already well-known and well-respected as a top quality caregiver, and was not in a financial crisis. But leaders were seeking to expand, and also needed to address staffing morale.

“When they told me about the challenges, it got my juices flowing,” he said. “But if it had been any other place, I wouldn’t have done it.”

It also helped that the facility is not far from his Beavercreek home, which Montgomery shares with his wife of 27 years, a school nurse, and his almost-18-year-old son, a senior at Beavercreek High School. The couple also has a 22-year-old daughter who lives in Cincinnati.

Regarding facility changes, Montgomery is currently conducting a feasibility study of Friends Care to learn how best to expand, if at all. Currently, the center has 50 beds in its skilled nursing facility, 20 in assisted living and 20 independent living units. The FCC master plan calls for adding 16 beds in assisted living and eight more independent living units; two units are in-process. But leaders will first look closely at the feasibility study before moving ahead, Montgomery said.

A significant challenge Montgomery has faced on the job is linked to potential expansion. Some Yellow Springs community members protested strongly several months ago when a number of trees were felled during the clearing of a lot owned by FCC on the corner of Xenia Avenue and Herman Street. A new sign for the facility now stands on the land, as well as a walking path.

While many of the trees felled were non-native and some were diseased, not all of them were; a few sturdy hardwoods had to be cut down as well. While Montgomery regrets having to cut down the healthy trees, he believes the action was necessary, both to improve Friends’ outside environment, and to prepare land that will likely someday be used to build more independent care units.

“We wanted to make it look more like a park,” he said. “There were some complaints, but I believe people now see the benefits.”

Along with continuing to look at the feasibility of expansion, Montgomery plans to keep working on improving FCC food and staff morale. He’s proud of the reputation of the center, which has, for the past several years, earned five stars — the highest possible rating — in an annual ranking of nursing homes by the Ohio Department of Health. The rankings are based on various staff and resident surveys and measures of health care quality, including a quality matrix from the Centers of Medical Services, or CMS. Only 10 percent of nursing homes achieve the 5-star ranking, he said.

Montgomery also aims to reaffirm the FCC commitment to the Eden Alternative, a national movement that seeks to heighten the livability of nursing homes and the sense of purpose of nursing home residents by introducing such measures as keeping plants and pets on the premises. While FCC has in the past been associated with the Eden project, the connection had loosened, and needs to be formalized, Montgomery said.

He also hopes to improve residents’ quality of life by increasing the number of local volunteers. While FCC has always enjoyed a close relationship with the community — it was started by the local Friends meeting in 1980, in an effort to provide a place for villagers to age in place — more volunteers would enhance the facility even more, Montgomery believes.

“The more you get people in here, the more life you have,” he said, stating that even as FCC residents benefit from the presence of volunteers, the volunteers benefit just as much.

Clear that this will be the last time in his career that he’s leading a continuing care facility, Montgomery is happy to be in the position of helping a strong facility become even stronger. He appreciates the FCC board and the support he’s felt from board members both for himself and for FCC residents. Overall, he is very pleased that Friends Care Community seems to be living up to its name.

“Our mission is to serve others,” he said. “I truly believe that happens here.”