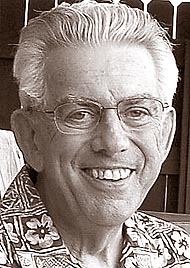 Benjamin Carlson passed away on Jan. 3, 2019, at the age of 82 in Jacksonville, Fla. The cause was congestive heart failure.

He was born in Lorain, Ohio, on May 14, 1936, to Edna Dellinger Carlson and Dr. Benjamin Carlson. Ben and his three older sisters grew up on the shores of Lake Erie, and he developed a love of the water, swimming, sailing and beachcombing that was later expressed in beach trips and ocean cruises all over the world.

After graduating from Lorain High School, Ben attended Earlham College and then earned an MBA from Case Western Reserve University. He returned to Earlham to work as an administrator in the admissions and alumni relations departments. He moved his young family — wife Christine Mills Carlson and daughters Laura and Marianne — to Yellow Springs in 1969, when he was hired as personnel manager at Vernay Laboratories. He was senior vice president at the time he retired from Vernay in 1990. While at Vernay, Ben became interested in the work of Dr. W. Edwards Deming, and he went on to be board chair of the Ohio Quality and Productivity Forum, which hosted annual seminars to study Deming’s ideas.

In Yellow Springs, Ben served as president of the boards of the Community Children’s Center, Yellow Springs Senior Citizens and the Yellow Springs Community Foundation. He was a member of the board of The Antioch Company and Creative Memories for 32 years. He volunteered hundreds of hours as a facilitator and teaching/learning process improvement instructor for schools and school districts in western Ohio and led numerous planning and improvement efforts with the Ohio Department of Education.

In 1990, Ben married Sandra Harshbarger. Ben and Sandy lived in Centerville, Ohio. In 2011, they moved to Jacksonville, where Ben volunteered regularly for the YMCA after-school reading program, Y-Reads, as a mentor/tutor for first- to third-graders, who called him “Mr. Ben.”

Ben had many interests and hobbies, including travel, photography, woodworking and gardening. He once built a balance beam for his daughters to practice on when the Olympic gymnasts captured their imagination in the 1970s, and, when they were grown, he built custom floor-to-ceiling bookcases for their homes. His children and grandchildren always received special birthday cards with a beautiful photograph he had taken. Every house he lived in had a colorful flower garden in front.

After his first heart bypass operation, he became a regular at cardiac rehab. Despite a second bypass surgery and an aortic aneurysm repair, he continued to exercise regularly to keep himself in shape, which, along with medication, extended his life by many years. Health challenges — prostate cancer, macular degeneration, a stroke — kept coming, but Ben took them in stride and joked about coping with what he called “my diminishments.”

As his heart condition began to limit his physical activity, his energy turned to intellectual pursuits. He spent hundreds of hours doing genealogical research and produced a 200-page Carlson family history. In addition to documenting his ancestors, he kept his living relatives in touch with each other three times a year with a family newsletter. As if getting 50 family members to contribute updates wasn’t hard enough, he also produced a biannual newsletter for about 100 Earlham classmates. He corresponded by email regularly with a small group of these classmates, the EC8, who shared their thoughts on life, death, faith, art, politics and many other topics. And he read and read and read.

Ben was preceded in death by a sister, Dr. Ann Carlson Brown; and his stepson, Craig Harshbarger. He will be missed and remembered by his wife, Sandra Brow Carlson, of Jacksonville; daughter, Laura Carlson (husband Tom Hawley), and grandchildren, Liam and Maya Creighton, of Yellow Springs; daughter, Marianne Germond (husband Jon Germond), and grandchildren, Melanie and Sophie Germond, of Portland, Ore.; stepson, Chris Harshbarger (wife Nicole Harshbarger), and grandchildren Joshua and Jordan Harshbarger, of Jacksonville; his sisters, Mary Catherine Carlson Wells, of Columbus, and Alice Carlson Mickey Hard, of Wellsboro, Pa.; three generations of nieces and nephews; and many, many friends and neighbors.

A celebration of Ben’s life will be held at a later date. In lieu of flowers, please make a contribution to One Tree Planted or another environmental organization of your choice.