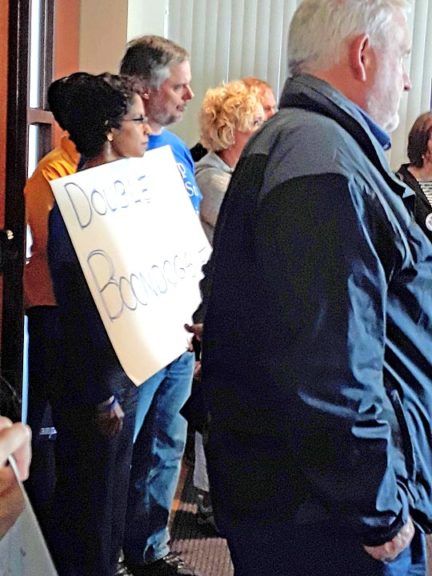 Villager Sirisha Naidu, an associate professor of economics at Wright State University and a member of the faculty union’s leadership team, was one of about 200 faculty members and their supporters who packed a university board of trustees meeting in October to express their frustration and anger about the impasse in contract negotiations. (photo by Carol Simmons)

Wright State University faculty this week took a step closer to going on strike in a continuing contract dispute with university administration.

On Monday, Jan. 7, the union that represents the faculty — the WSU affiliate of the American Association of University Professors, or AAUP — filed a strike notice with the Ohio State Employment Relations Board.

The action came in response to a “last best offer” made by the university’s board of trustees Friday night, Jan. 4.

The issue is locally significant in that a large number of WSU faculty, staff, students, alumni and retired employees have historically been members of the Yellow Springs community.

The strike notice puts in motion steps toward a faculty walkout beginning Tuesday, Jan. 22, according to villager David Seitz, an English Department faculty member. The faculty plans to meet Friday, Jan. 11, for a final decision on the matter.

Contract negotiations, which began more than a year and a half ago, stalled this past summer.
In dispute is the administration’s three-year offer that includes, among other measures: no raises; reduced healthcare benefits with higher premiums and the elimination of any future negotiations over healthcare; an erosion of tenure protections; and new furlough rules that could amount to a five percent cut in pay, according to AAUP-WSU online materials.

$100 million in reserves. The administration has responded to the loss with deep cuts in staffing and programming that faculty members contend have had a profoundly negative impact on the university’s educational mission. Reports last year suggested that it would take the university 20 years to undo the financial damage of the previous six years.

Nevertheless, the university last year avoided being placed on fiscal watch and generated a $10 million surplus.

The faculty, whose salaries and benefits reportedly account for 17 percent of the university’s budget, have argued that the the board’s contract offer is not an effective or appropriate stopgap for Wright State’s financial difficulties.

The faculty, which overwhelmingly rejected a fact-finder’s report in the university’s favor this fall, has to agree to a strike by at least a 60 percent majority, Seitz said.

He said that no one wants to strike, when faculty would go without pay and benefits, but many faculty members feel they have no other choice as long as the university insists on its Friday offer.