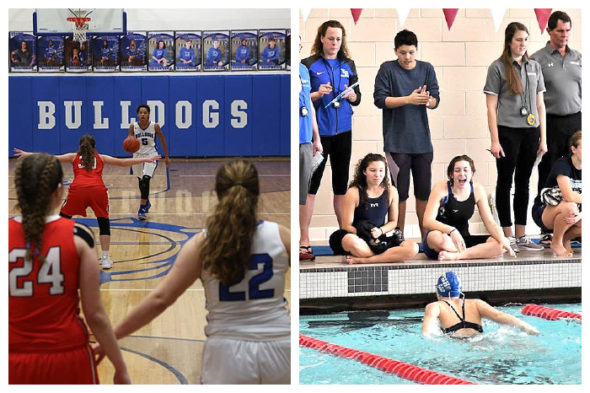 LEFT: Freshman Angie Smith (5) brings the ball downcourt in the Bulldogs’ hard-fought game against the Cedarville Indians on Feb. 4. Isabelle Ellis (22) and the rest of the team played tenacious full court ball, and finished strong, but came up short 63-46. Smith led all players with 32 points in the game. right: Devyn Deal swam the fly leg of the 200 Individual Medley. Cheering her on are, from back left, coaches Bradley Martin and Margaret Swanson, and Trinidad Speck. In front are Jude Meekin and Natalie Galarza. (PHoto (L) by Gary McBride; (R) courtesy of Kathleen Galarza)

Spriggs and Natalie Galarza were both named First Team All Metro Buckeye Conference.

Both the boys and girls teams placed third out of five teams. The three-time champion girls team, with just five athletes, put up a record-setting display, but fell short to a 26-strong Dayton Christian squad and a very strong Troy Christian team. The boys team put together their best showing since 2016, anchored by five seniors.

For the girls: Natalie Galarza, who placed in long-distance events just a few weeks ago, quickly acclimated and won both the 200 free and 500 free.

Eden Spriggs, although sick, took home her 12th career conference title in the 100 free, and swam a lifetime best in the 50 and placed third.

For the boys: David Walker had the best individual showing in years from a YSHS male swimmer, finishing second in the 200 IM and 100 free.

Trystan Burch placed fourth in both the 100 back and 200 free. William Gregor placed fourth in the 100 breaststroke and sixth in the 200 IM. Seventh-place finishes were had each by Tariq Muhammad (100 breaststroke, lifetime best), Trinidad Speck (100 back), and Harper Mesure (100 fly). Both the 200 free (Burch, Gregor, Muhammad, Walker) and 400 free relay (Burch, Mesure, Speck, Walker) placed third.

The Bulldogs return this weekend to Trotwood for the Sectional Tournament, which is the first step to state competitions. The boys team competes Friday evening at 6:30 p.m., and the girls team competes Saturday morning at 10 a.m.

High School boys at home and away

Monday, Jan. 28, brought the Eagles of East Dayton Christian to town to face the boys varsity Bulldogs. After the first quarter ended in a tie, the Bulldogs pulled ahead of the Eagles thanks to explosive scoring by senior Andrew Clark, who had 33 points, and freshman DeAndre Cowen, who added 24 points. The ’Dogs defensive effort was led by senior Teymour Fultz, who had a season-high 15 rebounds. The Eagles could never catch up to the Bulldogs, and Yellow Springs walked away with the W, winning 74–62.

The varsity and JV teams traveled through the snow to Troy Christian on Friday, Feb. 1. The junior varsity squad was led in scoring by freshman Noah Van Hoose, who had 5 points, followed by seniors Mateus Cussioli and Tariq Muhammad, who each added two field goals. But the JV Bulldogs couldn’t match the JV Eagles in scoring, as the YS boys lost 36–18.

The varsity boys played a much stronger game against Troy Christian than they had in their previous matchup at the beginning of January. The Bulldogs scoring was led by senior Kevin Wagner, who netted 12 points, including 5 free throws. Seniors Clark and Trey Anderson added 8 points each to the team’s total. Clark and Fultz led the defensive effort with seven and six rebounds respectively. But despite leading at halftime, the Bulldogs couldn’t overcome the Eagles’ high scoring third quarter, losing the game 41–56.

The Milton-Union Bulldogs arrived Saturday, Feb. 2, to take on our varsity and JV squads. The JV Bulldogs started strong, leading the game at the end of the first quarter –– thanks to two three-point baskets from sophomore Romel Phillips and one three-pointer from Sam Lewis –– and the game was tied going into halftime. But the boys from Milton shut down the YS scorers in the second half and held on to win 37–20.

In an incredibly physical game, the Yellow Springs boys varsity played hard against the Bulldogs from Milton-Union, with Yellow Springs leading the game at halftime, 26–20. Cowen was dominant in the first half, scoring five field goals and making two free throws in the first quarter alone. But Milton-Union came out strong after halftime, taking the lead with a 20-point scoring effort in the third quarter. With the YS boys trailing by 8 points with less than a minute to go in the game, Anderson made a clutch three-point basket and was quickly fouled, then made both of his free throws. The Milton lead now cut to 3 points, the Yellow Springs ‘Dogs could practically taste an overtime game. But a buzzer-beater three-point basket was slightly off the mark and the Milton boys would go home with a hard-fought win, 50–47. Yellow Springs varsity scoring was led by Anderson, who had 15 points, followed closely by Wagner with 14 points and Clark with 12 points. Freshman Dimitri Wallace led the Bulldogs in defense with 7 rebounds.