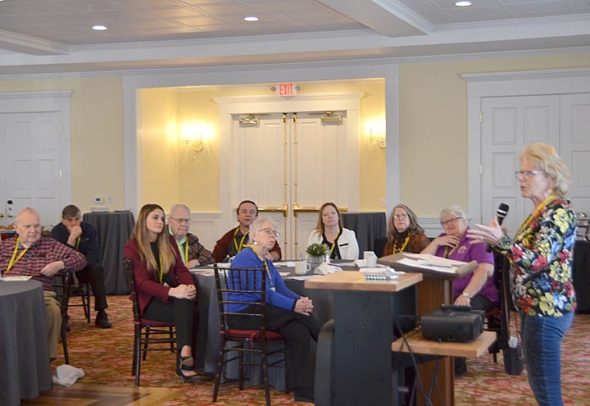 At last Friday’s wrap-up breakfast for Dementia Friendly Yellow Springs, Gilah Pomeranz spoke on the project’s positive effects on downtown businesses. About 50 people attended the event, which brought the 18-month project, sponsored by the Yellow Springs Senior Center, to an end. (Photo by Diane Chiddister)

During the year-and-a-half duration of the Dementia Friendly Yellow Springs project, organizers were most surprised by the number of people who approached them to say they personally had a connection to the disease.

If the village lines up with national averages, about one in 10 of those over 65, and one in three of those over 85, has some form of the disease. Because about a quarter of the local population is over 65, several hundred villagers likely struggle with memory loss. Add in villagers who are caregivers, or who have parents or family members with dementia, and the number of local people affected reaches hundreds more.

“It touches so many, many lives,” said Yellow Springs Senior Center Director Karen Wolford this week.

To Wolford, the most significant impact of the Dementia Friendly Yellow Springs project was normalizing dementia so that those affected could come forward.

“I think this brought people out of the shadows,” Wolford said. “I think they felt more freedom to say, I have dementia, or, I’m taking care of someone with dementia.”

Coming out of the shadows is critical because that allows people to ask for help, and to receive it, according to Wolford.

To DFYS co-organizer Toni Dosik, the most significant impact of the project was raising awareness about the disease, whether people are personally affected or not.

“People became more aware of their friends and neighbors who either have dementia, or are providing care for someone who has it,” she said.

Dementia Friendly Yellow Springs presented the results of its 18-month project last Friday, March 22, at a wrap-up breakfast. The event, attended by about 50 people, took place at the Mills Park Hotel. The project was launched in early fall, 2017, and recently officially ended.

The purpose of Dementia Friendly Yellow Springs was to “enhance the dignity and quality of life of seniors in Yellow Springs and Miami Township,” according to Wolford in her opening remarks.

And while the official part of the project is now over, “We are celebrating, but our work is not done,” she said.

The project’s main focus was providing training for “various sectors of Yellow Springs on what dementia is, and how best to interact with someone who has it,” Dosik said at the breakfast. However, the project organizers also “ended up doing a million other things” as well.

Over the year and a half, the project held 12 trainings for 179 participants that focused on teaching people how to interact with those with dementia, led by Director Karen Puterbaugh of the Greene County Council on Aging. The trainings were given to employees of the Yellow Springs Library, Village of Yellow Springs, Yellow Springs Senior Center, and members of the Yellow Springs Chamber of Commerce, Methodist Church, Presbyterian Church, Dharma Center and the Unitarian/Universalist Fellowship.

An advisory committee for the project was also formed, with 27 members representing various sectors of Yellow Springs. The group held two meetings.

Project activities also included the showing of a film, “The Genius of Marion,” a documentary about a woman with dementia, shown last fall at the Little Art Theatre. The film attracted a full-house crowd, and had the highest attendance of any non-profit film shown at the theater, according to Dosik.

Yellow Springs has also been accepted as a member of Dementia Friendly America.

An ongoing support group for caregivers of those with dementia formed during the project and continues to meet two times monthly. The group, which is open to anyone who is a caregiver, meets at 5:30 to 7 p.m. every other Tuesday at the Yellow Springs Methodist Church; it next meets on April 2.

The support group is a “close and caring group,” according to member Libby Hammond, whose father has dementia. “It has become an important help in my journey with my dad,” she said at the breakfast.

Introducing Hammond was Kate LeVesconte, the co-organizer of the DFYS project, and facilitator, with Methodist Pastor Rick Jones, of the group.

Other DFYS breakfast speakers included Gilah Rittenhouse, who spoke on the effects of the project on the local business community. As owner of Yellow Springs Hardware, Rittenhouse said she had not known before buying the business how many customers would be villagers dealing with dementia. The challenges of dementia can cause anxiety for employees, according to Rittenhouse, who said the DFYS training helped to increase understanding and patience with customers.

Speaker Karen Durgens talked about the challenges of dementia for African-American villagers. Alzheimers affects African Americans at two times the rate of whites, Durgens said, stating that “this is both a family and a community affair,” and that some villagers with dementia “need a little more” support from the community.

In her remarks, Mayor Pam Conine, also a member of the DFYS Advisory Committee, emphasized that the disease affects all segments of the village.

“It affects so many of us in so many different ways,” she said.

In an interview this week, Wolford said she first became aware of the possibility of becoming a Dementia Friendly town about five years ago, when a villager brought her a newspaper article on the national Dementia Friendly project and urged her to consider it. New to her job, Wolford filed the dementia project at the bottom of her list of things to do. But in subsequent years, she became more aware of the prevalence of dementia in the village. On several occasions, downtown businesses contacted the Senior Center because employees were having trouble serving customers with dementia, and on more than one occasion, the center was called in to help the police department in similar circumstances.

“It was surprising, the number of people touched by it,” she said.

When an invitation to submit a grant application for the DelMar Social Innovation Award for Older Adult Programming through the Dayton Foundation crossed Wolford’s desk, she dashed off a preliminary proposal for a local dementia-friendly project.

“I thought, this is about as socially innovative as I can get,” she said, not expecting to receive funding.

However, the foundation asked for a more detailed grant proposal. At that point, Wolford took the project to the Senior Center board for approval. At the meeting, board members indicated enthusiastic support, while also offering their personal stories of connections with those with dementia.

The DelMar funding, for $25,500, came through. A proposal to the Yellow Springs Foundation, for $12,500, was also approved for the project. With the funding, Wolford hired LeVesconte and Dosik to oversee the project. Dementia Friendly Yellow Springs launched in fall 2017 with a breakfast attended by about 60 people.

While the funding for the 18-month project is now over, it’s clear to Senior Center leaders that efforts toward helping those with dementia will continue. At the recommendation of the DFYS Advisory Commitee, the center has begun collaboration with Dementia Adventure, a program in the United Kingdom that organizes trips and activities for those with dementia and their caregivers. Contact has been made with the Five Rivers Metro Parks to develop a local Dementia Adventure program.

The committee also recommended that the Senior Center explore Memory in a Box, a project that uses an individual’s photos and objects to stimulate discussion. The center is also exploring becoming an Age Friendly community, part of a national program.

According to Dosik, Dementia Friendly Yellow Springs helped organizers understand not just the challenges of dementia, but the opportunities as well.

Those opportunities include programs such as Dementia Adventures, she said, which encourages dementia patients and their caregivers to take trips and have new adventures.

“It reminds us that, whatever our limits are, there are always opportunities,” she said.

“The Dementia Friendly experience highlights that we should be interacting with all of our friends and neighbors with care, compassion and great patience,” Puterbaugh said.