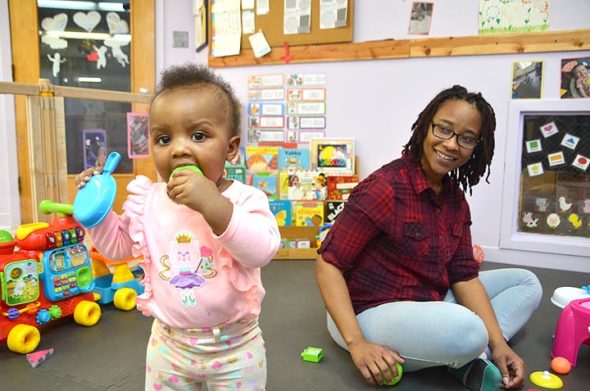 Cuteness alert: there are new babies in town.

“There’s such a need,” she said. “Parents are going back to work sooner, and there aren’t many options for infant care in Yellow Springs.”

Local families rely on relatives, neighbors and home-based care providers, according to Doster, who prioritized adding an infant program when she was hired to direct the nearly 75-year-old nonprofit in November 2017. The infant program expands the center’s longtime daycare programs serving toddlers and preschoolers. YSCCC also runs an after-school program geared to school-aged children.

Nationally, about 60 percent of mothers with children under age three are employed. And Ohio was recently identified as a “child care desert” in a report on infant and toddler care by the Center for American Progress, a think tank, meaning that statewide there are more than three young children for each licensed care slot. Availability and cost of child care pose challenges for most families nationwide, the report states.

For one area family, the infant program opened just in time. Jerusha and Roland Eliason recently decided to enroll both their children, Evelyn, 21 months, and Charlotte, 10 weeks, at YSCCC. While the family lives in Fairborn, both parents work in Yellow Springs — Jerusha at Town Drug and Roland as a chef at the Winds Cafe.

“It’s so convenient to have both children in one place nearby,” Jerusha Eliason said.

Tuition at YSCCC is comparable to other area day care centers the Eliasons have tried, but the quality of care is “so fantastic,” according to Eliason. “They really care,” she said.

“Already she’s moving her head up more, cooing, reacting to comfort. They are paying attention to all that,” Eliason said.

Expanding to infant care was part of YSCCC’s strategic plan for 2018, according to board president Caroline Mullin. But the program got up and running — or up and crawling — even more quickly than expected.

YSCCC was already licensed to provide infant care, but hadn’t done so in a number of years, according to Mullin. Adding the infant program entailed creating a safe, inviting and age-appropriate space at the center, and hiring a qualified teacher. The program passed state inspection in November.

On a recent afternoon, the infant room was buzzing. And humming and cooing. Baby Charlotte, Zsa’Lynn, 10 months, and Andre, 9 months, were enjoying a period of rest and play with their two infant caregivers, lead teacher, Aille Turner, 27, and assistant teacher, Sade Martin, 26. Turner has been working in child care for about nine years, and is certified to care for infants and toddlers.

“I love this work,” she said. “I like being around kids, watching them grow and learn.”

Her focus is on giving children a range of hands-on experiences to promote social, emotional and physical growth. A recent activity involved a bucket of different colored pasta with some softer items interspersed, to introduce the children to new textures and colors. Turner has also been teaching the children baby sign language. The sign for food is the fingers and thumb of one hand brought together and lifted to the mouth. When Turner demonstrated, Zsa’Lynn got excited.

“She loves that one,” Turner said. Signs are an important part of the infants’ learning, allowing them to express their needs, she added.

“Of course, they’re babies, so they also cry a lot,” she added, laughing.

“I read books with them, I play with them,” she said. “They change a lot in what they can do.”

The new infant room is a large space adjacent to the toddler room — there’s even a window at floor level between the two rooms where toddlers and infants can play peek-a-boo through the glass. Painted lavender, the infant room includes a large play area with soft flooring  that is lined with shelves of books and toys. There’s a changing room, a row of cribs by the windows that look out to the toddlers’ play yard, a kitchen area and a soft rocking chair for mothers who opt to pump or nurse.

One of those mothers is Doster herself, whose nine-month-old son, Andre, is enrolled at the center. Doster’s two other children also take part in center programs. She counts herself an enthusiastic parent as well as the center’s administrator.

“It’s so exciting as a parent. Everything they see, I see at home — they’re spot-on,” she said of the detailed progress reports Turner and other teachers prepare.

If the program expansion is a boon to area parents, center supporters hope it also provides a leg-up for YSCCC itself. The center has been challenged by leadership and staff turnover, enrollment declines and budget shortfalls in recent years.

Enrollment is currently 66, about the same as when Doster came on board. The center can accommodate a total of 101 children. The majority of enrolled children are from families who live outside the village, but work here or at locations nearby, according to Doster. About seven children, or 10 percent, live in Yellow Springs.

“We’re marketing ourselves to local employers, and reaching out to the surrounding counties,” she said.

In addition to four in the infant program, the center currently serves 14 toddlers and 20 preschoolers, as well as 28 school-aged children offsite at Mills Lawn for after-school care. Enrollment is now underway for the center’s June through August summer program for children aged six through 11. Spots are still available.

About 40 percent of the center’s children receive publicly funded child care under Title XX, which subsidizes the cost of care for lower-income families.

YSCCC is stabilizing and rebounding in other ways. The center recently applied to receive one star under the state’s Step Up to Quality program, a measure of child care excellence that emphasizes teacher training and lesson planning. YSCCC was previously rated under that program, but lost its star during leadership changes several years ago.

Doster expects the center to earn a star before the summer. In order to continue receiving public funding, all child care centers in the state will need to attain one star by July 2020, according to new state guidelines.

And Doster is preparing to go beyond the one star, applying for a three-star rating, which she hopes the center will earn by the end of the year.

Overall, finances at the center are better than when she first started, according to Doster. The most recent annual report shows that YSCCC remains substantially supported by a single local donor, with additional support from just a few other donors. It is typical of nonprofit child care centers that tuition alone does not cover operating expenses, according to board president Mullin.

“We’ll always need to make up the difference with donations,” she said. “We’ve had some very generous support from a handful of donors, and we’re looking to diversify that base.”

The center is seeking $80,000 in community donations this year, she said.

Community donations — of money, toys and books — helped make the infant program possible, together with leadership from Doster, according to Mullin.

“Malissa was great in leading this. She made it happen,” Mullin said.

Back in the infant room, the mood tilted from mellow to a little fussy. Turner and Martin were swift to respond with songs and comfort. Andre got fascinated by a truck, Zsa’Lynn by her bottle. Sleepy baby Charlotte was put down for a nap.

“Welcome to the world of the littles,” Doster said.