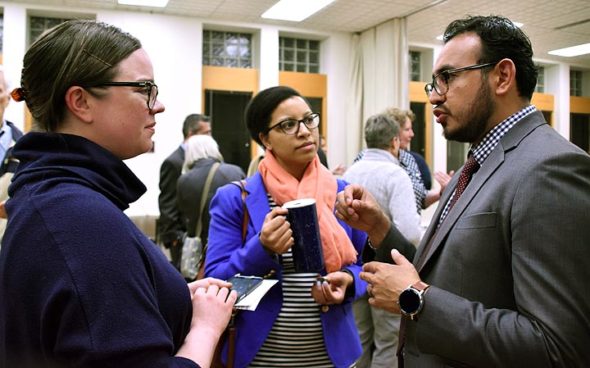 Josue Salmeron, right, is expected to be appointed the new Yellow Springs Village manager by Council at its May 6 meeting. Here Salmeron spoke with Home, Inc. director Emily Seibel, left, and Council member Kineta Sanford, center, after the candidate forum on April 10. (Photo by Luciana Lieff)

Salmeron to be appointed as new manager

Village Council is expected to appoint Josue Salmeron as the new Village Manager of Yellow Springs at its meeting tonight, Monday, May 6.

Last week, Council President Brian Housh announced that the Village and Salmeron had agreed on a contract. His start date is June 17.

Reached by phone last week, Salmeron said he is looking forward to the opportunity to serve the community thirteen years after graduating from Antioch College.

“It’s so exciting to be making this move,” Salmeron said. “Yellow Springs gave me so much in my younger years and I feel so honored to be giving back in all the ways that I can.”

Salmeron will be moving from Washington, D.C., with his wife, Tania Hutchinson, who is also an Antioch alum, and their two children — Ahnika, 6, and Josue Brooks, 3.

After hearing citizens’ concerns and Council priorities during his candidate visit, Salmeron said he is likely to begin his tenure by tackling issues of community policing and affordability, including housing costs and utility rates.

“Those are two key issues because they affect folks’ lives day-to-day — how they feel about their safety and how affordable their community is,” Salmeron said.

But first, he plans on learning the ropes, such as by shadowing current Village Manager Patti Bates, who retires at the end of June.

“There will be a lot of learning,” he added. “I don’t think I’d be doing a service to the village to have a five-point plan ready to implement when I come in.”

According to a tentative contract, Salmeron’s starting salary will be $105,000 and the initial contract is for three years. Salmeron is the 10th full-time manager appointed since the town adopted the Council-manager form of government in 1952.

Last week, Council members highlighted the fact that Salmeron is a “nontraditional candidate” who might offer new leadership during a time of change in the community. They also said that from the beginning the goal was to “cast a wide net” to find the best candidate.

Council Vice President Marianne MacQueen wrote in an email that Salmeron might provide leadership not just for the Village, “but for the community as a whole.”

“I appreciate that he is young and provides diversity that is critical as we forge a new identity,” MacQueen wrote.

Although Salmeron has not served in the role of village or city manager previously, Council members were confident that the skills he developed during his career in community development and affordable housing would apply well to the position.

Council made its choice based upon their own assessment and feedback from villagers, members said. Salmeron and Allyson Murray were virtually tied for the top rating from 92 villagers and Village staff who completed candidate feedback forms, the News previously reported.

Read the full story in the May 2 issue of the News.

One Response to “Salmeron to be appointed as new manager”