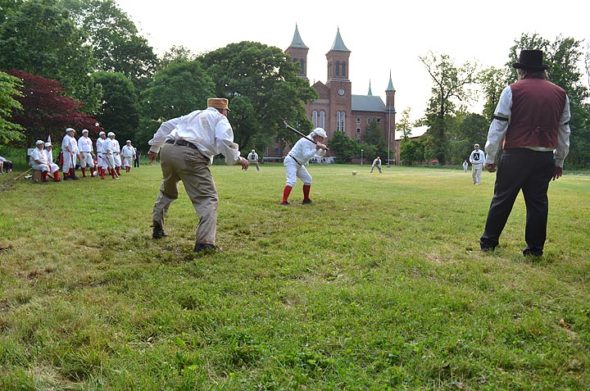 The Antioch Nine were pitched against the Cincinnati Red Stockings in a makeup for a rain game that was called over 150 years ago. A perfect evening accommodated the May 31, 2019, period re-enactment, which drew nearly 100 fans and saw the Red Stockings beat the Antioch Nine by seven runs. (Photo by Megan Bachman)

It took 150 years to make up the game after it was rained out, but on Friday, May 31, the Cincinnati Red Stockings finally prevailed 14–7 over the local Antioch Nine on the Antioch College campus.

Originally scheduled for May 31, 1869, it would have been the first ever professional baseball game, making the village a site for baseball history — had it not been for the rain.

Call it a cancelation, or call it a postponement; either way, the Red Stockings boarded the train back in 1869 for their second scheduled game, against the Mansfield Independents, with their contest against the Antioch Nine never resolved.

At least, not until Friday.

Starring in the re-enactment were two area vintage base ball clubs — the 1869 Cincinnati Red Stockings Vintage Base Ball Club and the Champion City Reapers of Springfield, who stood in for the long-defunct Antioch Nine.

Under clear skies, nearly 100 fans crowded their lawn chairs perpendicular to Corry Street, loomed over by grandiose Antioch Hall, to watch the historic game that never was. Cheered on as the home team, Antioch had the lead most of the game until a seventh-inning rally put Cincinnati permanently on top in an eight-inning contest, cut one inning short by the setting of the sun.

During the Cincinnati Red Stockings’ inaugural season in 1869, club president and former Antioch student Aaron Champion hoped to showcase his all-professional baseball team — the first ever — to the country’s stiffest competition, primarily consisting of teams in the east. Champion had received no guidance or assistance from the National Association of Base Ball Players in normalizing scheduling, and so planned his own tour of the mid-Atlantic coast.

Yellow Springs was a logical starting point for the Red Stockings’ tour northbound to Cleveland, eastward to Buffalo, and eventually to Brooklyn and Washington, D.C. Fielding an all-professional team and subsequently touring eastern cities was a costly proposition. According to John Erardi and Cincinnati Reds historian Greg Rhodes in their book, “The First Boys of Summer,” when the team “boarded the train at the Little Miami Railroad Depot on the eastern edge of downtown” to head toward Yellow Springs and officially kick off their Eastern tour, “just $24 remained” to cover all expenses. That is, until an official game could be played, and the Red Stockings would take their 50 percent share of the gate.

To stake the costly journey eastbound, and to sharpen the play of his 10 salaried players, Champion scheduled games throughout Ohio and New York state. This would ensure that, before reaching the coast, the Red Stockings would be at their best, both athletically and financially.

Little is known of the Antioch Nine circa 1869, but they were no strangers to the Red Stockings. On May 15, 1869, the Antioch Nine had lost a preseason game, 41–7, to the Red Stockings on Union Grounds, the latter’s home field. Though they perhaps fielded an inferior brand of baseball compared to the professional Red Stockings, and even to the semi-professional teams they regularly faced, by all extant accounts, the Antioch team was not averse to taking on superior competition. The Nine were also reasonably well-supported by the college, as evidenced by their new 1869 uniforms.

On Friday, the home team struck first, tallying four runs in the first frame, after which point offensive production for both clubs was sparse. The Red Stockings slowly clawed their way back with one run in the third inning and three in the fourth.

The Red Stockings, despite the “good ginger” (hustle) of the host team, added to their total in the seventh inning and, in the eighth, scored eight more, securing not only their 2019 victory, but also perhaps a retroactive victory in the 1869 match.

Ohio is rich with vintage baseball clubs, which compete with period-authentic equipment, in period reproduction uniforms and play by 19th-century rules. Dayton and Springfield boast multiple teams, as do Cincinnati, Columbus and cities in the northern part of the state. The most conspicuous difference between mid-19th century “base ball” and today’s baseball — besides the difference in spelling — is the absence of gloves.

The ball is slightly softer than those currently used in the Major Leagues, but sore hands are a fact of life for vintage baseball participants, and fielding a fly ball can be a dangerous proposition. Late in Friday’s game, in fact, as the Reapers/Antioch Nine’s fleet-of-foot left fielder, Rickey “String Bean” Craig, chased down a hard hit fly, his game was ended prematurely by a possibly broken finger.

The Red Stockings and the Reapers/Antioch Nine, captained respectively by Mike “Speedy” Obermeyer, and Ben “Juggler” McLaughlin, showcased not only the physical structure of the game as it was played in 1869, but also its gentility. When asked about the appeal of vintage base ball, several participants, including Red Stockings treasurer and historian Larry “Knuckles” Phillips, said that many potential players are turned off by the “angry softball crowd.” The game’s umpire, Joel “Jeremiah Morrow Jr.” Hendrix, who is also a regular member of the Eastwood Iron Horses, expressed similar views.

“Everybody is doing their best to be a good sport and follow the rules,” said Hendrix.

The true hero of the day, Scott Sanders, Antioch archivist and fount of all knowledge historic, was awarded the game ball at the end of the contest to recognize his efforts toward making the game possible.

Asked whether he worried that rain showers earlier in the day might threaten a repeat of the 150-year-old rainout, Sanders said he wasn’t worried.

“Whether it’s a rainout or the game goes on,” said Sanders, “history will come full circle tonight.”

*Fife is a local amateur historian, writer and professor of English at Clark State College.