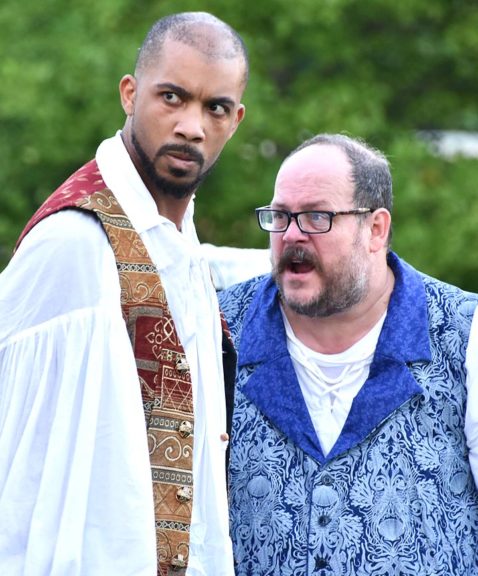 Elias Kelley, left, gave a powerful performance as the titular character in the Yellow Springs Theater Company’s production of “Othello.” Here, he stands beside an indignant John Wysong, who played the roles of citizen, soldier and senator. (Photo by Luciana Lieff)

“How am I the villain?” asks the character Iago near the end of the first act of Shakespeare’s “Othello.” The question is disingenuous, of course — Iago is widely regarded as Shakespeare’s greatest villain, and Iago sure seems to know it — but it’s worth thinking about. The YS Theater Company’s Summer Shakespeare Shindig production of “Othello,” which continues this weekend with its final performances, ponders the question in a lively and worthy production.

For those who don’t know, “Othello” concerns the secret machinations of the evil Iago against the titular Othello, “the Moor,” one of the few Shakespeare characters written as a person of color. Using the women of his acquaintance as bait, Iago is able to trick nearly every man around him into some kind of chicanery, and eventually — spoiler alert! — drives Othello to murder.

This year’s Summer Shakespeare Shindig features a smaller cast and a strong group of leads. Shindig newcomers Anna Knippling and Elias Kelley are incredibly well cast; Knippling’s Desdemona is sweet and beguiling — and she has a tremendous singing voice, which audience members will enjoy in the play’s second half — and she makes you wonder how anyone could ever suspect her of anything untoward. As Othello, Kelley is handsome and immediately charming, stopping just short of swagger, but his bravado can give way to tenderness and raw feeling in a heartbreaking instant. He commands the stage with ease and grace, and his character’s asides, spoken with passion, have the thrilling effect of seemingly pulling the audience right into Othello’s heart and mind.

YSTC veterans Kayla Graham and Garrett Young play Emilia and Iago — they’re that couple who makes everyone wonder why they’re still together, since they clearly hate one another. Though Emilia is indirectly responsible for much of the tragedy that results from her husband’s actions, Graham plays her as neither hateful nor stupid, but with a veneer of careless boredom that hides a deep unhappiness with her marriage and fury over her position in life. Graham also parses the play’s language in a way that’s easy on the ear, combined with a natural acting style that brings the lofty diction of old into the present moment. And where to start with Young’s Iago? He’s pitch perfect in nearly every scene — which is to say, you will want to slap his smug face. He plays this Iago with the same caustic energy as a seething internet troll turned loose on stage —  which is appropriate, as several of his speeches could easily be anti-feminist rants dressed up in Elizabethan prose. He stalks the stage like so many Jordan Petersons: loathsome, but charismatic — which is more than a little troubling.

A few other actors stood out as well: Alisa Meier and Emily Parsons, both cast in a handful of different roles, were fun to watch onstage, particularly in the drunken party scene where they flirt in the background as a barmaid and a soldier, respectively. The two also have a fine command of Shakespeare’s language and strong voices, which is critical for outdoor theater. (This is your official reminder to pack your lawn chairs and come early so you can get a seat close to the stage — not all of the actors’ voices carry to the back of the audience.)

The play is presented by Director Lorrie Sparrow-Knapp in a fairly straightforward fashion: the action takes place in an unspecified, but prior time period, with lovely, Regency-inspired costumes. The stage is dual-leveled and minimalist, decorated in gauzy white, as though the events of the play are taking place in some timeless Aristotelian aether. These elements are punctuated by the production’s only conspicuously modern touch: scene changes are accompanied by the music of hip hop artist Issa Ali. Though the music was recorded for the first weekend’s performances, Issa Ali will perform live during the show for the second weekend — those who saw the first weekend’s performance may want to come back again for what will surely be a different kind of performance. The play runs just shy of three hours, with the first half a surprisingly quick 80 minutes, followed by a 10-minute intermission.

Audiences will note that “Othello” is sprinkled with casual racist slurs that are fairly uncomfortable to the 2019 ear. Other than these, however, the play doesn’t directly confront racism, other than to show that it exists. Misogyny comes under a little more scrutiny; Iago frequently riffs on women as being sexually deviant and inferior, but Emilia claps back, saying of men: “They are all but stomachs, and we all but food; they eat us hungerly, and, when they are full, they belch us.” Nevertheless, it’s still a man’s world in “Othello,” and everybody more or less goes along with it.

So what can “Othello,” written more than 400 years ago, teach us in 2019? I’ll hearken back to Iago’s question, cited at the top of the review: Is he the villain of this play? Of course he is — but all of the men around him share the blame for the violence to which they consent. Men who had the potential to be good and honorable allowed themselves to be seduced by fear and animosity — were, in fact, happy to do so. They didn’t recognize Iago for the hatemonger he was, and allowed him to light the tinder of their anxieties and prejudices until they burst into violent action.

This is the message “Othello” sends down to us in the 21st century, when so many voices have access to our ears: keep a watchful eye out for the hatemongers, don’t be deceived by them — and for God’s sake, call them out, before it’s too late.

“Othello” will be performed Friday and Saturday, July 19 and 20, 8 p.m., on the grounds behind Mills Lawn, with pre-show music beginning at 7:30 p.m. The performance is free, and donations will benefit future YSTC productions.

Cast: Elias Kelley as Othello, Garrett Young as Iago, Kayla Graham as Emilia, Anna Knippling as Desdemona, Chelsey Hall as Bianca, Franco Villongco as Cassio, Jeremy Holtgrave as Gratiano, Ed Knapp as Brabantio, Alisa Meier as Duke of Venice and others, Jonah Trillana as Roderigo, David Walker as Clown and Servant to Othello and Lucas Sansom, Emily Parsons and John Wysong as Citizens, Senators and Soldiers of Venice and Cyprus.

The writer is a member of YSTC.