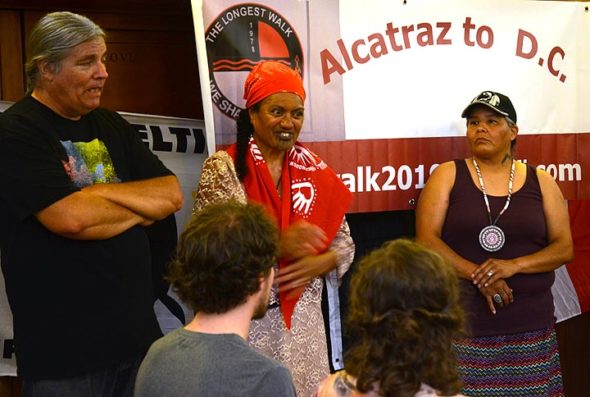 Five Native American activists who are crossing the country in a five-month trek called “The Longest Walk: We Shall Continue” stopped Thursday, June 27, at Rockford Chapel on the Antioch College campus to share information about their journey and the 11 issues they carry. Pictured, from left, are walkers Michael Lane, Sharon Heta and Cynthia Young. (Photo by Carol Simmons)

On the 137th day of a planned 155-day walk across the country, a small group of Native American activists stopped last week at Rockford Chapel on the Antioch College campus — on land where the Shawnee and Miami people once lived — to talk about the issues that led them to spend five months on the road.

Titled “The Longest Walk: We Shall Continue,” the more than 2,300-mile journey began Feb. 11 in San Francisco with the goal of concluding July 15 in Washington, D.C. The effort echoes the route of the original Longest Walk, which took place in 1978 in support of tribal land and water rights. Several other cross-country walks have occurred since then, as well, including one in 2008 and another in 2013 that also came through the area.

Activist and educator Michael Lane, from Bemidji, Minn., and of the Menominee Nation, has participated in four walks, including the first, and he experienced a threatening police encounter in Columbus in 2008 that made national news.

He and four other walkers, including three grandmothers, met with a small local gathering Thursday evening, June 27, after traveling 23 miles earlier in the day.

“Why do we keep doing this?” Lane asked.

The 2019 walkers are bringing 11 issues forward as they make their way to the U.S. Capitol. Those issues highlight protection of children, women, the environment, spiritual freedom and indigenous knowledge, as well as calls for jurisdictional autonomy and sustainable economies. They are detailed on the group’s Facebook page: The Longest Walk: We Shall Continue.

While the native walkers are sometimes described as protesters, Lane asserted that “this is not a protest walk.”

“This is a spiritual walk,” he said.

His wife, Sharon Heta, who is Maori from New Zealand, agreed.

She said that she is particularly focused on the plight of “native children incarcerated and locked up in cages on the [Mexican] border.

“I breath in the suffering they go though and breath out love and compassion.”

She walks and prays because “that’s something I can do,” she said. “That’s my joy.”

Cynthia Young, who identified herself as Standing Rock Sioux, said she walks for her grandchildren and “for the sacred sites and for our water.”

Young said she is also following in the footsteps of her father, who joined the 1978 walk from Chicago.

Sheri Potts, from Reno, Nev., said she walks with thoughts of those “who can’t,” including a son who was murdered several years ago and a friend who recently died of cancer.

“We need to work together to have a better world,” she said.

While the group feels that the new walk is necessary, the walkers acknowledged that the journey can be difficult.

Carl Sampson, who at 37 years of age is the youngest in the core group, noted that they had encountered “snow, wind, rain, tornado warnings and flood warnings” along their way.

Still, he said he is grateful to be part of the effort.

“I thank the Creator to be able to do what I do,” he said.

Lane said that when it came to inclement weather, the group put their “we shall continue” motto to work, describing being detoured by extensive flooding in Kansas, where one warning sign instructed, “Do not drown today.”

Dayton-based activist Corine Fairbanks, who was housing the walkers at her home for the night, said she was grateful for their presence and their work.

“I can’t even imagine walking over 2,300 miles,” she said. “This truly is a sacrifice on their part, and also on their families, to pray for all of us.”

Lane told the gathering that the group continues because the issues they carry are urgent, though not new.

“These are some of the serious issues that have been going on for hundreds of years,” he said.

In essence, they all come down to inherent human rights, Lane said.

“These issues transcend borders,” he concluded.

“We’re not going to D.C. with hat in hand to Congress or the Executive Branch. We’re on a spiritual walk.”

One Response to “The Longest Walk 2019— Spiritual journey makes stop”